narrow, swift currents or tubes of air found at heights ranging from 7 to 8 mi (11.3–12.9 km) above the surface of the earth. They are caused by great temperature differences between adjacent air massesair mass,
large body of air within the earth's atmosphere in which temperature and humidity, although varying at different heights, remain similar throughout the body at any one height.
..... Click the link for more information. . There are four major jet streams. Although discontinuous at some points, they circle the globe at middle and polar latitudes, both in each hemisphere. The mean position of the stream in the Northern Hemisphere is between lat. 20 and 50 degrees N; the polar stream is between lat 30 and 70 degrees N. Wind speeds average 35 mi (56.3 km) per hr in summer and 75 mi (120.7 km) per hr in winter, although speeds as high as 200 mi (321.9 km) per hr have been recorded. Instead of moving along a straight line, the jet stream flows in a wavelike fashion; the waves propagate eastward (in the Northern Hemisphere) at speeds considerably slower than the wind speed itself. Since the progress of an airplane is aided or impeded depending on whether tail winds or head winds are encountered, in the Northern Hemisphere the jet stream is sought by eastbound aircraft, in order to gain speed and save fuel, and avoided by westbound aircraft.
The Columbia Electronic Encyclopedia™ Copyright © 2013, Columbia University Press. Licensed from Columbia University Press. All rights reserved. www.cc.columbia.edu/cu/cup/
The following article is from The Great Soviet Encyclopedia (1979). It might be outdated or ideologically biased.

an air current in the upper troposphere and lower stratosphere with an almost horizontal axis. A jet stream is characterized by high velocities, relatively small transverse dimensions, and large vertical and lateral wind shears. It resembles a gigantic jet within the relatively weak winds of the surrounding atmosphere. Jet streams are thousands of kilometers long, hundreds of kilometers wide, and several kilometers deep. The maximum wind speeds are observed at the axis of a jet stream and may vary from 108 km/hr to 250–350 km/hr. Jet streams may have a significant effect on the ground speed of modern airplanes; the strong turbulence in the vicinity of jet streams also affects flight.

Tropospheric jet streams outside the tropical latitudes arise from frontal zones (polar fronts) between air masses of the troposphere. The strong lateral temperature gradients in these zones give rise to strong pressure gradients and strong winds in the upper troposphere and lower stratosphere. The axes of jet streams are most frequently near the tropopause at altitudes between 7 and 12 km; the altitudes are higher during the summer than during the winter. These jet streams are displaced and develop in connection with cyclonic activity at fronts. At the highest latitudes, jet streams are less intense and are found at lower altitudes owing to arctic and antarctic fronts. At subtropical latitudes (25°–40°), more stable, subtropical jet streams are observed with axes at altitudes of 12 to 14 km. These jet streams result from the convergence of antitrades and air currents of the middle latitudes and are related to subtropical fronts, which are found only at the highest layers of the troposphere.

The major direction of air transport in all tropospheric jet streams is from west to east. Jet streams should therefore be considered an intensification of the general air transport from west to east in the upper troposphere and the lower stratosphere. Near the equator, at altitudes between 15 and 20 km, equatorial jet streams often arise in connection with the intertropical convergence zone. The predominant wind direction in these jet streams is easterly, corresponding to the direction of the general air transport at these latitudes. Stratospheric jet streams are also observed with axes at altitudes between 25 and 30 km; they are westerly at high latitudes during the winter and easterly at low latitudes during the summer.

Jet streams are significant components of the atmospheric circulation. Because of this and because jet streams are of practical importance to air transport, they were intensively studied on an empirical and theoretical basis in the 1950’s and 1960’s.

[′jet ‚strēm]
(aerospace engineering)
The stream of gas or fluid expelled by any reaction device, in particular the stream of combustion products expelled from a jet engine, rocket engine, or rocket motor.
(meteorology)
A relatively narrow, fast-moving wind current flanked by more slowly moving currents; observed principally in the zone of prevailing westerlies above the lower troposphere, and in most cases reaching maximum intensity with regard to speed and concentration near the troposphere.
McGraw-Hill Dictionary of Scientific & Technical Terms, 6E, Copyright © 2003 by The McGraw-Hill Companies, Inc. 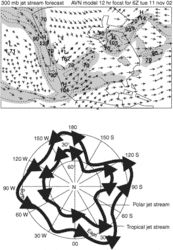 Principal jet streams in the Northern Hemisphere.
A narrow band of high-velocity wind in the upper troposphere or in the stratosphere. These westerly air currents in the form of a flattened, narrow core may be thousands of miles in length and a hundred or more miles in width and have one or more vertical thicknesses. The wind speeds in a jet stream are typically 100 to 200 knots (minimum 60 knots) but can reach as high as 300 knots in the core. The maximum winds usually are found at heights varying between 35,000 and 40,000 ft but jet streams of lesser magnitudes may be found at about 24,000 ft. There are two different jet streams in the troposphere—the subtropical and the polar. During winter, the subtropical jet streams are relatively consistent and continuous in position and in time, whereas polar jet streams are much more variable in location, continuity, speed, and elevation.
An Illustrated Dictionary of Aviation Copyright © 2005 by The McGraw-Hill Companies, Inc. All rights reserved

Feedback
Flashcards & Bookmarks ?
Please log in or register to use Flashcards and Bookmarks. You can also log in with
Flashcards ?
My bookmarks ?
+ Add current page to bookmarks
Mentioned in ?
References in periodicals archive ?
"The ripple then travels onwards to above the Atlantic Ocean, pushing the jet stream north of the UK.
Typhoon Krosa set to bring summer weather back to the North East; The tropical storm is raging over Japan and other parts of Asia but is set to make its way towards the UK
The jet stream is a fast flowing current of air which helps determine the weather.
Snow could be on horizon; HIGH GROUND COULD SEE SOME OF THE WHITE STUFF FALL TOWARDS THE END OF THE MONTH
The changeable outlook comes after an increased thermal gradient over North America, which has caused the jet stream to strengthen and drive turbulent Atlantic weather systems towards the UK.
Britain set to be battered by unsettled Atlantic weather blast cocktail; The weather system has sat well north to the country over the past few weeks, leading to plenty of warm, dry and settled conditions
They say: "Changes will be caused by the jet stream sweeping north allowing milder, more settled weather to take hold across Britain pushing up values for large parts of the nation."
Teessiders enjoy sunshine on last day of bank holiday weekend; Families have been basking in the glorious weather today at Albert Park
Thus, we've begun looking at ways to track, analyze and forecast locations of jet stream patterns to better pinpoint when conditions may favor severe storms.
How my research could extend weather warnings
Significant, sudden changes in global temperature leads to more frequent air pockets above the world's jet stream winds, thereby increasing cases of turbulences.
Unusual weather patterns giving passengers hard time to fly
According to Dutton's YouTube channel, the jet stream was briefly north of the UK, "giving some fine weather".
Summer is just about returning..
NASA data: The climate is warming, but the warmth is concentrated in the Arctic and not evenly distributed around the globe, making the jet stream wobbly
Scientists Are Floored By What's Happening In The Arctic Right Now
Ever heard of the jet stream? This is a narrow zone of very strong winds that extends for several thousand miles and lies about 30,000ft above the Earth.
What happened to our summer? As floods, cold temperatures and high winds make July 2015 feel more like autumn, weather forecaster Kirsty answers the question on every Scot's lips WASHOUT REASONS BEHIND THE MOST MISERABLE SEASON
And its a consequence of the stuck jet stream, according to Francis and Weather Underground meteorology director Jeff Masters, Daily Mail reported.
May has been a month of extreme weather around the world: Scientist
Riding along this polar jet stream like eddies in a flowing river are the smaller, temporary wind patterns that make up storms.
Rapid arctic warming bolsters summer heat waves: slowing jet stream spawns weaker continent-cooling storms in Northern Hemisphere