chrysanthemum (krĭsănˈthəməm), name for a large number of annual or perennial herbs of the genus Chrysanthemum of the family Asteraceae (aster family), some cultivated in Asia for at least 2,000 years. The chrysanthemum is the floral emblem of the imperial family of Japan; the highest officials are honored by orders of the chrysanthemum. The flower heads are mostly late blooming and of various shades of red, yellow, and white; they range from single daisylike to large rounded or shaggy heads. Chrysanthemums were introduced to England in the late 18th cent., and today innumerable named horticultural types exist. Most are varieties of C. morifolium, a species of indeterminate origin and no longer known in the wild form. Chrysanthemums rank with roses in commercial importance as cut flowers and pot and garden plants. The pyrethrum, feverfew, and daisy belong to the same genus. Pyrethrum is used as an insecticide and feverfew as an herbal remedy for migraine. Chrysanthemum is classified in the division Magnoliophyta, class Magnoliopsida, order Asterales, family Asteraceae.
The Columbia Electronic Encyclopedia™ Copyright © 2022, Columbia University Press. Licensed from Columbia University Press. All rights reserved. 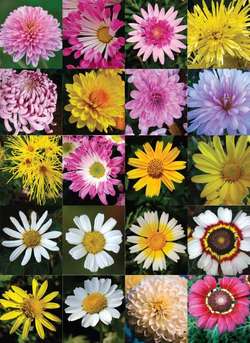 A wide variety of looks and beautiful colors in the Asteraceae family, which includes daisies. Tangy, slightly bitter, mums come in many colors ranging from red, white, yellow and orange to hot pink,. Flavors vary as much as the colors. Always remove the bitter flower base and use petals only. They should be blanched or steamed first and then add petals on a salad. Young leaves and stems of the Crown Daisy, are popular in Asian stir fries. Also use as seasoning.
Edible Plant Guide © 2012 Markus Rothkranz
The following article is from The Great Soviet Encyclopedia (1979). It might be outdated or ideologically biased.