Historians do not agree on the origin of the English jury. Although some authorities trace it to Anglo-Saxon or even more remote Germanic times, most believe that it was brought to England by the Normans. The first jurors were not triers of fact in legal disputes but were persons acquainted with the situation in question who spoke out of personal knowledge. Thus, in compiling the Domesday Book inquests of neighbors were convened to furnish information on property holdings.

In the enforcement of criminal justice the earliest function of the jury (mid-12th cent.) appears to have been the presentation of accusations, and it was only later that jurors were convened to answer on oath the question of guilt. These early jury trials, while supplanting the ordeal and other irrational procedures, were not themselves satisfactory, because they depended entirely on the unsupported oath of the jurors. A verdict could not be overturned except by attaint, that is, by summoning a second jury to give its sworn verdict on the question as to whether the first jury had committed perjury.

To the English and other peoples who have adopted the English common-law system, trial by jury became a cherished protection against the possibility of judicial and administrative tyranny. Among the abuses recited in the American Declaration of Independence is “depriving us in many cases, of the benefits of Trial by Jury.” The Sixth and Seventh Amendments to the U.S. Constitution, reflecting this concern, require a jury in federal trials, in criminal prosecutions, and in civil suits at common law where the damages sought exceed $20; the traditional exemption of cases in equity was left unchanged.

In most criminal cases the charge is first considered by a grand jury with 12 to 23 members. It hears witnesses against the accused, and if 12 jurors believe that there is sufficient evidence to prosecute, an indictment or the like is presented. The jury sitting at the trial proper is called a petit (or petty) jury from its smaller size (usually 12 members).

The selection of a trial jury is essentially alike in civil and in criminal cases. The venire, a panel of prospective jurors living in the district where the trial is to be held, is summoned for examination. Counsel for the parties may first challenge the array, that is, object that the venire as a whole was improperly chosen or is for some reason unfit. The challenges to the poll (the members of the venire taken individually) that follow are designed to secure as jurors unbiased persons without special knowledge of the matters in issue. Included are challenges for principal cause, i.e., some grounds such as relationship to a party that requires dismissal of a member of the venire; challenges to the favor, i.e., suspicion of unfitness on which the judge rules; and a limited number of peremptory challenges. Once selected, the jury (usually with several alternates) takes an oath to act fairly and without preconceptions. At the close of the evidence and after the summations of counsel the judge instructs the jury concerning the verdict. Outside the English-speaking countries there is generally less recourse to the jury and less care in the selection of jurors. 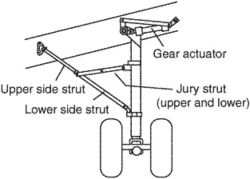 A small strut connecting the center of the main wing struts of a strut-braced monoplane to the wing spar. It prevents the main strut from vibrating.
An Illustrated Dictionary of Aviation Copyright © 2005 by The McGraw-Hill Companies, Inc. All rights reserved

Feedback
Flashcards & Bookmarks ?
Please log in or register to use Flashcards and Bookmarks. You can also log in with
Flashcards ?
My bookmarks ?
+ Add current page to bookmarks
Mentioned in ?
References in periodicals archive ?
III, [section] 2 (Bullitt & Feland 1881) ("No person shall be a competent juryman for the trial of criminal, penal, or civil cases in any court, unless he be a white citizen, at least twenty-one years of age, a housekeeper sober, temperate, discreet, and of good demeanor.").
Juries and race in the nineteenth century
(35.) See, e.g., Charles Edwards, The Juryman's Guide 65-66 (1831) (in New York jurors were subject to fine of $25 for each day they neglected to attend); Williams, supra note 13, at 84 (in South Carolina fines ranged from 50[cts.] to $20); Younger, supra note 11, at 75 (listing 10 states and noting that fines for failure to appear ranged from $3 to $50).
Juror delinquency in criminal trials in America, 1796-1996
Ideally, it should be a logical science, and he shows frustration that this is not possible in practice: `for verbal attack and pity and anger and such emotions of the soul do not relate to fact but are appeals to the juryman. As a result, if all trials were conducted as they are in some present-day states and especially in those well governed, they [the handbook writers] would have nothing to say' (1354a16-21).
Aristotle's knowledge of Athenian oratory
The testimony of the green grocer juryman, the only one to respond to the joke at the end of Buzfuz's introduction of Pickwick's letter, further supports such a reading.
The politics of family in the 'Pickwick Papers.'
369) as juryman, community member, and former father thereby wrongly implies that Fentry.
Trying emotions: unpredictable justice in Faulkner's "Smoke" and "Tomorrow." (Special Issue: William Faulkner)
"Our regime is composed of three elements: the magistrate, the juryman, and the private individual.
The martial republics of classical Greece
Once such alleged insights have got into the text books, it would be considered insulting for a layman, or a juryman, to cast doubt on them.
No cure for the infallible expert with God by proxy syndrome
Hawles's first reference to the case is also his most dramatic: When the juryman worries that a disobedient verdict might result in a fine that would "utterly ruin ones Family," the barrister declares, in the pamphlet's only typographical shift into a gothic, black-letter font, that "there is never a judge in England that can Fine or Imprison any Jury-man in such a Case." (83) In explicating the decision, which he quoted at length, Hawles briefly revisited the vicinage argument ("`To what end must Hundredors be of the Jury, whom the Law supposeth to have nearer knowledge of the Fact than those of the Vicinage in general?'" (84)), which he connected to the relation between law and fact: As the Judge can never direct what the Law is ...
Between local knowledge and national politics: debating rationales for jury nullification after Bushell's Case
One of them felt the sum was too high, but the other, who was the only black juryman, born in Jamaica, and part Asian perhaps had mixed motives, but among them was probably the feeling that no black victim would have had a similar dollar value put upon his life.
'Black Athena' and the American dilemma
Because the law did not, explain to him what hubris was, the juryman in a trial involving a charge of hubris had to judge the entire social context: the social and political status of litigant and defendant; their families, friends, and past behaviour; the location and timing of the incident and its ramifications for the whole of the demos.
What democracy meant to the Athenians
``Everything ended happily, however, when a juryman discovered that the problem had been caused by a 20p piece falling into the turn-up of his trousers.''
Historic day for Royal Mint staff
would witness a delightful but wicked flirtation between good-looking juryman and the volatile wife."(55) Unable to focus on the "legal harangue," women jurors would instead introduce frivolous conversation, emblematic of their domestic sphere, into the sober proceedings.
Clearing the smoke-filled room: women jurors and the disruption of an old-boys' network in Nineteenth-century America