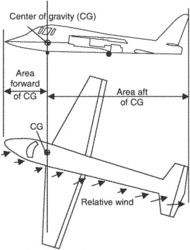 Depending upon the action of the relative wind on the side area of the airplane fuselage, in a slight slip the fuselage provides a broad area upon which the relative wind strikes, forcing the fuselage to become parallel to the wind. This is known as a keel effect. This effect aids in the lateral stability of the aircraft.
An Illustrated Dictionary of Aviation Copyright © 2005 by The McGraw-Hill Companies, Inc. All rights reserved

Feedback
Flashcards & Bookmarks ?
Please log in or register to use Flashcards and Bookmarks. You can also log in with
Flashcards ?
My bookmarks ?
+ Add current page to bookmarks
References in periodicals archive ?
Any kind of modest weighting on the hook shank adds a "keel effect" so lures don't roll over, but run straight and true.
Secret Weapon
Bob LeMay is credited with tying in multiple 1/8- to 3/4-inch strips of wire along, rather than around, the hook shank to create a "keel effect." He does this with Bendback streamers, and that weighted shank (which is then over-wrapped with either chenille or similar body materials) not only sinks the fly but encourages it to swim in the correct hook-up manner, in the same way that lead eyes are tied under the shank of bonefish flies.
Get down under: ways to sink your fly
Encyclopedia browser ?
Full browser ?
CITE
Site: Follow: Share:
Open / Close