[′kin·ə‚skōp]
(electronics)
picture tube
McGraw-Hill Dictionary of Scientific & Technical Terms, 6E, Copyright © 2003 by The McGraw-Hill Companies, Inc.
The following article is from The Great Soviet Encyclopedia (1979). It might be outdated or ideologically biased.

television picture tube, a cathode ray tube used to reproduce television images. The kinescope is used for viewing black-and-white or color images either directly or by projecting the image onto a large screen, for photographing images on photographic or motion-picture film, as a light source, and for resolving an image into its elements by the scanning-beam method.

In the kinescope, the current intensity of an electron beam from an electron gun is changed (modulated) in accordance with the amplitude variations of signals received by a control electrode, or modulator (see Figures 1 and 2). Under the influence of an accelerating voltage applied to the anode and because of the effect of a deflection system, the modulated beam illuminates (with variable brightness) line after line of an electroluminescent screen, thus reproducing frame by frame the image being transmitted. The screen itself is made of a powderlike luminophor (phosphor) or of a mixture of such substances deposited on the bottom inside surface of the bulbous end of the kinescope. Luminescence appears wherever the electron beam is incident upon the screen, the color of this luminescence depending on the composition of the luminophor. To avoid the image spread of moving objects, luminophores are chosen for brevity of afterglow (less than 0.1 sec). In most kinescopes the inner surface of the screen is covered with a thin aluminum film (about 0.5–1.0 microns) that is transparent to electrons. Reflecting the light generated by the bombardment of the screen by electrons, this film increases the light output by 30–50 percent. The film also protects the phosphor at the center of the screen from destruction by negative-ion flow (that is, from the formation of “ion spot”). In the absence of an aluminum layer, an “ion trap” is used. 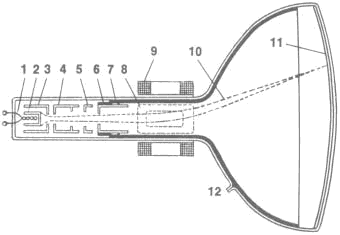 The basic types of kinescopes manufactured in the USSR for the direct viewing of black-and-white images (see Figure 1) have a rectangular screen with diagonal dimensions of 6, 11, 16, and 23 cm for portable transistorized television receivers and 35, 43, 47, 59, 61, 65, and 67 cm for table models. The beam is usually focused by an electrostatic system, and it is usually deflected by a magnetic system. The deflection angles of the beam are equal to 70°, 90°, or 110°. Near-white screen luminescence is attained by using a powderlike mixture of two phosphors that yield complementary colors when luminescent. Silver-activated zinc sulfide (blue luminescence) and silver- or copper-activated zinccadmium sulfide (yellow luminescence) are usually used. The kinescope’s anode voltage ranges from 12 to 20 kilovolts, and its beam current ranges from 30 to 500 microamperes. In kinescopes with diagonal screen dimensions up to 23 cm the luminance ranges from 300 to 40 nits; for diagonal dimensions from 35 to 67 cm, it ranges from 50 to 150 nits. 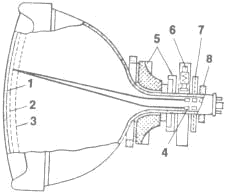 The operation of a kinescope for the direct viewing of color images is based on the ability of the human eye to perceive color as a result of the mixing, in particular proportions, of the three primary colors (red, green, and blue). In shadow-mask color kinescopes (see Figure 2), which are the type most widely used both in the USSR and abroad, the screen is constructed like a mosaic (see Figure 3). It consists of about 1.5 million luminophoric points, or “dots,” luminescent in three colors when acted upon by three electron beams: red (when made, for example, from manganese-activated zinc phosphate), green (if made, for example, from silver-activated zinc selenide), and blue (if made, for example, from silver-activated zinc sulfide).

The luminophoric points, or phosphor dots, of these three types form groups that are repeated systematically along the lines of the mosaic. Each such group corresponds dimensionally to an element in the televised image. A thin metal plate is located somewhere between the electron gun and the screen. This plate, the shadow mask, has about 500,000 apertures with a diameter of a fraction of a millimeter. Three electron beams from three guns pass simultaneously through any of these apertures. One of the beams always hits a phosphor dot luminescent in red, the second beam always hitting a dot luminescent in green, and the third, a dot luminescent in blue. The image is scanned by a common magnetic deflection system. The simultaneous convergence of all three beams in any one aperture is brought about by three separate supplementary deflection systems. A color-purifying magnet is used to prevent the appearance of flare spots at “foreign” phosphors. By a turn of this magnet, the electron beam is directed toward one of its “own” phosphors. The beams are modulated by corresponding television signals carrying information on the appropriate chrominance and brightness of the various elements of the image being transmitted. Black-and-white images can be received with a color kinescope.

Shadow-mask kinescopes manufactured in the USSR have rectangular aluminized screens with diagonal dimensions of 40 and 59 cm; their anode voltage ranges from 20 to 25 kV. Their screen brightness (for white) is 60 nits (at a total beam current intensity of 450–1,250 µ A). 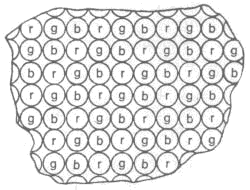 However, shadow-mask kinescopes present quite a few complexities in manufacturing and operation. Current (1972) developmental work in the Soviet Union and abroad is aimed at producing simpler and more reliable single-gun color kinescopes with a lined screen and a focusing grid (the chromatron).

The screen of the chromatron consists of vertical bands of phosphors of red, blue, and green luminescence. The focusing-grid wires are stretched opposite and parallel to these bands. Because of the potential difference between the grid and the screen, cylindrical electron lenses are formed between the wires. These lenses have a supplementary focusing effect on the electron beam, which is directed toward the bands of green phosphors. Video signals containing information on the red, green, and blue components of the image are fed by turns to the modulating electrode. This occurs simultaneously with the commutation of the deflecting voltage on the grid. As a result, all three primary colors are obtained by turn. Because of the time lag in human visual perception, these colors merge in a single colored image. Among the advantages of the chromatron are the single gun and the use of a simple magnetic deflection system and the absence of supplementary beam-focusing and color-purifying magnets.

Unlike the chromatron, a color kinescope made in Japan (the trinitron) has three guns and transmits the three colors simultaneously. This design affords increased image brightness and improves the quality of color reproduction as compared to threegun shadow-mask kinescopes, since it makes better use of the beam currents.