kiva (kēˈvə), large, underground ceremonial chamber, peculiar to the ancient and modern Pueblo. The modern kiva probably evolved from the slab houses (i.e., storage pits and dwellings that were partly underground and lined with stone slabs set on edge) of their cultural ancestors, the Basket Makers. A modern kiva is either a rectangular or a circular structure, with a timbered roof. It is entered through a hatchway by means of a ladder. The floor is made of smooth sandstone slabs, and the walls of fine masonry. There is a dais at one end, a fire pit in the center, and an opening in the floor at the other end. This orifice represents the entrance to the lower world and the place of emergence through which life came to this world. The walls also have a symbolic significance and are decorated with mythological figures. Women are traditionally restricted from entering a kiva. Men use the kiva for secret ceremonies, as a lounging place, and as a workshop where weaving is done.
The Columbia Electronic Encyclopedia™ Copyright © 2022, Columbia University Press. Licensed from Columbia University Press. All rights reserved. 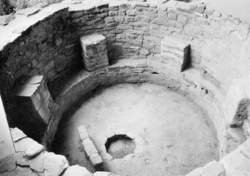 Five thousand years after the last glacier melted enough to allow people to migrate by land to the Americas, a great civilization began to evolve complex cultural patterns in the Four Corners region of the American southwest.

By 1000 BCE the Anasazi people were beginning a settled, agricultural way of life that would develop for centuries. At the height of their golden age, 1100-1300 CE, settlements in what are now called Pueblo Bonito in Chaco Canyon, New Mexico, and Cliff Palace in Mesa Verde, Colorado, were cities housing up to seven thousand residents.

In the Navajo language, Anasazi means "enemy ancestors." Some translate it as "ancient ones" or "those who came before." The word describes a people who lived long ago and left a complex legacy, both mystical and material. A severe drought from 1276-1299 left their fields of corn high and dry, their irrigation ditches above water level. It is easy to speculate that a lack of firewood and heavy competition for resources drove the people to disband and drift away, either evolving different desert cultures or simply disappearing into legend. By 1300, all of their great settlements were deserted.

What they left behind, however, were monuments to their culture and rich religious mythology.

The Anasazi people believed they had entered this world through a hole in the ground from a world that had come before. This creation myth was reenacted every time they emerged from their kivas, underground chambers entered by ladder through a single entrance at the top. Although we don't know exactly what kind of religious rituals were enacted, the kiva was a central place of worship and initiation.

In 1934, when excavation began at the Kuaua Kiva, a fourteenth-century pueblo in New Mexico, murals were discovered on walls that had been replastered up to eighty times. Seventeen layers contained religious scenes immediately recognized by modern Navajos.

Clearly, the very architecture of the kiva represented a strong oral tradition that had been passed on for thousands of years.

Michael and Kathleen Gear, in their "First North Americans" series of novels, have attempted to harmonize modern archaeological thought with the ancient creation myth, speculating that the religion of the kiva did, indeed, represent historical reality.

When the Laurentide and Cordilleran ice sheets separated, opening a passageway south from the quickly disappearing Siberian land bridge, it is entirely possible that the first passageways to melt would have been underground, seasonal tunnels left by melting ice forming rivers under the glacier. If such a passage had been discovered and utilized by the first Americans, it could certainly have been remembered as an event of epic proportions. Stories would have been told for generations about a migration into a new world, where people encountered animals that had no fear of these new predators appearing suddenly through a hole in the ground.

This is, of course, speculation. But it is tempting to think that a religious tradition as strong as that of the kiva can be located and demonstrated in history.

In some Indian villages of the American Southwest, an assembly room (often partly or wholly underground) which has a packed earth floor, a firepit at its center, and a flat roof supported by hewn logs that are covered by small branches, matting, and a layer of earth. The room is usually entered through a roof hatchway by means of a ladder whose poles extend well above the flat rooftop.
McGraw-Hill Dictionary of Architecture and Construction. Copyright © 2003 by McGraw-Hill Companies, Inc.

Feedback
Flashcards & Bookmarks ?
Please log in or register to use Flashcards and Bookmarks. You can also log in with
Flashcards ?
My bookmarks ?
+ Add current page to bookmarks
Mentioned in ?
References in periodicals archive ?
In the two years since Kiva Rochester began its loan program here, nearly 60 entrepreneurs have borrowed roughly $300,000, Warren said.
Kiva assists local businesses get loans
' MetLife was founded on a simple and powerful insight that everyone needs access to the right financial tools to pursue more from life,' said Premal Shah, Kiva's president and cofounder.
MetLife Foundation partners with Kiva to support entrepreneurs and build financial inclusion
Summary: The international nonprofit Kiva is crowdfunding microloans to help Syrian refugees and their host communities start businesses and foster financial independence
Rebuilding the lives of refugees
River Road, by Kiva Ventures LLC of San Antonio, Texas, to Ellen Quinlan of West Palm Beach, Fla.
A series of real state transactions were recently announced Mike Reed of Stebbins Commercial Properties
A majority of the state's microfinance activity has occurred through a unique platform called Kiva Zip.
Microfinance Potential in Alaska
Peter Wurman is the technical cofounder of Kiva Systems, Inc., which was acquired by Amazon.com in 2012 and is now known as Amazon Robotics.
Amazon Picking Challenge 2015
The land is between The Kiva grocery store and the Eugene Public Library.
Cleanup starts at McAyeal's site
"They wanted to create a shared asset/shared infrastructure fulfillment platform for piece picking, and they wanted a solution that allowed them to start small and scale up as the business grew." Quiet matched their desires with Kiva Systems' mobile e-fulfillment robots, and the game changed--and their business took off.
Robotics: People and process are fundamental
People who attend are asked to donate PS2 at the door which will go to micro-finance charity Kiva, which has loaned more than 4,000 US dollars in recent years to individuals who lack the necessary funds or knowledge to expand their own small businesses.
Students in boost for businesses
The Finland-funded KiVa antibullying programme is proven to reduce bullying in schools there - and early indications suggest its effectiveness in Welsh schools as well.
BEATING BULLIES THE
They are raising 1st round funds through the Kiva Zip Micro-Loan Platform to develop the animated series MyKids Unite[c] and #HumanityRising Arts Outreach Projects.
Oneness Through Art, L3C Sets to Raise $10,000 Through Crowdfunding Platform Kiva-Zip