(ăp`tərĭks), common name for the smallest member of an order of primitive flightless birds related to the ostrichostrich,
common name for a large flightless bird (Struthio camelus) of Africa and parts of SW Asia, allied to the rhea, the emu and the extinct moa. It is the largest of living birds; some males reach a height of 8 ft (244 cm) and weigh from 200 to 300 lb (90–135
..... Click the link for more information. , the emuemu
or emeu
, common name for a large, flightless bird of Australia, related to the cassowary and the ostrich. There is only one living species, Dromaius novaehollandiae. It is 5 to 6 ft (150–180 cm) tall and a very swift runner.
..... Click the link for more information. , and the cassowarycassowary
, common name for a flightless, swift-running, pugnacious forest bird of Australia and the Malay Archipelago, smaller than the ostrich and emu. The plumage is dark and glossy and the head and neck unfeathered, wattled, and brilliantly colored, with variations in the
..... Click the link for more information. . The kiwi, named by the Maoris for its shrill, piping call, is most closely related to the extinct moamoa
[Maori], common name for an extinct flightless bird of New Zealand related to the kiwi, the emu, the cassowary, and the ostrich. The various species ranged in size from that of a turkey to the 10-ft (3-m) Dinornis giganteus.
..... Click the link for more information. . It is the size of a large chicken and has short, stout legs and coarse, dark plumage that hides the rudimentary wings. It lacks wing and tail plumes and walks with a rolling gait. It is the only bird whose nostrils open at the tip of the bill, which is 6 in. (15 cm) long, slender, and curved. Kiwis hide during the day and forage at night for grubs and worms. Their eyesight is poor; the long, hairy bristles at the base of the bill are believed to have a tactile function which is thought to supplement their keen sense of smell in hunting. Kiwis nest in underground burrows, the male performing the incubational duties. The one or two chalky white eggs are 5 in. (12.5 cm) long, weigh almost 1 lb. (0.5 kg), and take from 75 to 80 days to hatch. The three living species of kiwi, genus Apteryx, have dwindled with the advance of agriculture and the introduction of predators such as cats, weasels, and stoats, but they are now rigidly protected by law. The kiwi is the symbol of New Zealand and appears on the seal, coins, stamps, and on various products of its homeland; overseas New Zealand troops are popularly called kiwis. Kiwis are classified in the phylum ChordataChordata
, phylum of animals having a notochord, or dorsal stiffening rod, as the chief internal skeletal support at some stage of their development. Most chordates are vertebrates (animals with backbones), but the phylum also includes some small marine invertebrate animals.
..... Click the link for more information. , subphylum Vertebrata, class Aves, order Struthioniformes, family Apterygidae.
The Columbia Electronic Encyclopedia™ Copyright © 2013, Columbia University Press. Licensed from Columbia University Press. All rights reserved. www.cc.columbia.edu/cu/cup/ 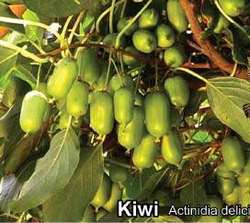 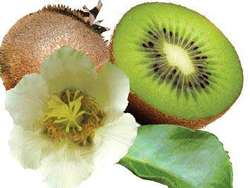 Look like fuzzy brown hairy eggs that help fight cancer. Very high levels of vitamin A, C, E, K. More vitamin C than citrus and as much potassium as bananas. Raw kiwi fruit is rich in the protein-dissolving enzyme actinidin. The oil in the seeds contains on average 62% alphalinolenic acid, an omega-3 fatty acid. Yes you can eat the hairy skin, but make sure its organic. Helps respiratory conditions like cough, asthma. High antioxidant levels help eye conditions like macular degeneration. High in fiber so it helps diabetes, colon, heart, lowers cholesterol, helps remove toxins and heavy metals. Blood thinner, good for blood clots. Edible Landscaping has types of kiwis that can handle temperatures from desert heat to 35 below zero (!) and produces thousands of fruit per year on a vigorously growing vine base.
Edible Plant Guide © 2012 Markus Rothkranz
The following article is from The Great Soviet Encyclopedia (1979). It might be outdated or ideologically biased.

(also apteryx), a bird of the order Apterygiformes. Its wings are not fully developed, and there is no tail. The legs are strong, with sharp claws. The kiwi has soft plumage which covers the entire body evenly. The bill is long and flexible, with nostrils at its very tip. The eyes are small, but the senses of hearing and smell are well developed. The bird weighs 1.4–4.0 kg. There are three species, which are found in New Zealand. The largest is the brown kiwi (Apteryx australis), which inhabits both islands. The great spotted kiwi (A. haasti) and the little spotted kiwi (A. oweni) are found only on South Island. Kiwis are nocturnal birds that hide in humid evergreen forests. The brown kiwi lays one or two eggs, each weighing approximately 450 g, or one-eighth of the bird’s weight, in a burrow or under the roots of a tree. The male sits on the egg 75–77 days. Six days after hatching, the nestlings begin to feed independently. Kiwis feed on worms, insects, and fallen berries. The kiwi population has declined significantly. Its range has been reduced as a result of the introduction of predators to the island, such as cats, dogs, and weasels. Kiwis are protected by the government.

Feedback
Flashcards & Bookmarks ?
Please log in or register to use Flashcards and Bookmarks. You can also log in with
Flashcards ?
My bookmarks ?
+ Add current page to bookmarks
Mentioned in ?
References in periodicals archive ?
Taylor and Daryl Mitchell stitched a partnership of 26 runs, but as soon as Kiwis started to get ahead in the match, Hasaranga sent Taylor (48) back to the pavilion.
Ross Taylor shines as Kiwis defeat Sri Lanka in first T20I
The Kiwis lost Rapana to an arm injury with 10 minutes to go before England came up with the aforementioned a classic Makinson moment.
Battling England take series win
The family bought additional three-acre land in the neighborhood to plant more kiwi plants.
YouTube helps farmer in Bhutan to manage kiwi farm
"I also went out to New Zealand and did a film for Kiwis for Kiwi, who take eggs from the wild and put them into captivity to hatch.
Letkids gowild; TV presenter Michaela Strachan on getting next generation off their screens and into natureEDITED BY SALLY MCLEANChris and I are passionate about reconnecting kids with wildlife.. but it's toughTV's Michaela says her generation must get youngsters interested in wildlife.. or consequences could be dire
Styles is slated to (https://twitter.com/Harry_Styles/status/926436045817704448) release the music video version of "Kiwi" on Nov.
Supermarket Bans Kiwi Purchases After Harry Styles Is Pelted With Them
A spokesman said: "Kiwi is a very loving affectionate boy with his friends, but is also a very worried dog who prefers not to interact with strangers, especially if there is a lot going on.
I Wanna be your DOG! LONELY KIWI AND FLORA ARE LOOKING FOR LOVING HOMES
Kiwi Energy is also offering its new and present customers who decide to install a system, an Ecogold credit that can be used towards any participating brand in the Ecogold Loyalty Plan.
Kiwi Energy collaborates with Safe Streets USA
* Serve your friends a refreshing fruit drink made with kiwi and melon.
Hello Kiwi
In the very next over, Kate Perkins fell for two as the Kiwi team kept on losing wickets.
WI WOMEN IN FIRST FINAL
INGREDIENTS: 1ltr Princes Apple Juice, chilled Ice cubes 8 strawberries, halved 1 kiwi fruit, peeled and sliced A few mint sprigs 300ml sparkling water or lemonade HOW TO MAKE IT 1.
cook with the kids
But an Almondbury woman is celebrating her best ever crop - of Kiwi fruit.
Celia celebrates best ever crop of Kiwi fruit
Kiwi's vibrant green flesh with a dash of tropical flair has been coveted since it was discovered in its native China.
The quintessential Kiwi