rapid slipping of a mass of earth or rockrock,
aggregation of solid matter composed of one or more of the minerals forming the earth's crust. The scientific study of rocks is called petrology. Rocks are commonly divided, according to their origin, into three major classes—igneous, sedimentary, and metamorphic.
..... Click the link for more information.  from a higher elevation to a lower level under the influence of gravity and water lubrication. More specifically, rockslides are the rapid downhill movement of large masses of rock with little or no hydraulic flow, similar to an avalancheavalanche,
rapidly descending large mass of snow, ice, soil, rock, or mixtures of these materials, sliding or falling in response to the force of gravity. Avalanches, which are natural forms of erosion and often seasonal, are usually classified by their content such as a debris
..... Click the link for more information. . Water-saturated soil or clay on a slope may slide downhill over a period of several hours. Earthflows of this type are usually not serious threats to life because of their slow movement, yet they can cause blockage of roads and do extensive damage to property. Mudflows are more spectacular streams of mud that pour down canyons in mountainous regions during major rainstorms where there is little vegetation to protect hillsides from erosion. The runoff from the storm and mud becomes a thin slurry that funnels down the canyons until it thickens and stops. Earthquakesearthquake,
trembling or shaking movement of the earth's surface. Most earthquakes are minor tremors. Larger earthquakes usually begin with slight tremors but rapidly take the form of one or more violent shocks, and end in vibrations of gradually diminishing force called
..... Click the link for more information.  also may cause landslides by shaking unconsolidated or weathered material from slopes. Rockslides triggered by an earthquake in Montana in 1959 caused an entire mountainside to slide into the Madison River gorge, killing 27 people in its path, damming the gorge, and forming a new lake. Humans have triggered a number of tragic landslides that have caused great damage and loss of life. In the Los Angeles area of California, extensive real estate development carried out on hillsides has resulted in widespread mudflows after winter rains have saturated the over-steepened embankments of soil. In some areas, slow-moving earthflows have been initiated by the lubrication of certain types of underlying clays by septic tank effluent. Submarine slides, or a sliding mix of seawater and sediment, are called turbidity currents. Undersea landslides can travel several hundred miles across very gradual slopes, riding on a thin film of water that reduces friction.
The Columbia Electronic Encyclopedia™ Copyright © 2013, Columbia University Press. Licensed from Columbia University Press. All rights reserved. www.cc.columbia.edu/cu/cup/
The following article is from The Great Soviet Encyclopedia (1979). It might be outdated or ideologically biased.

the sliding movement of rock masses down a slope under the action of the force of gravity. Landslides occur on particular segments of an incline or slope as a result of unbalance of the rocks caused by an increase in the steepness of the slope through erosion by water, weakening of the rock by weathering or supersaturation by precipitation and groundwater, seismic shocks, or construction and economic activity carried out without consideration for the geological conditions of the terrain (breaking up slopes by road excavation, excessive watering of gardens and orchards on slopes, and so on).

Landslides most often occur on slopes composed of alternating impervious (clayey) and water-bearing rock (for example, sand and gravel or fissured limestone). The development of landslides is also promoted by types of bedding in which layers are inclined in the direction of the slope or are crossed by fissures going in the same direction. Landslides assume the form of a flow in strongly moistened clayey rock. A landslide is often semicircular in cross section (see Figure 1), forming a depression in the slope that is called the landslide cirque. 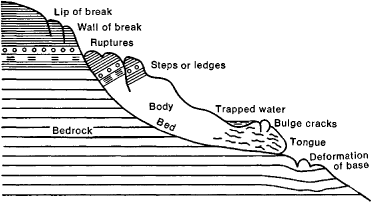 Figure 1. Cross section of a landslide

Landslides cause great damage to farmland, industrial enterprises, and populated areas. Reinforcement works and drainage structures are constructed to combat landslides, piles are driven to secure the slopes, and vegetation is planted.

[′lan‚slīd]
(geology)
The perceptible downward sliding or falling of a relatively dry mass of earth, rock, or combination of the two under the influence of gravity. Also known as landslip.
McGraw-Hill Dictionary of Scientific & Technical Terms, 6E, Copyright © 2003 by The McGraw-Hill Companies, Inc.

1.
a. the sliding of a large mass of rock material, soil, etc., down the side of a mountain or cliff
b. the material dislodged in this way
2.
a. an overwhelming electoral victory
b. (as modifier): a landslide win
Collins Discovery Encyclopedia, 1st edition © HarperCollins Publishers 2005

Feedback
Flashcards & Bookmarks ?
Please log in or register to use Flashcards and Bookmarks. You can also log in with
Flashcards ?
My bookmarks ?
+ Add current page to bookmarks
Mentioned in ?
References in periodicals archive ?
After the application of Cosi-Corr, developed and modified for landslide identification by Saba et al, (2017), the systematic masking was performed to eliminate the high displacement values caused by manmade (construction etc.) and natural activities (erosion, sediment deposition on both sides of streams, deformation due to seismic effects etc.).
Application of sub-pixel-based technique "orthorectification of optically sensed images and its correlation" for co-seismic landslide detection and its accuracy modification through the integration of various masks
"Monitoring is also continuing in the landslide area of Bukhtinskaya Street: there were no cracks in the lighthouses, however, relative activity was recorded in the dynamics of the landslide," he said.
Activity registered in landslide zones of Baku
At least 72 have been confirmed dead in the September 20 landslide in Naga City while 11 are still marked missing.
Woman who condemned Naga quarrying safe, in hiding
Landslide processes occur on the steepest slopes of the valley, especially in the vicinity of the town of Kandava (Veinbergs 1975).
Landslide inventory in the Abava spillway valley, Latvia
"Deforestation, blasting, tunnelling, encroachments on drainage systems, including rivers and streams, on the hill slides, etc definitely increase the landslide potential," Himanshu Thakkar of the South Asia Network on Dams, Rivers and People (SANDRP), said.
Most landslides in Manipur caused by human interventions, say experts
In addition to finding where landslides are more likely, our research also predicts that some areas of California are less susceptible to storm-driven landslides solely because high intensity rainfall is unlikely.
EXCEEDING PRECIPITATION THRESHOLDS CONDUCIVE TO SHALLOW LANDSLIDES IN CALIFORNIA
Close to 50 people died in a similar landslide in May 2016 after heavy rains caused flooding and landslides.
Landslide kills 23 in Ethiopia
'KeRRA would like to issue an alert on the Kanjama Kiria-ini Kangema Road where a section has collapsed due to a landslide, therefore, rendering it impassable.
Landslide cuts off Kanjama-Kangema road
Intense geomorphologic and geological studies performed recently in Lower Silesia have revealed the presence of numerous landslide forms in some hill ranges of the Central and Western Sudetes.
MONITORING OF ANTHROPOGENIC LANDSLIDE ACTIVITY WITH COMBINED UAV AND LIDAR-DERIVED DEMS - A CASE STUDY OF THE CZERWONY WAWOZ LANDSLIDE (SW POLAND, WESTERN SUDETES)
Chances are it will remain closed for a longer period of time as more cracks are showing, indicating the possibility of a landslide.
Landslide threat forces DPWH to close major road to Mindanao
The Zhenggang landslide (E98[degrees]55'-98[degrees]90', N28[degrees]30'-28[degrees]40') is a huge ancient landslide located at the right bank of the downstream of the Gushui hydropower station in the southeastern Tibetan Plateau of China (Figure 1) and has a serious impact on the safety of diversion tunnels and flood discharge tunnels of the hydropower station.
Stability and Failure Mechanism Analyses of the Zhenggang Landslide in Southwestern China