A system of underground tile or pipes arranged in trenches filled with gravel on the downhill side of a septic tank. The waste is discharged into the tile bed and seeps into the soil along the lengths of the feeders.
Illustrated Dictionary of Architecture Copyright © 2012, 2002, 1998 by The McGraw-Hill Companies, Inc. All rights reserved 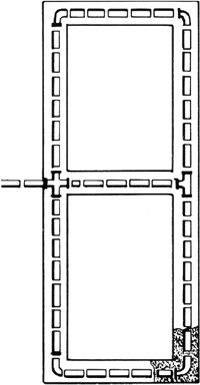 absorption field composed of absorption trenches Extent of coarse aggregate indicated by shaded area
A system of trenches containing coarse aggregate and distribution pipes through which septic-tank effluent may seep into the surrounding soil.
McGraw-Hill Dictionary of Architecture and Construction. Copyright © 2003 by McGraw-Hill Companies, Inc.

Feedback
Flashcards & Bookmarks ?
Please log in or register to use Flashcards and Bookmarks. You can also log in with
Flashcards ?
My bookmarks ?
+ Add current page to bookmarks
Mentioned in ?
References in periodicals archive ?
What we do is recycle our wastes into our own leaching field, which produces fertilizer.
Sewer-line 'violators' chide DENR for releasing 'faulty' list
"If you have sewers, but the residents can't connect, they will need larger lots to support the leaching field."
Build-out analysis will help; Town formulates water, sewer rules
Traditional leaching field systems are prone to failure due to soils with low, or very high, permeability.
Constructing wetlands to replace rural septic systems. (Focus on Biological Engineering)
The upper plume moved along near the surface of the water table and contained the highest nitrate concentration of the three plumes; at nearly 3000 [micro]M, it was similar to literature values [8] for septic effluent that has just left the leaching field. The nitrate, B, and K concentrations in this plume differed considerably from those of the other plumes (Fig.
Fate of Anthropogenic Nitrogen in a Nearshore Cape Cod Aquifer
The flow is measured and then goes to a leaching field through a dosing chamber.
Ashfield, Massachusetts, showcases "green" wastewater treatment plant