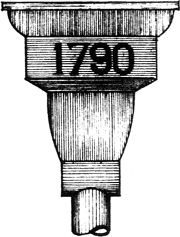 leader head
An enlargement or catch basin to receive rainwater from the gutter at the top of a leader.
McGraw-Hill Dictionary of Architecture and Construction. Copyright © 2003 by McGraw-Hill Companies, Inc.

Feedback
Flashcards & Bookmarks ?
Please log in or register to use Flashcards and Bookmarks. You can also log in with
Flashcards ?
My bookmarks ?
+ Add current page to bookmarks
Mentioned in ?
References in periodicals archive ?
David met Shingo Ohgami, the eighth Dan and worldwide leader head of the Wado Kai organisation and Sweden's chief instructor, in Aldershot in May.
David trains with karate leader; Martial arts
Possible leader Head Iton Eoin would benefit from trouble in behind, while Newmarket Flyaway is strong but may be looking for the same gaps as the selection.
Sawpit can be a sensation in Nottingham decider
Labour strategists have long believed he will be able to beat Mr Cameron when he is allowed to tackle the Tory leader head on.
Cameron poll lead is rocked by Brown
Colin Redden's dog moved through the field after a modest start and passing long-time leader Head Iton Jason on the run-in, going on to beat staying on Rubio by a length.
Fletch sets the standard in Queen Mother openers
Reports say that there are three aspirants for the post of the vice-president, SSPM leader headed Costello Garang, Gabriel Changson and Lam Akol.
SSOA dismisses reports that post of South Sudan vice-president behind divisions
Defending his appointment, Shahbaz said, "It does not matter as to who moved forward and who moved backwards rather it's been a parliamentary tradition that the opposition leader heads the PAC."
IHC reserves verdict on Shahbaz's appointment as PAC chairman
Rome, Safar 26, 1440, Nov 4, 2018, SPA -- Storms lashing Sicily have killed at least 12 people with torrential floods, Italian authorities said as the country's leader headed Sunday to the stricken Mediterranean island.
Storms, Floods in Sicily Kill at Least 12 People; 2 Missing
The Israeli leader heads a coalition with only a one-seat majority in parliament, making him especially vulnerable to the demands of religious nationalists in his cabinet regarding settlements, which much of the international community opposes.
Netanyahu: Israel a[euro]Supports Settlement at Any Time' After Hebron Incident
World No.1 Tiger Woods struggled to a third round 73 at Oak Hill to finish four over par, 13 shots behind Jason Dufner just as the halfway leader headed to the first tee.
Phil and Tiger off the pace
The Haqqani leader headed rebel operations in Khost and Paktia provinces, besides organising the movement of fighters from Pakistan to Afghanistan, a statement from the ISAF media office said of Monday's offensive.
Several Haqqani fighters killed in Paktia: ISAF