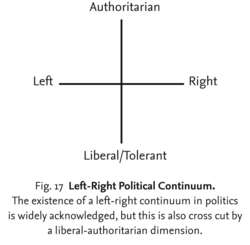 Fig. 17 Left-Right Political Continuum. The existence of a left-right continuum in politics is widely acknowledged, but this is also cross cut by a liberal-authoritarian dimension.

the division between radical or ‘left-wing’ POLITICAL PARTIES and orientations on the one hand, and conservative or ‘right-wing’ political parties and orientations on the other, originally so-called because of the arrangement of seating in the two sides of the French National Assembly. Subsequently the concept has persisted as a general term referring to the spectrum of political orientations, despite the obvious oversimplifications involved in any assumption that political issues and political parties can be arranged on a single continuum. One reason why confining political analysis merely to a left-right division is an oversimplification is that other dimensions, such as the liberal-authoritarian dimension, cross cut the left-right dimension. See Fig. 17. See also AUTHORITARIANISM, POLITICAL ATTITUDES.
Collins Dictionary of Sociology, 3rd ed. © HarperCollins Publishers 2000

Feedback
Flashcards & Bookmarks ?
Please log in or register to use Flashcards and Bookmarks. You can also log in with
Flashcards ?
My bookmarks ?
+ Add current page to bookmarks
Mentioned in ?
References in periodicals archive ?
The MP, a Catholic, holds views so traditional that they no longer can be considered part of the normal left-right continuum of British politics.
Another fine mess in Brexit saga
In August, the Social Market Foundation and Opinium asked voters to place themselves on a left-right continuum and also to do the same for a range of politicians.
UK Labour Party stands up for irrelevance
So if libertarians have affinity for Burke and Paine, then where are we on the left-right continuum? The middle?
Much of the real action again lies well off the one-dimensional left-right continuum.
The Great Debate: Edmund Burke, Thomas Paine, and the Birth of Right and Left
The left-right continuum is generally understood to possess three major dimensions (partisan, social class origins, and values).
Laponce, Left and Right: The Topography of Political Perceptions (Toronto, ON: University of Toronto Press, 1981); Rene Remond, Les Droites en France (Paris: Aubier-Montaigne, 1982); Asher Arian and Michal Shamir, "The Primarily Political Functions of the Left-Right Continuum," Comparative Politics 15, no.
Global governance and development ideology: the United Nations and the World Bank on the left-right spectrum
The left-right continuum retains a certain validity in the analytical process.
A Welsh Parliament; & COMMENT DEBATE YOUR LETTERS TO THE NATIONAL NEWSPAPER OF WALES
Voters perceived the two major parties in similar positions on the left-right continuum, and both were located to the right of the average Korean.
By asking voters to locate themselves and the major parties along the left-right continuum, we can describe the structure of the party system as perceived by the public.
The patterns of party polarization in East Asia
In the Federal Republic of Germany, where findings are available from 1976 to the present, as well as in all other countries in which the left-right scale was ascertained in 1981 and 1990, the great majority of respondents were able to place themselves at a specific point on the left-right continuum with great confidence.
A SHIFT FROM THE RIGHT TO THE LEFT AS AN INDICATOR OF VALUE CHANGE: A BATTLE FOR THE CLIMATE OF OPINION
The survey incorporated the Social Values Inventory, questions on self-interest and voting, and questions on identification with the left-right continuum.
The value balance model of political evaluations
This helps to explain why many people's political beliefs fall on a simple left-right continuum, rather than in more complex combinations.
The virtue of contradicting ourselves