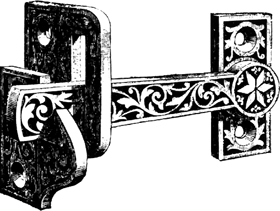 lift latch
A type of door latch which fastens a door by means of a pivoted bar that engages a hook on the doorjamb; a lever which lifts the pivoted bar is used to unfasten the door. Also see Norfolk latch, Suffolk latch, thumb latch.
McGraw-Hill Dictionary of Architecture and Construction. Copyright © 2003 by McGraw-Hill Companies, Inc.