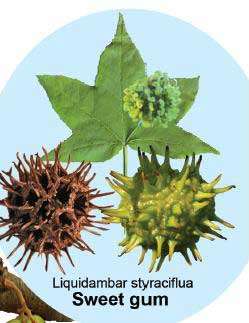 Tree up to 120 ft (40m) with very pointy-looking maple-type leaves that smell like pine when rubbed. Fruits are strange spiky balls (not edible). Bark is the part you want- it has a resinous gum in it’s cracks, and is chewed like chewing gum (similar to pine resin) Contains Shikimic acid, which stops flu viruses from reproducing- highest levels in infertile seeds (the yellow ones without wings). B-vitamins, colds, throat, bowel/colon, diarrhea, hemorrhoids, ringworm. Expectorant (helps clear mucus), anti-bacterial, anti-inflammatory. Inner bark and resin are used. If no resin is seen, cut to the inner bark and let sap run out and harden. The leaves have been used also, but are high in tannins. Best to soak several times or steam them to help remove tannins.
Edible Plant Guide © 2012 Markus Rothkranz
The following article is from The Great Soviet Encyclopedia (1979). It might be outdated or ideologically biased.

a genus of plants of the family Hamamelida-ceae (sometimes attributed to the family Altingiaceae). They are tall deciduous trees with palmatilobate leaves. The small flowers, which are diclinous and lack perianths, are gathered into heads. There are five or six species, distributed in North and South America and in Asia. These trees all exude an aromatic balsam called storax when their bark is damaged. The storax obtained from Liquidambar orientalis and sweet gum (L. styraciflua) is used commercially. Both of these species, which are ornamental, are cultivated on the Black Sea Shore of the Caucasus.

Feedback
Flashcards & Bookmarks ?
Please log in or register to use Flashcards and Bookmarks. You can also log in with
Flashcards ?
My bookmarks ?
+ Add current page to bookmarks
Mentioned in ?
References in periodicals archive ?
Acers colour up wonderfully and many cherries manage fiery autumn tints, but for sheer over-the-top bonfire brightness, you can't beat a liquidambar.
garden life; Go by the book for inspiration
Best of the Bunch Sweet gums FOR the ultimate example of trees producing autumn foliage colour, the Sweet Gum, Liquidambar styraciflua, has to take top prize.
Notebook
It's easy to find liquidambar and tulip trees with strong trunks.
Which tree is the best buy?