Before the advent of rapid travel and modern means of long distance communication, particular localities kept time according to the noontime position of the Sun. Because this varied east or west of any given location, the local time also varied as one traveled east or west. The imposition of standard time zones, in which one must set her or his watch forward or backward as an imaginary line is crossed, is a comparatively recent innovation. Time zones serve many purposes, but, to properly cast a horoscope, astrologers must find the true local time during which a native was born. In other words, they must convert a birth time expressed in standard time back into local “Sun time.” The more common designation for Sun time is local mean time.

Traditionally, astrologers made this conversion by making certain calculations based on the longitude where a native was born. In more recent years, tables of time conversion (astrologers’ atlases, such as Longitudes and Latitudes in the U. S.) have been published by people who have made the necessary calculations for most large and medium-size cities, thus saving the astrologer a step in the calculations necessary to set up a chart. The personal computer revolution has largely eliminated the need for such tables, as such calculations have been incorporated into chart-casting programs. 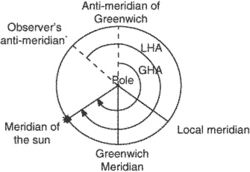