[‚lō·kə′mō·shən]
(science and technology)
Progressive movement, as of an animal or a vehicle.
McGraw-Hill Dictionary of Scientific & Technical Terms, 6E, Copyright © 2003 by The McGraw-Hill Companies, Inc.
The following article is from The Great Soviet Encyclopedia (1979). It might be outdated or ideologically biased.

in animals and man, a variety of movement, described by an active shift of the body in space, that includes swimming, flying, and various kinds of movement on the ground (including man’s walking and running).

Locomotion plays an enormously important role in the life of animals. For example, they move when seeking food and escaping enemies. There are many kinds of locomotion, from the very simplest amoeboid movements of some unicellular organisms to complex locomotor acts.

The kinds of locomotion have changed and become more complex during the course of animal evolution, and they have largely determined the structural characteristics of the animals. The appearance of new kinds of locomotion is associated with improvements of the locomotor apparatus, the sense organs, and, especially, the central nervous system. Locomotion is most complex and varied in vertebrates, a brilliant example of the relationship between form and function in evolution (see Figure 1); it includes swimming, flying, gliding, climbing, jumping, brachiation (swinging by the arms), and walking and running on four or on two legs.

The various gaits (walk, trot, amble, four-legged or two-legged ricochet, gallop), unlike the methods of locomotion, are determined not by the structure of the locomotor apparatus but by differences in the coordination of the extremities. The changes in locomotion during the course of the transformation of ape to man have played an exceptionally important role: climbing trees facilitated the formation of the grasping organs—the hands— and the transition to walking upright freed the hands for use as organs of work. 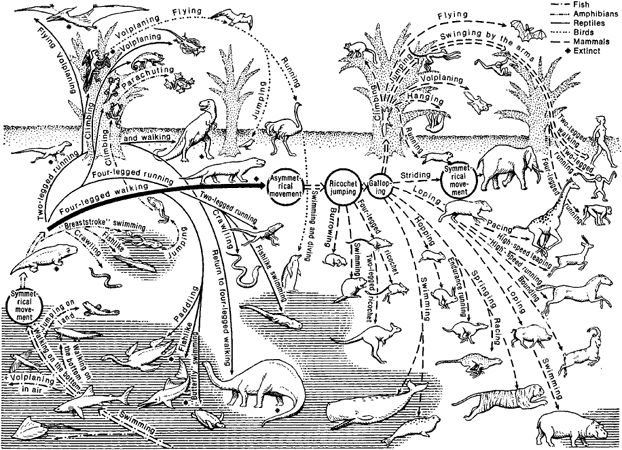 Figure 1. The original mode of locomotion was swimming by flexing the body in a horizontal plane. With the emergence of animals onto dry land, the extremities became the chief organs of locomotion. The basic form of locomotion of terrestrial vertebrates is walking and, for high speeds, running (on four or, less commonly, on two legs). There are two main types of terrestrial locomotion: symmetrical, in which the extremities operate alternately (the front paw always being followed by the hind paw diagonal to it, and rarely the reverse), and asymmetrical, in which the hind paws work alternately or synchronously with the front paws. The earliest terrestrial vertebrates traveled by symmetrical locomotion at a gait by which all paws worked by turn at equal intervals. The need for more rapid locomotion, combined with inadequacies of the locomoter apparatus itself, resulted in a change in rhythm. The interval in the operation of diagonal extremities diminished, while that of extremities on the same side increased: first, a trotlike walk developed; subsequently, a trot developed with diagonal extremities working in unison. Only when the locomotor apparatus improved radically (coinciding with the appearance of mammals) did the amble (whereby extremities on the same side worked in unison) and asymmetrical locomotion (more efficient and swifter than symmetrical) develop. This led to the appearance of the four-legged ricochet, from which evolved the gallop (the most progressive form of locomotion and characteristic only of mammals).
The Great Soviet Encyclopedia, 3rd Edition (1970-1979). © 2010 The Gale Group, Inc. All rights reserved.

Feedback
Flashcards & Bookmarks ?
Please log in or register to use Flashcards and Bookmarks. You can also log in with
Flashcards ?
My bookmarks ?
+ Add current page to bookmarks
Mentioned in ?
References in periodicals archive ?
But she admitted Locomotion will always hold a special place in her heart.
30 years as a Kylie impersonator? I should be so lucky! TRACCI'S MADE A LIVING FROM PERFORMING AS AUSSIE STAR
The software Image-Pro Plus6.0 was used to capture the foot locomotion trajectory of ant from the movies (Figure 2), and then the PEP and AEP could be found out easily.
A Bioinspired Gait Transition Model for a Hexapod Robot
There are different sensors in an actual animal body that supports its locomotion in uneven terrains, and it's very difficult to implement all those sensors in a robot body, but there are some essential senses one need to get for a successful locomotion.
Design and testing of central pattern generator gait testing platform for hexapod with reflex learning
In this study, we investigated the behavioral tendencies of locomotion (Kruglanski et al., 2000).
Employee work experience, locomotion, and voice behavior
Children will be able to take part in the Locomotion Halloween trail and make their own spooky magnets to take away.
Days out that are memorable journeys
* The loss or loss of use of one lower extremity together with the loss or loss of use of one upper extremity, which so affect the functions of balance or propulsion as to preclude locomotion without the aid of braces, crutches, canes or a wheelchair
Housing & vehicle grants
Across a wide range of phyla and diverse modes of locomotion, the speed of locomotion generally increases with increasing body size (Schmidt-Nielsen, 1975).
Intraspecific scaling relationships between crawling speed and body size in a gastropod
3 - the older sister of Locomotion's resident operating steam locomotive, Furness Railway No.
Vintage vehicles descend on County Durham museum for a weekend of events; Locomotion: The National Railway Museum, at Shildon, held its annual Vintage Vehicle Rally this weekend
Price includes Private coach travel from your local area One night's stay with three course evening meal & cooked breakfast Visit to Durham Visit to Locomotion, National Railway Museum to see Flying Scotsman Tower of London Poppies on Tour, Liverpool 7 November 2015 2 days from PS119 See the 'Weeping Window' on the facade of St George's Hall, Liverpool, as we continue to remember the events that were taking place 100 years ago.
READER OFFER
It is no surprise that compliant control strategies offer a number of advantages for humanoid locomotion. Low joint stiffness can help minimize damage to mechanisms and actuators in the event of a collision and improve the safety of robots operating in close proximity to humans.
Compliant locomotion: a model-based approach
The human mind is a function of locomotion, yet locomotion does not explain the functioning of the human mind.
Locomotion and imagination