see Pearl, ThePearl, The,
one of four Middle English alliterative poems, all contained in a manuscript of c.1400, composed in the West Midland dialect, almost certainly by the same anonymous author, who flourished c.1370–1390.
..... Click the link for more information. .

see solitairesolitaire
or patience,
any card game that can be played by one person. Solitaire is the American name; in England it is known as patience. There are probably more kinds of solitaire than all other card games together.
..... Click the link for more information. .
The Columbia Electronic Encyclopedia™ Copyright © 2013, Columbia University Press. Licensed from Columbia University Press. All rights reserved. www.cc.columbia.edu/cu/cup/ 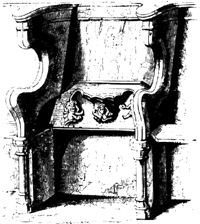 miserere
A ledge on the bottom of a hinged seat in a church; when the seat is raised, the ledge provides some support for a worshiper or choir singer who, in standing, leans against it.
McGraw-Hill Dictionary of Architecture and Construction. Copyright © 2003 by McGraw-Hill Companies, Inc.

Chiefly Brit any of various card games for one player only, in which the cards may be laid out in various combinations as the player tries to use up the whole pack
Collins Discovery Encyclopedia, 1st edition © HarperCollins Publishers 2005

Feedback
Flashcards & Bookmarks ?
Please log in or register to use Flashcards and Bookmarks. You can also log in with
Flashcards ?
My bookmarks ?
+ Add current page to bookmarks
Mentioned in ?
References in periodicals archive ?
It's loose change to Ferdinand, clubs need to wake up to the fact that our overpaid footballer's are out of control, before the fans lose patience.
WRITE STUFF: Reader's Sports letter
For most of the season the supporters have got behind the team but the constant lacklustre performances allied to the large increase in next season's ticket prices has seen them finally lose patience. It is time for Wolves to have a major clear-out of at least half the senior players who are either over the hill, not interested or not good enough (in some cases all three!).
Sports Letters: No more excuses
Keegan's decision to haul pounds 19million strike duo Nicolas Anelka and Robbie Fowler out of the bore draw with Boro was a telling sign he is starting to lose patience in a side which has managed only one goal in five outings.
FOOTBALL: Keegan frustrated by Blues i; Man City 0 Middlesbrough 0
Vialli, who once again taught a few of his managerial rivals the art of accepting decisions with grace (not Wise's red card, but that of Desailly), must surely lose patience with his cap'n before too long.
Sport On TV
KEITH WRIGHT has urged Hibs supporters not to lose patience with John Collins as the long-term future of the club is in good hands.
Football: Collins will get it Wright; SCOTTISH CUP FINAL COUNTDOWN..
Hay is beginning to lose patience with the son of the Argentine football legend of the same name and wants the youngster to give the club a quick response.
Football: Diego walk-out