airfoil, surface designed to develop a desired force by reaction with a fluid, especially air, that is flowing across the surface. For example, the fixed wing surfaces of an airplane produce lift, which opposes gravity. Airfoils that are manipulated to produce variable forces are called control surfaces. Ailerons, control surfaces hinged to the trailing edges of wings, can produce rolling, which is rotational motion of the aircraft about a line running through its fuselage, or yawing, which is rotational motion about a line running from the top to the bottom of an aircraft. Modern aircraft have fairly complex arrays of control surfaces, including elevators, a rudder, and flaps. Elevators, which are hinged to the rear of the horizontal airfoil of the tail assembly, are used to produce pitching, which occurs when an airplane in level flight points its nose upward or downward. The rudder, which is hinged to the rear of the vertical airfoil of the tail assembly, is used to produce yawing. Flaps are located near the ailerons to increase lift for takeoff and landing. Spoilers, which can be made to protrude from lifting surfaces to give controlled reduction of lift, often replace ailerons and elevators. In aircraft of the swing-wing type, in which the sweep of the wings is variable, the entire wing can be considered a control surface. Other airfoils include propeller blades and the blades utilized in turbojet engines.
The Columbia Electronic Encyclopedia™ Copyright © 2022, Columbia University Press. Licensed from Columbia University Press. All rights reserved. 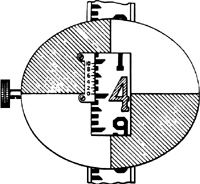 Feedback
Flashcards & Bookmarks ?
Please log in or register to use Flashcards and Bookmarks. You can also log in with
Flashcards ?
My bookmarks ?
+ Add current page to bookmarks
Mentioned in ?
References in periodicals archive ?
For instance, you can try a rolled-up towel instead of a ready-made lumbar roll, or a piece of foam rather than a fancy car seat or seat wedge.
Back savers
(30) The successful treatment involved neural stretches (with supine flexion exercises), lumbar extensions, and postural correction in sitting (with a lumbar roll).
Conservative management of a 31 year old male with left sided low back and leg pain: a case report
If your seat provides inadequate support for your lower back, try a rolled-up towel or lumbar roll. A seat pad may also help.
Improving your posture