see bacteriophagebacteriophage
, virus that infects bacteria and sometimes destroys them by lysis, or dissolution of the cell. Bacteriophages, or phages, have a head composed of protein, an inner core of nucleic acid—either deoxyribonucleic acid (DNA) or ribonucleic acid (RNA)—and a
..... Click the link for more information. ; recombinationrecombination,
process of "shuffling" of genes by which new combinations can be generated. In recombination through sexual reproduction, the offspring's complete set of genes differs from that of either parent, being rather a combination of genes from both parents.
..... Click the link for more information. .
The Columbia Electronic Encyclopedia™ Copyright © 2013, Columbia University Press. Licensed from Columbia University Press. All rights reserved. www.cc.columbia.edu/cu/cup/

Almost all strains of bacteria are lysogenic; that is, they have the capacity on rare occasions to lyse with the liberation of particles of bacteriophage (see illustration). Such particles can be detected by their ability to form plaques (colonies of bacteriophage) on lawns of sensitive (indicator) bacteria. The genetic determinant of the capacity of lysogenic bacteria to produce bacteriophage is a repressed phage genome (provirus) which exists in the bacterium in one of two states: (1) integrated into the bacterial chromosome (most cases), or (2) occupying some extra-chromosomal location (rare cases). 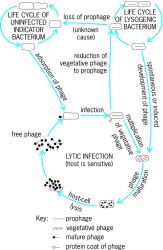 Bacteriophages which have the potential to exist as provirus are called temperate phages. When the provirus is integrated into the bacterial genome, it is called prophage. When the germinal substance (deoxyribonucleic acid or deoxyribonucleoprotein) of certain temperate phages enters a sensitive bacterium, the outcome may be death (lysis) for the bacterium as a result of phage multiplication, or it may result in the integration of the phage nucleic acid into the host genome (as a prophage), with the formation of a stable lysogenic bacterium. The lysogenic strain is designated by the name of the sensitive strain followed, in parentheses, by the strain of lysogenizing phage, for example, Escherichia coli (λ). Such a bacterium differs from its nonlysogenic ancestor in one very special way: It is immune to lysis by phage homologous to its carried prophage. See Bacteriophage

the genetically determined capacity of bacteria to undergo lysis, with the release of a bacteriophage, through a number of generations after direct infection.

The theory of lysogeny was elaborated in 1950 by the French scientists A. Lwoff and A. Gutman, who showed that the lysogenic state is associated with the presence in bacterial cells of a potentially infectious structure called a prophage. In each generation of lysogenic bacteria a very small proportion of the cells (approximately one per million) undergoes lysis, releasing from 70 to 150 particles of temperate phage. The frequency of the conversion of the prophage to an infectious state (prophage induction) may be increased by a number of agents, such as ultraviolet rays.

After infection of the bacterial cell by the temperate phage, the process of infection can develop in either of two directions: the lytic cycle or lysogenization. The lytic cycle, like the cycle in which the bacteria are infected with virulent phages, ends with lysis of the cells and the release of the progeny of the phage into the surrounding medium. In lysogenization, immunity to the infecting phage develops as a result of biosynthetic processes in the cell, phage DNA is incorporated by the bacterial DNA and subsequently replicated together with it as one of its components (prophage), and the bacterium survives and becomes lysogenic (see Figure 1). 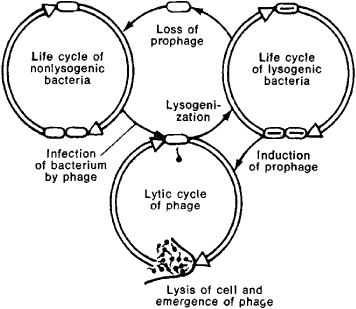 The fate of the cell is decided during the first stages of infection and depends chiefly on when immunity develops. Lysogenization may take place if the onset of immunity occurs before the development of the infection reaches the stage that leads irreversibly to lysis. Bacterial genomes may contain the prophages of several different phages simultaneously (multiple lysogeny), in which case the cells will be immune to all of the phages. Changes in several of the properties of the bacterial cell (lysogenic conversion) may result from lysogenization, owing to the acquisition by the bacterium of new genetic information. Artificially produced lysogenic bacteria do not differ in their properties from lysogenic bacteria found under natural conditions.

Recovery, or loss of the prophage, occurs in a small proportion of the progeny of a lysogenic cell. The cells that have lost their prophage give rise to nonlysogenic lines. The frequency of this process may be increased by the action of ultraviolet rays. Thus, lysogeny, a complex form of viral infection in bacteria, may allow for a large number of cell generations between the moment the bacteria are infected with the phage and the lysis of the cells.

Feedback
Flashcards & Bookmarks ?
Please log in or register to use Flashcards and Bookmarks. You can also log in with
Flashcards ?
My bookmarks ?
+ Add current page to bookmarks
Mentioned in ?
References in periodicals archive ?
In lysogeny, P1 can exist within a bacterial cell as a prophage in that it exists by replicating with the host chromosome and does not cause cell death.
A unique feature of phage P1 is that during lysogeny its genome is not incorporated into the bacterial chromosome as is commonly observed during lysogeny bo other bacteriophage.
Different classes of temperate bacteriophage vary in mechanisms for maintenance of lysogeny. For example, the lambda prophage requires the continuous expression of only one gene (c1) and this is enough to prevent entry into the lytic cycle.
P1, however, requires the continuous expression of at least two genes, c1 and c4, for maintenance of lysogeny. The c1 gene of P1 codes for a repressor that is functionally analogous to that encoded by the lambda c1 gene.
If both lysis and lysogeny occur, a turbid plaque is formed (turbid-plaque phenotype).
ISOLATION OF PHAGE P1 REGULATORY MUTANTS
reads method reads mapped to mapped to mapped 23S (%) 16S (%) Crop Oligonucleotide 15,108,840 6,934,692 4,6419O9 2,045.615 (67) (30) Crop Enzymatic 11,107,024 3,449,889 2,354,3O4 1,043,099 (68) (30) Lysogeny Enzymatic 5,500,677 3,970,130 3,054,529 711,176 broth (77) (18) Sample No.
Investigation into the physiologies of Aeromonas veronii in vitro and inside the digestive tract of the medicinal leech using RNA-seq
Papers giving general information include the history of phage research and therapy, phage biology, bacteriophage evolution and the role of phages in host evolution, phage ecology and bacteria pathogenesis, phage lysis, and lysogeny, prophage induction and lysogenic conversion.
Phages; their role in bacterial pathogenesis and biotechnology
aeruginosa strains were grown at 37[degrees]C in lysogeny broth (LB) or on LB agar plates.
Royal Jelly Inhibits Pseudomonas aeruginosa Adherence and Reduces Excessive Inflammatory Responses in Human Epithelial Cells
Lysogeny broth (LB) medium (10 g/L tryptone; 5 g/L yeast extract; 5 g/L NaCl; and 15 g/L Bacto agar) was used as growth medium for routine culture of C.
Pantoea sp. isolated from tropical fresh water exhibiting N-Acyl homoserine lactone production
All isolates were El Tor biotype and had the El Tor type regulatory gene for phage lysogeny and the co-regulated pilus A gene identified by PCR (6,7).
Recent clonal origin of cholera in Haiti
To the Editor: Vibrio cholerae O1, the causative agent of cholera, has 2 biotypes (classical and El Tor), which have traditionally been distinguished by phenotypic tests and by genetic differences in the major toxin-coregulated pilus (TCP) gene, the tcpA allele of the TCP cluster (1), the rstR region (regulatory region for phage lysogeny) of CTX phages (2), the type of cholera toxin (CT) produced, and the infection pattern of the disease they cause.
Outbreaks caused by new variants of Vibrio cholerae O1 El Tor, India