[mag′ned·ik mə′rid·ē·ən]
(geophysics)
A line which is at any point in the direction of horizontal magnetic force of the earth; a compass needle without deviation lies in the magnetic meridian.
McGraw-Hill Dictionary of Scientific & Technical Terms, 6E, Copyright © 2003 by The McGraw-Hill Companies, Inc.
The following article is from The Great Soviet Encyclopedia (1979). It might be outdated or ideologically biased. 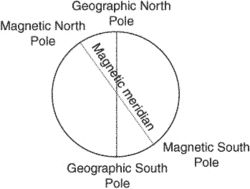 A great circle in the vertical plane passing through the magnetic axis of a freely suspended magnet influenced by the earth's magnetic field and that also passed through the magnetic north and south poles.
An Illustrated Dictionary of Aviation Copyright © 2005 by The McGraw-Hill Companies, Inc. All rights reserved