[mag′ned·ik ri′kȯrd·iŋ]
(electronics)
Recording by means of a signal-controlled magnetic field.
McGraw-Hill Dictionary of Scientific & Technical Terms, 6E, Copyright © 2003 by The McGraw-Hill Companies, Inc.
The following article is from The Great Soviet Encyclopedia (1979). It might be outdated or ideologically biased.

a system for the recording and playing back of information—in recording, by varying the remanent magnetism of a medium or its parts in conformity with the signals of the information recorded, and in playback, by its reverse conversion, so that information signals are produced that correspond to the variations indicated.

Magnetic recording is used to record sound (in tape recorders and dictaphones) or an image and its audio accompaniment (in video tape recorders). It is also used in measuring, monitoring, and computing signals (precision recording).

In magnetic recording (see Figure 1), electric signals delivered to the input channel (for example, the amplifier of a tape recorder) undergo amplification and various conversions in order to obtain the required recording quality. The last stage in the channel is the magnetic recording head. The magnetic field of the head, which is spread over the working gap, is proportional to the strength of the current in the head’s coil. The field affects a moving medium and, by magnetizing sections of the medium in conformity with the signals being recorded, produces a magnetic track. The medium may be a ferromagnetic body that is readily magnetized and remains magnetized for a long time; it may take the form of a string (magnetic wire), a tape (magnetic tape), a disk, a drum, or a sheet. The signal record (that is, the medium now carrying the magnetic track), as it moves, comes into contact with the working gap in the core of the magnetic playback head, which is analogous in construction to a recording head, and excites a magnetic flux proportional to the magnetization of the various sections of the track. The flux variations cause the appearance (in the coil of the head) of an electromotive force that contains the recorded information. 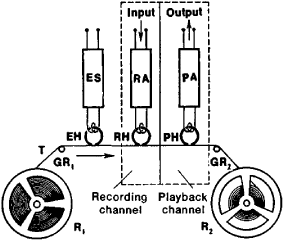 In the playback channel, in addition to the head, there are devices for amplifying the signals and making conversions the reverse of those in the recording channel. A recording is erased either by demagnetizing the medium or by uniformly magnetizing it to saturation. This may be done in a special device where the entire recording can be erased at once. During the recording itself, it may be done by means of an erasing head located in front of the recording head, with respect to the motion of the medium. (In this case, a specified value of AC or DC current is passed through the coil of the erasing head.)

The higher the recording speed, the better the quality of the recording. To record electric oscillations with audio frequencies between 30 hertz (Hz) and 16 kilohertz (kHz), a tape speed of 9.5 cm/sec is adequate. To record signals in a frequency range of up to 10 or 15 megahertz (MHz) on a video tape recorder, the translational velocity of the rotating head relative to the tape is increased to nearly 50 m/sec. Parallel recording tracks are placed on the medium to increase the density of a magnetic recording.

Magnetically recorded signals are copied either by rerecording (sometimes at a higher speed) or by contact printing in a thermal or magnetic field. The major trend in the development of magnetic recording is the improvement of mediums to increase density and fidelity.

Placing information (data, voice, video, etc.) on a ferromagnetic storage medium. See magnetic storage and ferromagnetic.
Copyright © 1981-2019 by The Computer Language Company Inc. All Rights reserved. THIS DEFINITION IS FOR PERSONAL USE ONLY. All other reproduction is strictly prohibited without permission from the publisher.

Feedback
Flashcards & Bookmarks ?
Please log in or register to use Flashcards and Bookmarks. You can also log in with
Flashcards ?
My bookmarks ?
+ Add current page to bookmarks
Mentioned in ?
References in periodicals archive ?
Super DLTtape Technology offers the next substantial advancement in three critical attributes of magnetic recording. These progressions in technology offer higher bit density, a far greater surface area than other storage mediums, and, more importantly, an increase in order of magnitude in track density.
Laser Guided Magnetic Recording
* CMR means Perpendicular Magnetic Recording (PMR) without the use of Shingled Magnetic Recording (SMR).
SDK to Begin Shipment of MAMR-Technology-based HD Media
"Toshiba Electronic Devices & Storage 's new helium-sealed enterprise HDD is the world 's first 14TB of storage capacity using conventional rather than shingled magnetic recording technology, giving enterprise customers the highest capacity HDD available in the market today for existing server and storage system architectures.
Toshiba targets CSPs, large enterprises, with 14TB CMR hard disk drive
Sharrock, "Time dependence of switching fields in magnetic recording media (invited)," Journal of Applied Physics, vol.
Structural Dependent Ferromagnetic-Nonmagnetic Phase Change in FePtRu Films
Moser, "Thermal effect limits in ultra high-density magnetic recording," IEEE Transactions on Magnetics, vol.
Synthesis of a High-Coercivity FePt-Ag Nanocomposite Magnet via Block Copolymer-Templated Self-Assembly
Shingled magnetic recording allows data to be squeezed closer together on a disk drive like shingles or tiles on a roof, thus allowing for drives to accommodate up to 25% more data per platter without compromising data integrity or reliability.
China's Baidu inks cooperation pact with Seagate
We design nanoscale antennas for ultra-fast and high-density magnetic recording as shown in Figure 9.
Efficient Analysis of Electromagnetic Fields for Designing Nanoscale Antennas by Using a Boundary Integral Equation Method with Fast Inverse Laplace Transform
(25)) Since then, multilayer structures with perpendicular magnetization have attracted much attention for potential application to magnetic recording media.
Artificial multilayers and nanomagnetic materials
Zhang noted that despite technical limitations associated with today's leading technology for writing to a drive -- perpendicular magnetic recording (PMR) -- other technologies such as HAMR will continue to drive up capacity.
60TB disk drives could be a reality in 2016
Modern magnetic recording technology employs the principle that the North Pole of a magnet is attracted to the South Pole of another and two like poles repulse.
New storage technology could speed up hard drives over a hundredfold
The RC5100 also supports advanced new technologies such as shingled magnetic recording (SMR), a key technology for achieving next-generation areal density points.
LSI Announces Industry's First 28nm Read Channel for Hard Disk
The sounds of birds calling, her complaints about jobs and the city The delicate touch of magnetic recording.
C90