magnetic resonance, in physics and chemistry, phenomenon produced by simultaneously applying a steady magnetic field and electromagnetic radiation (usually radio waves) to a sample of atoms and then adjusting the frequency of the radiation and the strength of the magnetic field to produce absorption of the radiation. The resonance refers to the enhancement of the absorption that occurs when the correct combination of field and frequency is reached. The procedure is analogous to tuning a radio dial exactly to a desired station.

Several distinct kinds of magnetic resonance exist. In cyclotron resonance the magnetic field is adjusted so that the frequency of revolution of a charged particle around the field lines is exactly equal to the frequency of the radiation. This principle is used to produce beams of energetic particles in particle accelerators.

Other magnetic resonance phenomena depend on the fact that both the proton and electron exhibit intrinsic spin about their own axes and thus act like microscopic magnets. Electron paramagnetic resonance (EPR) arises from unpaired electron spins in liquids or solid crystals. Because of their own magnetism, the spins line up with the external magnetic field. For a given magnetic field the spins can be made to “flip” to the opposite direction when they absorb radiation at a corresponding “resonant” frequency. From the point of view of quantum mechanics, the spin flips can be considered as transitions between states that become separated in energy when the magnetic field is applied. The effect is related to the splitting of spectral lines when an atom is subjected to a magnetic field (see spectrum; Zeeman effect).

Nuclear magnetic resonance (NMR) is analogous to EPR; however NMR is produced by the much smaller magnetism associated with unpaired nuclear spins. The NMR resonant frequency (usually that of protons in complex molecules) is slightly shifted by interactions with nearby atoms in the sample, thus providing information about the chemical structure of organic molecules and other materials. NMR is now extensively employed in medicine, although the use of the word “nuclear” is avoided, the preferred name being magnetic resonance imaging (MRI). The technique provides high-quality cross-sectional images of internal organs and structures. Paul Lauterbur, an American physicist, and Peter Mansfield, a British physicist, shared the 2003 Nobel Prize in Physiology or Medicine for pioneering contributions that later led to the application of magnetic resonance in medical imaging.

Magnetic resonance can also occur without an external magnetic field from interactions of the electron and nuclear spins; such resonance produces the fine and hyperfine structure of atomic spectra.

A phenomenon exhibited by the magnetic spin systems of certain atoms whereby the spin systems absorb energy at specific (resonant) frequencies when subjected to alternating magnetic fields. The magnetic fields must alternate in synchronism with natural frequencies of the magnetic system. In most cases the natural frequency is that of precession of the bulk magnetic moment of constituent atoms or nuclei about some magnetic field. Because the natural frequencies are highly specific as to their origin (nuclear magnetism, electron spin magnetism, and so on), the resonant method makes possible the selective study of particular features of interest. For example, it is possible to study weak nuclear magnetism unmasked by the much larger electronic paramagnetism or diamagnetism which usually accompanies it.

Nuclear magnetic resonance (that is, resonance exhibited by nuclei) reveals not only the presence of a nucleus such as hydrogen, which possesses a magnetic moment, but also its interaction with nearby nuclei. It has therefore become a most powerful method of determining molecular structure. The detection of resonance displayed by unpaired electrons, called electron paramagnetic resonance, is also an important application. See Magnetic resonance, Magnetism

where Δξ is the energy difference between the magnetic substates and ħ is Planck’s constant.

If electromagnetic energy is absorbed by the nuclei, the resonance is called nuclear magnetic resonance. The magnetic moments of nuclei are caused by their spin /. The number of nuclear magnetic substates is equal to 2I + 1 , and the intervals between adjacent substates are identical and equal to

where γ is the gyromagnetic ratio. The selection rules permit transitions only between adjacent substates; therefore, the same resonance frequency corresponds to all transitions (see Figure 1), the absorption lines overlap, and a single line is observed. 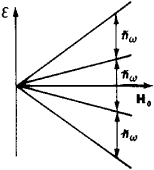 Figure 1. Splitting of energy levels in an external magnetic field H0 in the case of nuclear magnetic resonance for I = 3/2

However, in some crystals for nuclei with spin I > 1 an additional shift of levels takes place because of the interaction of the nuclear quadrupole moment with the extranuclear nonuni form crystalline electric field E at the site of the nucleus. As a result, more lines appear in the absorption spectrum.

Cyclotron resonance, which is observed in metals and semiconductors situated in a constant magnetic field and is the resonance absorption of electromagnetic energy associated with the periodic motion of conduction electrons and holes in a plane perpendicular to the field H, is also classified as a magnetic resonance.

[mag′ned·ik ¦rez·ən·əns]
(physics)
A phenomenon exhibited by the magnetic spin systems of certain atoms whereby the spin systems absorb energy at specific (resonant) frequencies when subjected to magnetic fields alternating at frequencies which are in synchronism with natural frequencies of the system. Also known as spin resonance.
McGraw-Hill Dictionary of Scientific & Technical Terms, 6E, Copyright © 2003 by The McGraw-Hill Companies, Inc.