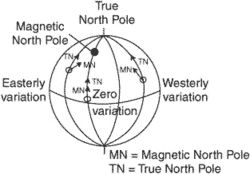 In navigation, at a given place and time, the horizontal angle between true north and magnetic north measured in degrees East (+) or West (−) according to whether magnetic north lies east or west of true north. The magnetic variation indicated on a map or a chart is not a fixed quantity but is subject to change. Magnetic variation is indicated by dashed lines on maps and charts. Most maps and charts indicate the rate of annual change of variation also.
An Illustrated Dictionary of Aviation Copyright © 2005 by The McGraw-Hill Companies, Inc. All rights reserved

Feedback
Flashcards & Bookmarks ?
Please log in or register to use Flashcards and Bookmarks. You can also log in with
Flashcards ?
My bookmarks ?
+ Add current page to bookmarks
Mentioned in ?
References in periodicals archive ?
AIM 1-1-18 goes on to say that a properly functioning RNAV system with a current, accurate navigation database should still fly the correct ground track for any loaded instrument procedure, despite differences in magnetic course attributable to magnetic variation source.
Aiming higher: Just like sunrises and taxes, AIM updates are inevitable. So much so that we tend not to notice. But, like a beautiful sunrise, there can be gems in those updates
The National Geophysical Data Center, a division of NOAA, is responsible for creating magnetic variation models for the U.S.
Mag course mismatches: how many direct magnetic courses can there be between two points? Sometimes the answer is three. How many can possibly be right? Actually, all of them
There are a couple of standard abnormalities in the application of magnetic variation for certified devices.
How the GPS handles it
The GPS calculates the magnetic course by conjuring the great circle route based upon the lat/long value of two VORs, and then adds the local magnetic variation at the aircraft's present position.
GPS course mismatch: your GPS can take you VOR to VOR just fine, but the numbers you see in the flight plan might not match what the chart calls for
T., "Magnetic variations associated with ocean waves and swell," Journal of Geophysical Research, Vol.
Magnetic Field Induced by Wake of Moving Body in Wind Waves
The term variometer is generally applied to any instrument that registers magnetic variations, whether it be changes in magnetic declination or any other component of the field, horizontal or vertical.
'A comparison of two simple magnetometers'
For example there is a facsimile reproduction of Bernacchi's South Polar Times article of May 1902, which bore the catchy title of "The ESCHENHAGEN MAGNETIC INSTRUMENTS and the MAGNETIC VARIATIONS and DISTURBANCES they record." This had characteristically wonderful illustrations by E.A.
South by Northwest: The Magnetic crusade and the contest for Antarctica