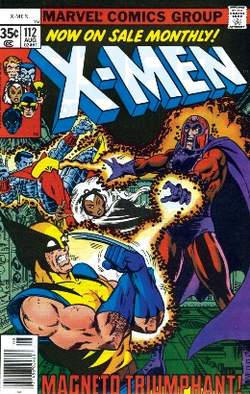 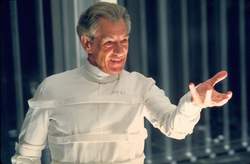 (magneto ringer), a manually operated magneto-electric device used in telephones to send call signals and disconnect signals in manually operated rural telephone exchanges. A magneto generates an alternating current with a frequency of 18–21 hertz, a voltage of 60–70 volts, and a power output of 3.8 watts into a load resistance of 2.5 kiloohms.

Two types of magnetos are made: one type has two stationary rectangular magnets, a rotating (wound) armature, a reduction gear, and current-collecting springs; the other has a stationary (wound) armature and a rotating ring-shaped multipole magnet. The required current frequency is produced if the crank is rotated at a rate of 3–3.5 revolutions per sec.

a magnetoelectric AC generator (usually in combi-nation with an induction coil) designed to produce an electric discharge between the electrodes of a spark plug, which ignites the gas mixture in the cylinders of an internal-combustion engine. Magnetos have been used in the ignition systems of aircraft, tractor, automobile, motorcycle, and other engines; since the 1960’s they have virtually gone out of use.

[mag′nēd·ō]
(electricity)
An alternating-current generator that uses one or more permanent magnets to produce its magnetic field; frequently used as a source of ignition energy on tractor, marine, industrial, and aviation engines. Also known as magnetoelectric generator.
McGraw-Hill Dictionary of Scientific & Technical Terms, 6E, Copyright © 2003 by The McGraw-Hill Companies, Inc.

A small engine-driven permanent-magnet electric generator designed to supply high-voltage current to the spark plugs in sequence and at a precise time in the compression stroke of an internal combustion engine.
An Illustrated Dictionary of Aviation Copyright © 2005 by The McGraw-Hill Companies, Inc. All rights reserved

a small electric generator in which the magnetic field is produced by a permanent magnet, esp one for providing the spark in an internal-combustion engine
Collins Discovery Encyclopedia, 1st edition © HarperCollins Publishers 2005

Feedback
Flashcards & Bookmarks ?
Please log in or register to use Flashcards and Bookmarks. You can also log in with
Flashcards ?
My bookmarks ?
+ Add current page to bookmarks
Mentioned in ?
References in periodicals archive ?
Currently, both Electroair and Sure-Fly systems replace just one of your aircraft's magnetos. That's the result of a pretty ruthless cost/benefit analysis.
Electronic Ignition: Coming of Age: A second electronic ignition system has received certification. We like the choices now available for those who want to get rid of one magneto
(31.) Magnetos ethnic identity became even more unsettled when it was revealed that he was the father of Quicksilver and the Scarlet Witch, both of whom had been clearly identified as gypsies.
A likely Jew: Magneto, the holocaust, and comic-book history
Just before takeoff on the day of the crash, Thomas tested both of the magnetos, the NTSB report said.
Plane's problem tied to generator
That's a SIM module sitting to the left of a Slick magneto in the main image in the center of the page, and the drive side of the module in the photo at the lower left of the page.
SUREFLY'S SIM DROP-IN IGNITION
The breaker assembly also turns with the armature and operates off an internal cam in the magneto frame.
Reconsidering the Farmall kick: Farmall magnetos had condensers
Assuming the engine is in good health, including magnetos, plugs and the ignition system as a whole, we think the Champion SlickStart can contribute to quicker starts, based on the Lycoming and Continental engines we've operated with it installed.
Engine tough to start? SlickStart, iStart help: champion's SlickStart ignition booster provides a firestorm of supplemental spark, while the iStart supplemental fuel delivery system helps injected engines
The next day, as soon as I could find the time, I talked to my mechanic about the problem and ordered two overhauled magnetos. He'd install them when they arrived and I'd be back in business.
Why there are two
Later magnetos had an impulse that could be enclosed, because the impulse was redesigned so that gravity dropped the contact end of the impulse arm.
Farmall Regular's kick was intended
For aircraft engines, magnetos were a godsend because they were independent of the electrical system, fairly compact and relatively lightweight.
SureFly SIM ignition: maintenance free: SureFly's drop-in electronic ignition may not offer more power, but it has an engine-matching TBO, is easy to install and promises maintenance-free reliability
In flight, a typical dual magneto-driven ignition system is set so the spark from both magnetos fires when the piston is 25 or so degrees before top dead center of its stroke.
Hand-propping demystified: yes it's risky, but so is flying meanwhile, we still have to start the engines on airplanes tacking an electrical system
That level of sophistication simply does not apply to anything about aircraft magnetos and the stress they feel from lean or rich of peak ignition system operation.
Lop mag checks