The magnetostrictive effect is exploited in transducers used for the reception and transmission of high-frequency sound vibrations. Nickel is often used for this application. See Ultrasonics

a change in the shape and size of a body upon magnetization. The phenomenon was discovered in 1842 by J. Joule. In ferromagnets and ferrimagnets (such as iron, nickel, cobalt, gadolinium, and terbium, as well as a number of alloys and ferrites), magnetostriction reaches a significant magnitude (relative extension Δl/l ~ 10-6-102). Magnetostriction is very small in antiferromagnets, paramagnets, and diamagnets.

The phenomenon that is the inverse of magnetostriction—a change in the magnetization of a ferromagnetic specimen upon deformation—is called the magnetoelastic effect, or sometimes the Villari effect.

In the modern theory of magnetism, magnetostriction is considered to be a result of the manifestation of the fundamental types of interactions in ferromagnetic bodies (electrical exchange interaction and magnetic interaction). Accordingly, two types of essentially different magnetostriction deformations of a crystal lattice are possible: those resulting from a change in magnetic forces (dipole-dipole and spin-orbital deformations) and those resulting from a change in exchange forces.

Upon magnetization of ferromagnets and ferrimagnets, magnetic forces act in the range of fields from 0 to a field with intensity Hs, in which a specimen reaches its technical magnetic saturation Is. Magnetization in this range of fields is caused by processes of displacement of domain boundaries and rotation of domain magnetic moments. Both processes change the energy state of the crystal lattice, which is manifested in the change of the equilibrium distances between its points. As a result, the atoms are shifted and magnetostrictive deformation of the lattice takes place. Magnetostriction of this type is anisotropic (it depends on the direction and maguitude of the magnetization J) and is manifested primarily in a change in the shape of the crystal with virtually no change in its volume (linear magnetostriction). Semiempirical formulas are used to calculate linear magnetostriction. For example, the magnetostriction of ferromagnetic crystals of cubic symmetry that are magnetized to saturation is calculated from the formula

Magnetostriction caused by exchange forces is observed in ferromagnets in the region of magnetization above technical saturation, where the magnetic moments of the domains are fully oriented in the direction of the field and only an increase in the absolute magnitude of Js (the paraprocess, or true magnetization) takes place. Magnetostriction caused by exchange forces in cubic crystals is isotropic—that is, it is manifested in a change in the volume of the body. In hexagonal crystals (such as gadolinium), such magnetostriction is anisotropic. In most ferromagnetic substances at room temperature, magnetostriction resulting from the paraprocess is small; it is also small close to the Curie point, where the paraprocess almost entirely determines the ferromagnetic properties of a substance. However, in some alloys that have a low coefficient of thermal expansion (Invar magnetic alloys) magnetostriction is great (in magnetic fields of the order of 8 ×l04 amperes per meter [A/m], or 103 oersteds, the ratio ΔV/V is of the order of 10-5). Significant magnetostriction of the paraprocess is also found in ferrites upon annihilation or creation of noncollinear magnetic structures by a magnetic field. 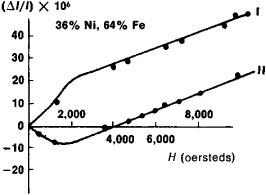 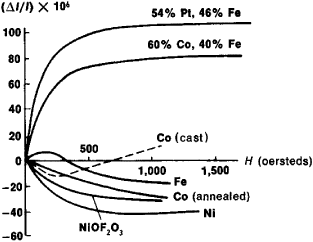 Figure 2. Dependence of longitudinal magnetostriction of a number of polycrystalline metals, alloys, and compounds on magnetic field intensity

Magnetostriction displays a hysteresis effect in the region of technical magnetization (Figure 3). It is also strongly affected by temperature, elastic stresses, and even the character of the demagnetization to which the specimen was subjected before measurement. 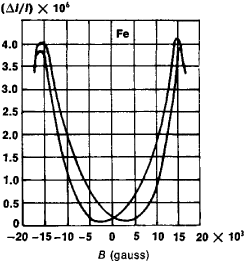 Figure 3. Magnetostrictive hysteresis of iron caused by its magnetic hysteresis

Comprehensive study of magnetostriction contributes, above all, to the elucidation of the physical nature of the forces that determine the ferrimagnetic, antiferromagnetic, and ferromagnetic behavior of matter. The study of magnetostriction, especially in the region of technical magnetization, also plays an important role in the search for new magnetic materials; for example, the high magnetic permeability of Permalloy-type alloys has been observed to be associated with their low magnetostriction (in addition to a low constant of magnetic anisotropy).

Anomalies of the thermal expansion of ferromagnetic, ferrimagnetic, and antiferromagnetic bodies are associated with magnetostriction effects. The anomalies are due to the fact that the magnetostrictive deformations caused by exchange forces (and by magnetic forces in general) in the lattice are manifested not only when the bodies are placed in a magnetic field but also when they are heated in the absence of a field (thermostriction). The change in the volume of bodies as a result of thermostriction is especially significant in magnetic phase transitions (at the Curie and Neel temperatures and at the temperature of transition of collinear magnetic structure into noncollinear structure). The superposition of these volumetric changes on ordinary thermal expansion, which is due to the thermal oscillations of atoms in the lattice, sometimes leads to an anomalously low value of the coefficient of thermal expansion in some materials. For example, experiments have proved that the low thermal expansion of Invar-type alloys is due to the influence of the negative magnetostrictive deformations that arise during heating and that compensate almost entirely for the “normal” thermal expansion of these alloys.

Various anomalies of elasticity in ferromagnets, ferrimagnets, and antiferromagnets are related to magnetostriction. The sharp anomalies in the elastic modulus and modulus of internal friction that are observed in these substances in the area of the Curie and Neel points and other magnetic phase transitions result from the magnetostriction that arises upon heating. In addition, redistribution of the magnetic moments of domains takes place when ferromagnetic and ferrimagnetic bodies are affected by elastic stresses even in the absence of an external magnetic field (in the general case the absolute value of the spontaneous magnetization of a domain also changes). The processes are accompanied by additional magnetostrictive deformation of the body, mechanostriction, which leads to deviations from Hooke’s law. The phenomenon of the change in the elastic modulus E of ferromagnetic metals (the A£ effect) upon exposure to a magnetic field is directly related to mechanostriction.

Apparatus that operates on the principle of a mechano-optical lever and that makes possible observation of relative changes of up to 10-6 in the length of a specimen is most commonly used to measure magnetostriction. Electronic and interference methods provide still greater sensitivity. The method of wire-type resistance strain gauges, in which a strain gauge connected to one of the arms of a measuring bridge is glued to the specimen, is also used extensively. The change in the length and resistance of the strain gauge upon a magnetostrictive change in the dimensions of the specimen can be recorded with high precision by an electrical measuring device.

Magnetostriction is widely used in technology. It is the basis for the operation of magnetostriction transformers (sensors) and relays, ultrasonic radiators and receivers, filters and frequency stabilizers in electronic devices, and magnetostriction delay lines.

[mag‚nēd·ō′strik·shən]
(electromagnetism)
The dependence of the state of strain (dimensions) of a ferromagnetic sample on the direction and extent of its magnetization.
McGraw-Hill Dictionary of Scientific & Technical Terms, 6E, Copyright © 2003 by The McGraw-Hill Companies, Inc.

Feedback
Flashcards & Bookmarks ?
Please log in or register to use Flashcards and Bookmarks. You can also log in with
Flashcards ?
My bookmarks ?
+ Add current page to bookmarks
Mentioned in ?
References in periodicals archive ?
of Cary, North Carolina USA, announces that its magnetostrictive Temposonics linear-position sensors are now available with a faster update-rate option that allows for measurements every 100 microseconds.
MTS Systems Corp
Nanometric displacements can be obtained by variation of magnetic flux through magnetostrictive material terfenol-D.
Magnetic circuit of nanometric screw/Nanometrinio sraigto magnetine grandine
The types of smart materials include shape memory alloys, shape memory polymers, electrostrictive, magnetostrictive and piezoelectric materials.
Fascinating fasteners: Telezygology and Textron team up to usher in the new age of point and joint
Under a contract from the Advanced Research program, the Southwest Research Institute in San Antonio, TX, developed a nondestructive inspection system based on the principle of magnetostrictive sensing.
A decade of achievement: now celebrating its 10th year, FHWA's Advanced Research program has produced a host of tangible results ranging from "smart bridges" to detectors that alert drowsy drivers
Much of the new space will be dedicated to manufacturing and testing Balluff Inc.'s lines of inductive proximity sensors and Micropulse magnetostrictive linear position sensors.
Balluff marks 20th year by expanding U.S. HQ. (Presstime Notes)
Their magnetostrictive properties must be tailored to the application and are usually measured by depositing the film on one side of a slender, non- magnetic reed.
NON-DESTRUCTIVE MEASUREMENT OF MAGNETOSTRICTION IN THIN FILMS
Ametek has unveiled its "Series 955, The Brik" accurate, non-contact linear position transducer that uses magnetostrictive technology to give absolute position repeatable to .01% of the sensing distance.
Linear Sensors
Despite contamination and daily high-speed hammering, magnetostrictive linear transducers deliver rapid-fire fun for thousands of visitors
Transducers Put the "Thrill" in Hydraulic-Powered Thrill Rides
* Magnetostrictive substances respond to a magnetic field rather than electric currents.
Bridges with brains, airplanes with feelings: intelligent materials promise high-tech miracles
The imploding phenomenon occurs whether the ultrasonic pressure wave is generated by piezoelectric (PZT) or magnetostrictive (MST) transducers.
An ultrasonic cleaner's prime mover
By including, say, piezoelectric materials (which expand or contract in the presence of electric fields) or so-called magnetostrictive materials (which respond similarly but to magnetic fields), they hope to build autonomous space structures that can reconfigure themselves in response to factors such as age, wear or even the continuous thermal cycle of countless orbital treks in and out of sunlight.
Smart as a brick: scientists strive to make inanimate objects smart
6.2.3.2.5.1 Magnetostrictive Level Transmitter Works Well With Clean Liquids and is Accurate and Adaptable to Wide Variations in Fluid Densities
$95.5Bn Process Automation & Instrumentation Market Analysis by Instrument, Solution, Industry, and Geography (2019-2024)