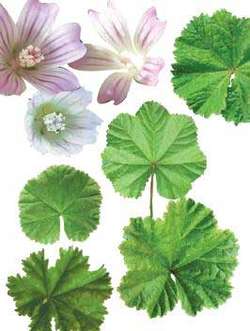 Very common worldwide and highly nutritious. Whole plant is edible. The leaves have a mild, pleasant flavor. Has thickening properties so it can be used as a soup base or thickener of liquid dishes. The root can be used also. Make into a tea to sooth the membranes of the entire digestive system. You can eat them raw or dry the upper part of the plant and make a tea out of it. When it cools, it will gel up a bit because the plan contains mucilage. This gel is a soothing compound that coats mucus membranes and soothes irritated tissues, making it great for throat, sinuses, bronchitis, emphysema. stomach, intestines, colon irritation (irritable bowel, ulcerative colitis), bladder, asthma, etc. It boosts immunity and makes hair curly if you put in hair and let it dry. It softens skin and increases milk flow in nursing mothers. The root can be used as substitute for ginseng. Mallow leaf teas are used in the treatment of renal (kidney) disorders, retention of fluids and conditions of the spleen. You can eat them fresh, put them in salads, dry and powder them and put in smoothies. Make mallow shampoo and lotion by putting mallow leaves in blender with a bit of water, let sit for an hour, strain out the pulp, leaving a jelly-like goo, then add pieces of inner yucca stem, blend again and use as shampoo or skin lotion. Mallow root can be used as a toothbrush by unravelling the end like untwisting the end of rope.
Edible Plant Guide © 2012 Markus Rothkranz
The following article is from The Great Soviet Encyclopedia (1979). It might be outdated or ideologically biased.

any one plant of the genus Malva of the family Malvaceae. It is an annual, biennial, or perennial grass with long-petiolate leaves. The flowers, which are axillary and in small groups, are purple, lilac, pink, or white. The calyx has an epicalyx. The ripened fruit breaks into monospermous segments. There are approximately 40 species, distributed in the temperate and, less commonly, subtropical zones of the northern hemisphere. About 20 species are found in the USSR, primarily near dwellings and in gardens and parks; they also grow as weeds among crops, in deserts, and sometimes in thickets and light forests.

High mallow (Malva sylvestris), dwarf mallow (M. neglecta), M. mauritiana, curled mallow (M. crispa) and other species contain carotene and vitamin C, and their leaves and young shoots are used for food. The flowers and leaves of high mallow, which are rich in mucilage, have been used as a tincture for many years to treat inflammations and irritations of the mucous membrane. A dye for wool and wine is obtained from the flowers. The species M. meluca yields a coarse fiber suitable for making string, twine, and hemp; its seeds contain a semidrying oil. Certain species of mallow yield nectar. Musk mallow (M. moschata), M. mauritiana, and M. alcea are cultivated as ornamentals. Some annual varieties that are used as animal feed are known as fodder mallows. Sometimes one species of hollyhock is called mallow.

Feedback
Flashcards & Bookmarks ?
Please log in or register to use Flashcards and Bookmarks. You can also log in with
Flashcards ?
My bookmarks ?
+ Add current page to bookmarks
Mentioned in ?
References in periodicals archive ?
To determine the effect of storage methods on seed quality of jute mallow seeds in Western Kenya.
Effects of storage methods and seasons on seed quality of jute mallow morphotypes (Corchorus Olitorius) in Siaya and Kakamega Counties, Kenya
The fourth scene (of six paragraphs) has as its focal character The Reverend, as he realizes that the supernatural is involved with Blackland's book that Mallow has taken home.
Anthony Boucher's greatest horror story
Our study supports the need to manage the Peters Mountain mallow with fire.
Fire history and its implications for an endemic fire-dependent herb (Il-iamna corei Sherff.) of the Appalachian mountains
Tree mallow seeds can survive in salt water for up to three weeks, which may explain its spread between the islands.
Puffins victims of a killer plant
The substance sticks to grass, asphalt, concrete, wood, metal, walls and most other surfaces, Mallow said.
Stopping intruders can be a sticky mess: Joint non-lethal program office funds development of Mobility Denial System
Mallow's favorite natural spot is Culvert Cliffs State Park, in Maryland's Culvert County between Prince Frederick and Solomon's Island.
Natural Capital
A Garda spokesman said yesterday: "A man in his mid 20s was arrested in relation to the incident and detained under sect 4 in Mallow Garda station."
Three heroes rescue lorry driver after horror smash
Hannah Sillitoe, Cheshire: This is white musk mallow. There is a pink one too that's just as pretty.
Club question; GARDENING CLUB
Their "gourmet" mallows are made with natural ingredients and come in a variety of flavours and formats, from dippers to munch bars and bags.
Mellow mallows offer touch of daily luxury
THIS summer stunner, known as shrubby mallow, is ideal for the back of the shrub border or as a temporary hedge, growing to around 6ft and producing a profusion of pink flowers from early summer to autumn.
gardening: plant of the week: lavatera
Greencore Group plc (Greencore) announces that it is to consolidate all of its sugar manufacturing at its Mallow site and has closed its Carlow manufacturing facility.
Greencore sticks together
At the time, Ledward, 62, who had moved from Saltwood in Kent to Mallow near Cork, was being investigated by police over dozens of accusations of sexual assaults on women at Kent hospitals.
Claims that disgraced doctor faked death laid to rest