[′märk·ər ‚bē·kən]
(navigation)
A low-power radio beacon transmitting a signal to designate a small area, as an aid to navigation.
McGraw-Hill Dictionary of Scientific & Technical Terms, 6E, Copyright © 2003 by The McGraw-Hill Companies, Inc. 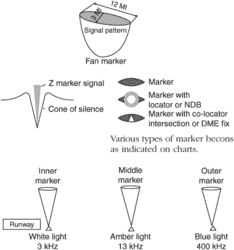 When the aircraft flies over outer, middle, and inner markers, light in color code indicated above flashes. The frequency of audio tone is also indicated in the illustration.
The beacons serve to identify a particular location in space along an airway or an approach to an instrument runway. This is done by means of a 75 MHz transmitter, which transmits a directional signal to aircraft flying overhead. These markers generally are used in conjunction with en route navigational aids and an ILS (instrument landing system) as point designators. The three types of en route markers are fan markers (FM), low-powered fan markers (LFM), and Z markers. They transmit the letter R (.-.) as identification, or if additional markers are in the same area, the letters K, P, X, or Z. Class FMs provide positive identification of positions at definite points along the airway and have a power output of 100 watts. Class LFMs have a rated output of 5 watts, and their antenna arrays produce a circular pattern that appears elongated at right angles to the runway because of the directional characteristics of aircraft receiving the antenna. The station-location, or Z, marker gives a positive position for aircraft operating under instrument flight conditions to show the pilots when they are passing directly over a low-frequency navigational aid. There are three marker beacons: the outer marker, which is sited 4 to 5 NM from the touchdown and transmits two low-pitched dashes per s; the middle marker, which is located ¼ to ½ NM from the touchdown and transmits high-pitched dots and dashes alternately; and the inner marker, which is located at the runway threshold and transmits six high-pitched dots per second. Normally, the inner marker is not installed. The signals from the marker are beamed vertically upward in a fan shape and can be heard in the aircraft only when it is directly above the beacons.
An Illustrated Dictionary of Aviation Copyright © 2005 by The McGraw-Hill Companies, Inc. All rights reserved