Version 6.0 of the Android OS. See Android versions.
Copyright © 1981-2019 by The Computer Language Company Inc. All Rights reserved. THIS DEFINITION IS FOR PERSONAL USE ONLY. All other reproduction is strictly prohibited without permission from the publisher. 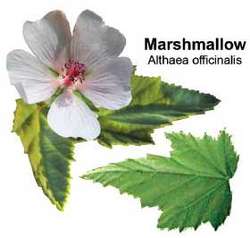 A great skin herb with numerous medicinal benefits, especially in soothing the mucus membranes and respiratory tract. Helps counteract excess stomach acid, peptic ulcers and gastritis. Has laxative properties and soothes irritated or inflamed mucus membranes to help heal intestinal issues like colitis, irritable bowel syndrome, diverticulitis, cystitis and frequent urination. Helps with bronchitis, urinary and digestive system irritations, asthma and inflamed skin, boils, abscesses. Used for all kinds of skin conditions like skin ulcers etc. Soothes sore throat or hoarseness from talking, yelling or singing too much. The leaves can be eaten right off the plant or in salads. The roots are very high in sugar, so diabetics should avoid the root.
Edible Plant Guide © 2012 Markus Rothkranz

Feedback
Flashcards & Bookmarks ?
Please log in or register to use Flashcards and Bookmarks. You can also log in with
Flashcards ?
My bookmarks ?
+ Add current page to bookmarks
Mentioned in ?
References in periodicals archive ?
Why should Washington journalists, who show no mercy when it comes to any other public figure, suddenly go all marshmallowy over a crusty old man with a big wallet and, in recent years, a mediocre football team?
"I thought the Pope had died." (media coverage of the death of Jack Kent Cooke, former owner of the Washington Redskins)
And while Shelden repeatedly cites "interviews" and "conversations" with people who can verify or at least support suspicions of Greene's sneaky dealings, his references provide only the vaguest, most marshmallowy indications of who these people actually are.
The Life of Graham Greene, vol. 2, 1939-1955
I'll admit that my taste panel had a few skeptics who thought Rice Krispies Treat bars would be too dry, or as one panelist so aptly put it, "not gooey marshmallowy enough." But those naysayers are singing a new tune now, and it's in praise of Rice Krispies Treats.
Kellogg gets back on track
"I think it might have been the brandy in the bread and butter pudding which pushed it into first place but my favourite was the queen of puddings as it was so light and almost marshmallowy in texture.
What's for pudding? Nothing beats a good old fashioned pudding to cheer us up on the dullest of days. And if you've got a sweet tooth then the new pudding club launched in Porthcawl could be the dream club for you as Alison Young discovered
"Bright nose, a little sweet with corn, and almost marshmallowy," said Phil Simpson, "this is a pretty nice beer."
Tsingtao Pure Draft
The polar cap of my Alaska had suffered from the effects of global warming and was marshmallowy, not crisp-coated, but my companion's pot de crAme was a delightful mix of bold ice cream and fluffy coffee cream, dusted with chocolate, that brought things to a happy ending.
Gary sets tastebuds a-tremble
The meringue should be crisp and golden on the outside and marshmallowy in the centre.
Amanda Grant's food; Zest of british; Put new life into classic dishes we all love by sprinkling a little Mediterranean sunshine on to UK ingredients
Their marshmallowy taste is far superior to the chalky-tasting specimens you can buy ready-made from supermarkets (am I right or meringue?)
Food Life; Bring out the devil in you