An instrument used for determining the masses of atoms or molecules found in a sample of gas, liquid, or solid. It is analogous to the optical spectroscope, in which a beam of light containing various colors (white light) is sent through a prism to separate it into the spectrum of colors present. In a mass spectroscope, a beam of ions (electrically charged atoms or molecules) is sent through a combination of electric and magnetic fields so arranged that a mass spectrum is produced (see illustration). If the ions fall on a photographic plate which after development shows the mass spectrum, the instrument is called a mass spectrograph; if the spectrum is allowed to sweep across a slit in front of an electrical detector which records the current, it is called a mass spectrometer.

Mass spectroscopes are used in both pure and applied science. Atomic masses can be measured very precisely. Because of the equivalence of mass and energy, knowledge of nuclear structure and binding energy of nuclei is thus gained. The relative abundances of the isotopes in naturally occurring or artificially produced elements can be determined.

Empirical and theoretical studies have led to an understanding of the relation between molecular structure and the relative abundances of the fragments observed when a complex molecule, such as a heavy organic compound, is ionized. When a high-resolution instrument is employed, the masses of the molecular or fragment ions can be determined so accurately that identification of the ion can frequently be made from the mass alone.

Because chemical compounds may have mass spectra as unique as fingerprints, mass spectroscopes are widely used in industries such as oil refineries, where analyses of complex hydrocarbon mixtures are required. See Beta particles 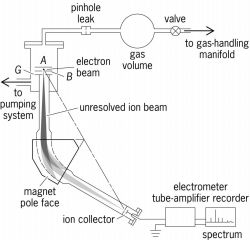 [′mas ′spek·trə‚skōp]
(engineering)
An instrument used for determining the masses of atoms or molecules, in which a beam of ions is sent through a combination of electric and magnetic fields so arranged that the ions are deflected according to their masses.
McGraw-Hill Dictionary of Scientific & Technical Terms, 6E, Copyright © 2003 by The McGraw-Hill Companies, Inc.