[′melt·iŋ]
(nuclear physics)
fusion
McGraw-Hill Dictionary of Scientific & Technical Terms, 6E, Copyright © 2003 by The McGraw-Hill Companies, Inc.
The following article is from The Great Soviet Encyclopedia (1979). It might be outdated or ideologically biased.

(also fusion), the transition of a crystalline solid into the liquid state, accompanied by the absorption of heat. Melting is a phase transition of the first order. The relevant parameters in the melting of pure compounds are the melting point Tm and the heat required to accomplish the melting process—the heat of melting Qm. 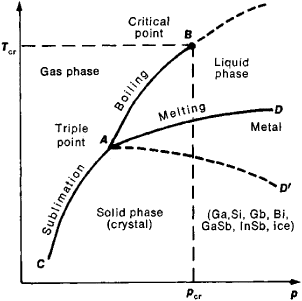 Figure 1 is a phase diagram for a pure substance. The melting point depends on the external pressure p. The phase diagram represents this relationship for a pure substance as the melting curve, along which the solid and liquid phases coexist (AD or AD’ in Figure 1). The melting of alloys and solid solutions usually occurs over a certain temperature range; eutectics, which melt at a fixed point, are an exception. With an alloy, the dependence of temperature on the alloy’s composition at the start and at the end of melting at a given pressure is represented on the phase diagram by special lines, called the liquidus and solidus. In certain macromolecular compounds, for example, those that can form liquid crystals, the transition from the solid, crystalline state to the isotropic, liquid state is a stepwise process that occurs over a certain temperature range; each step corresponds to a discrete stage in the degradation of the crystalline structure. Figure 2. Dependence of temperature rise of a crystalline solid on melting time: (T) temperature, (Tm) melting point. The time τ is proportional to the quantity of heat that is uniformly supplied to the body.

Tungsten, with a melting point of 3410°C, is the highest melting pure metal; mercury is the lowest, melting at — 38.9°C. High-melting refractories include TiN (3200°C), HfN (3580°C), ZrC (3805°C), TaC (4070°C), and HfC (4160°C). Materials with a high melting point usually require a high heat of melting. Impurities lower the melting point of crystalline solids; a practical application of this phenomenon is the preparation of freezing mixtures and low-melting alloys, for example, Wood’s metal, which melts at 68°C.

The nature of the dependence of melting point on pressure is determined by the sign of the volume change, Δ Vm, during melting. Melting of materials is, in most cases, accompanied by an increase in volume; the increase is usually on the order of several percent. Under such conditions, an increase in pressure raises the melting point (see Figure 3). However, some materials, for example, water and certain metals and metalloids, exhibit a decrease in volume during melting (see Figure 1); the melting point of such materials decreases with increasing pressure. 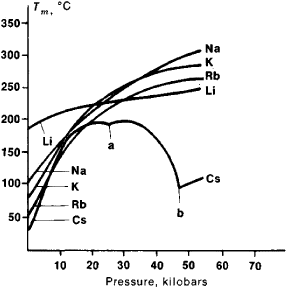 Figure 3. Dependence of melting point Tm on pressure in the alkali metals. The melting curve of Cs reflects the two polymorphic transformations, a and b, of this metal.

Melting is accompanied by changes in the physical properties of a substance. The entropy increases, which reflects the disordering of the crystalline structure. Heat capacity and electrical resistance usually increase, although certain metalloids, for example, Bi and Sb, and semiconductors, such as Ge, possess a higher electrical conductivity in the liquid state than in the solid. Shear strength decreases practically to zero on melting, since transverse elastic waves cannot be propagated in a melt, and the speed of sound propagation decreases, since the speed of propagation of longitidunal waves decreases.

In terms of molecular kinetic theory, melting represents an increase in the amplitude of the vibrational energy of the atoms in a crystal when the heat is supplied to a solid. As the amplitude increases, the temperature of the solid rises and causes various defects within the crystal: unfilled sites, called vacancies, in the crystal lattice can arise, and the periodicity of the lattice can be disturbed by atoms that become inserted intersticially.

If the molecules are not spherical, molecular crystals may exhibit a partial disordering in the mutual orientation of the molecular axes. A gradual increase in and combination of defects characterizes the stage of premelting. Melting begins when the crystal reaches the melting point and a critical concentration of defects in the lattice is reached; at this point, the lattice disintegrates into mobile submicroscopic regions. The heat supplied during melting does not heat the solid body but rather cleaves interatomic bonds and destroys the long-range order of the crystal. The short-range order, however, in the submicroscopic regions does not change substantially during melting; that is, the coordination number in the melt at the melting point is in the majority of cases the same as in the crystal (see COORDINATION NUMBER). The preservation of short-range order in a melt explains why the heat of melting is lower than the heat of vaporization; it also accounts for the relatively small changes in various physical properties of materials during melting.

Important natural melting processes include the melting of snow and ice on the earth’s surface and the melting of minerals within the earth. Melting finds important applications in industry in the production of metals and alloys and in mold casting.

What does it mean when you dream about melting?

Melting ice or snow may suggest a meltdown of frozen emotions that were previously held in check. Molten metal may symbolize a major transformation taking place.

Feedback
Flashcards & Bookmarks ?
Please log in or register to use Flashcards and Bookmarks. You can also log in with
Flashcards ?
My bookmarks ?
+ Add current page to bookmarks
Mentioned in ?
References in periodicals archive ?
The melting process of SSE with grooved melting zone is described in Fig.
Experimental Investigation of the Single Screw Extruder With Grooved Melting Zone
You can try to add more barrel heat to assist melting, or reduce the screw speed to lower the melting requirement.
Overfeeding can cause surges, too
Hydrogen gas can be picked up from the surrounding atmosphere and from products of combustion or exhaust gases during melting. The presence of hydrogen in your melt can lead to detrimental porosity in the casting.
10 ways to improve melting: achieving perfection may be too much to ask from your aluminum melt department, but adhering to the quality procedures and tips listed here can help you close the gap
Determining factor in development of induction systems for melting silicon crystals of different diameters are maximum allowable height of the melt zone and thermal conditions, which ensure reproducibility of the process of growing of non-dislocation single crystals.
Melting of silicon in vertical induction crucible-free zonal melting
Melting curve analysis showed that all H5N1 isolates from the 2004 outbreak in Thailand were interpreted as HPAI, whereas the 3 samples of H5N2 subtype were classified as LPAI.
Discrimination between highly pathogenic and low pathogenic H5 avian influenza a viruses
Sturm is a bit more conservative regarding the runaway melting that's poised to plague the Arctic.
Runaway heat? A darkening Arctic may accelerate warming trends there
Repeat Steps 4 to 9 until each piece of chocolate shows signs of melting. The temperature at which each candy melts is its melting point.
Hands-on science (no lab required)
Kallen introduced the concept in 1916, only eight years after publication of Zangwill's The Melting Pot, determined to challenge that work's premises.
Assimilation, American style
However, when Gregoryanz and his colleagues raised the pressure on solid sodium beyond 30 gigapascals--300,000 times atmospheric pressure at sea level--the metal's melting temperature began to drop.
Metal rebel: under extreme pressure, sodium breaks the rules for turning into liquid
But a melting Arctic ice cap exposes more and more of the dark ocean, which absorbs heat.
The Big Chill
Again referring to figure 3, melting behavior is significantly different for cyclohexane and NR.
Physical properties and their meaning
[USPRwire, Fri Nov 16 2018] A candy melting pot is used for melting candies and chocolates at high temperature in minimum time.
Global Candy Melting Pot Market Insights, Trends & Future Development Status Recorded during 2018-20