(mərĭd`ēən), city (1990 pop. 41,036), seat of Lauderdale co., E Miss., near the Ala. line; settled 1831, inc. 1860. It is an important rail and highway point and the trade and shipping center for a farm, livestock, and timber area. There is also diverse manufacturing. In the Civil War, Meridian was the temporary capital of Mississippi (1863); it was destroyed by General Sherman in Feb., 1864. Meridian Naval Air Station is to the north. Nearby Okatibbee Reservoir offers recreational activities.

A meridian (from the Latin word for “midday”) is formed by taking a line of longitude and projecting it outward from Earth onto the celestial sphere. Another way of imagining a meridian is to picture the circle that would be formed by drawing a line connecting the north pole, the zenith (the point in the sky directly overhead), the south pole, and the nadir (the point directly opposite the zenith). 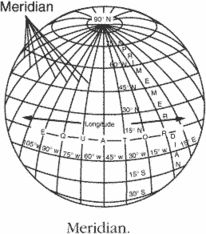 1.
a. one of the imaginary lines joining the north and south poles at right angles to the equator, designated by degrees of longitude from 0? at Greenwich to 180?
b. the great circle running through both poles
2. Astronomy
a. the great circle on the celestial sphere passing through the north and south celestial poles and the zenith and nadir of the observer
b. (as modifier): a meridian instrument
3. Maths a section of a surface of revolution, such as a paraboloid, that contains the axis of revolution
4. (in acupuncture, etc.) any of the channels through which vital energy is believed to circulate round the body
5. Obsolete noon
6. along or relating to a meridian