see atmosphereatmosphere
[Gr.,=sphere of air], the mixture of gases surrounding a celestial body with sufficient gravity to maintain it. Although some details about the atmospheres of other planets and satellites are known, only the earth's atmosphere has been well studied, the science of
..... Click the link for more information. .

the atmospheric layer above the stratosphere, having an altitude from 50–55 to 80 km. It is characteristic of the mesosphere that the temperature decreases with altitude from approximately 0°C at the lower boundary of the layer to -90°C at the upper boundary.

[′mez·ə‚sfir]
(geology)
lower mantle
(meteorology)
The atmospheric shell between about 28-35 and 50-60 miles (45-55 and 80-95 kilometers), extending from the top of the stratosphere to the mesopause; characterized by a temperature that generally decreases with altitude. 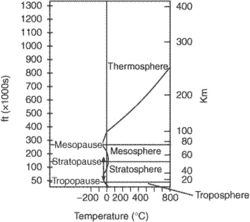 The layer of atmosphere lying above the stratosphere and which extends from approximately 30 to 50 miles (50–80 km) above the sea level. The layer is characterized by a decreasing temperature, which ends at the mesosphere, where the lowest temperatures are encountered in the atmosphere.

Feedback
Flashcards & Bookmarks ?
Please log in or register to use Flashcards and Bookmarks. You can also log in with
Flashcards ?
My bookmarks ?
+ Add current page to bookmarks
TheFreeDictionary presents:
Write what you mean clearly and correctly.
Mentioned in ?
References in periodicals archive ?
It is important to state here that highly varying wave saturation and dissipation processes occurring at mesospheric altitudes may lead this relationship to vary.
(1) Mesospheric airglow data show large variability in the gravity wave amplitudes.
Airglow measurements of gravity wave propagation and damping over Kolhapur (16.5[degrees]N, 74.2[degrees]E)
The satellite observed a second northern season of Polar Mesospheric Clouds (PMCs), which are the Earth's highest clouds.
Satellite observes Earth's highest clouds
Extra-long period (20-40 days) oscillations in the mesospheric and lower thermospheric winds: observations in Canada, Europe and Japan, and considerations of possible solar influences.
En torno a las influencias externas sobre el sistema ionosfera-atmosfera
Gardner's team found that the mesospheric clouds over the South Pole were, on average, at an altitude of 85.5 km at the peak of summer.
Lasers show atmosphere differs from models. (Science News of the week)
2016) and the mesospheric response to such waves (Pautet et al.
THE SOUTH GEORGIA WAVE EXPERIMENT: A Means for Improved Analysis of Gravity Waves and Low-Level Wind Impacts Generated from Mountainous Islands: New observations at South Georgia (an extremely intense source of gravity waves) are used to evaluate model simulations of gravity waves and wakes
Straka III, 2014: Stratospheric and mesospheric concentric gravity waves over tropical cyclone Mahasen: Joint AIRS and VIIRS satellite observations.
TROPICAL CYCLONE CHARACTERIZATION VIA NOCTURNAL LOW-LIGHT VISIBLE ILLUMINATION: Nighttime visible digital data from the Visible Infrared Imaging Radiometer Suite (VIIRS) have the potential to complement the current infrared imagery standard-bearer in monitoring global tropical cyclone characteristics
Data from pressure-modulated infrared sounders [selective chopper radiometer (SCR) and pressure modulator radiometer (PMR); Table 1] and one limb-viewing infrared sounder [stratospheric and mesospheric sounder (SAMS)] were curated by a project funded by the U.K.
Recent advances in satellite data rescue
Vincent, 1987: Mesospheric momentum flux studies at Adelaide, Australia: Observations and a gravity wave/tidal interaction model.
The Deep Propagating Gravity Wave Experiment (DEEPWAVE): an airborne and ground-based exploration of gravity wave propagation and effects from their sources throughout the lower and middle atmosphere: the DEEPWAVE experiment employed extensive airborne and ground-based measurements to provide new insights into gravity wave dynamics
2012), equatorial tropospheric convective activity (e.g., Kodera 2006), polar tropospheric clouds (Kohma and Sato 2014), and mesospheric dynamics and the breakdown and reformation of the stratopause (e.g., Siskind et al.
Defining sudden stratospheric warmings
--, and --, 2005: Uptake of Fe, Na and K atoms on low-temperature ice: Implications for metal atom scavenging in the vicinity of polar mesospheric clouds.
Trigonal ice crystals in earth's atmosphere: ice crystals with threefold symmetry in the atmosphere may not be made of hexagonal ice
In the winter polar vortices, measurements of several additional tracers with production or loss in the mesosphere would allow information about mesospheric influence and mass flux into the stratosphere.
A cost-effective trace gas measurement program for long-term monitoring of the stratospheric circulation: a low-cost, long-term trace gas measurement program having the capability to uniquely monitor key aspects of the stratospheric circulation is proposed