mechanical grinding of wheat or other grains to produce flour. Milling separates the fine, mealy parts of grain from the fibrous bran covering. In prehistoric times grain was crushed between two flat stones. Later a stone with a rounded end was used to grind grain in a cup-shaped stone; this led to the development of the mortar and pestle. The more advanced peoples began to use the quern, a primitive mill in which the grain is placed on a flat, circular lower millstone and ground by revolving a similar upper millstone to which a handle is attached. Such a device, operated at first by hand, was adapted to the use of animal, water, or wind power. The Greeks probably used water power c.450 B.C.; the Romans used gears to connect several sets of millstones with one waterwheel. Windmills are said to have become widespread in Europe following the Crusades and were probably introduced from Asia Minor. The Industrial Revolution initiated the use of steam power and of transportation facilities that resulted in the rise of large-scale milling centers. Machinery was improved, with metal replacing wood and steel rollers replacing millstones. The invention of the middlings purifier, by which, after preliminary grinding, the flour is separated from bran particles by strong air currents, improved the quality of flour prepared from hard spring wheat and, in the United States, led to the development of great milling centers in the spring-wheat areas of Minnesota (notably Minneapolis), the Dakotas, and Montana. In Europe modern rolling methods were developed during the 19th cent. in Hungary, and Budapest became one of the chief milling centers. In modern processing, grain is usually blended, cleaned, scrubbed to remove wheat hairs, tempered by heat and moisture (to prevent brittleness in the bran and consequent pulverization resulting in speckled flour), passed through sets of steel rolls with successively finer corrugations, and sifted after each grinding. It is then blown in a middlings purifier, ground between sets of smooth rolls, and bolted through a very fine mesh sieve. The entire, highly automated process takes about an hour and comprises some 180 operations. The term milling is applied also to the processing of other materials, e.g., soap, textiles, and metals; processing establishments are often called mills, e.g., lumber mill or sawmill, cotton mill, and sugar mill.

In stonework, the processing of quarry blocks, through sawing, planning, turning, and cutting, to produce finished stone.
Illustrated Dictionary of Architecture Copyright © 2012, 2002, 1998 by The McGraw-Hill Companies, Inc. All rights reserved
The following article is from The Great Soviet Encyclopedia (1979). It might be outdated or ideologically biased.

in metalworking, the process of cutting metals and other solid materials with a milling cutter. Milling is used to work flat and shaped surfaces (including threaded surfaces, gear wheels, and worm gears) and is done on milling machines. Figure 1 illustrates milling with a cylindrical plain cutter. 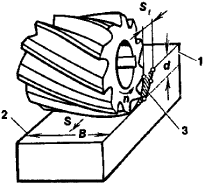 Figure 1. Milling with a cylindrical plain cutter: (1) surface about to be worked, (2) surface already worked, (3) surface being cut

There are two possible milling formats—against the feed (up, or conventional, milling), in which the velocity vectors of cutting and feed are opposite at the lowest point of contact between the cutter and workpiece (Figure 2,a), and with the feed (down, or climb, milling), in which the vectors coincide (Figure 2,b); amax is the maximum thickness of the layer of metal being cut away, and Ψ is the angle of contact of the cutter. Down milling is usually used for rough milling and up milling for finishing. The area of the cross section of the layer of metal being cut away by the tooth of the cutter changes at each moment in the cutting process, and consequently the forces acting on the tooth also change. Even milling can be achieved by using milling cutters with helical teeth, which produce a relatively constant cross-sectional area of the metal layer being cut away.

Figure 2. Milling methods: (a) up milling, (b) down milling

The primary production time for milling follows the formula Tp = (L/S)i min, where L is the total length of passage of the workpiece in mm relative to the cutter in the direction of feed, and i is the number of passes. The allowable cutting speed depends on the type of cutter, the material and geometric parameters of the cutting element and other components, the cutting format, the condition of the surface layer of the workpiece, and other factors.

Forces of resistance to cutting arise during milling. The torsional moment on the spindle of the milling machine may be determined by the circumferential force. An axial force acts on the spindle bearing, the device used to hold the workpiece, and the parts and subassemblies of the feed mechanism. A radial force acts on the supports of the spindle on the arbor to which the cutter is attached. A horizontal force is applied to the feed mechanism and the device used to hold the workpiece.

In woodworking, milling may also be done with rough planers and thickness planers equipped with bladed shafts or heads with inserted blades.

[′mil·iŋ]
(mechanical engineering)
Mechanical treatment of materials to produce a powder, to change the size or shape of metal powder particles, or to coat one powder mixture with another.
(mining engineering)
A combination of open-cut and underground mining, wherein the ore is mined in open cut and handled underground.
McGraw-Hill Dictionary of Scientific & Technical Terms, 6E, Copyright © 2003 by The McGraw-Hill Companies, Inc.

1. In stonework, the processing of quarry blocks, through sawing, planing, turning, and cutting techniques, to finished stone.
2. In metalwork, the process of dressing a surface with various shapes of rotary cutters to produce a flat or grooved surface.
3.See knurling.
McGraw-Hill Dictionary of Architecture and Construction. Copyright © 2003 by McGraw-Hill Companies, Inc.