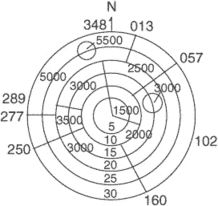 The lowest altitude, expressed in feet AMSL (above mean sea level), to which a radar controller may vector aircraft, except as other-wise authorized for radar approaches, departures, and missed approaches. MVAs are established for use by ATC (air traffic control) when radar ATC is exercised. MVA charts are prepared by air traffic facilities at locations where there are numerous different minimum altitudes. Each MVA chart has sectors large enough to accommodate the vectoring of aircraft within the sector at the MVA. Each sector boundary is at least 3 miles from the obstruction determining the MVA. To avoid a large sector with an excessively high MVA because of an isolated prominent obstruction, the obstruction may be enclosed in a buffer area whose boundaries are at least 3 miles from the obstruction. This is done to facilitate vectoring around the obstruction. The minimum vectoring altitude in each sector provides 1000 ft above the highest obstruction in nonmountainous areas and 2000 ft above the highest obstacle in designated mountainous areas. The MVA is the lowest altitude that meets obstacle clearance requirements in the airspace specified.

Feedback
Flashcards & Bookmarks ?
Please log in or register to use Flashcards and Bookmarks. You can also log in with
Flashcards ?
My bookmarks ?
+ Add current page to bookmarks
TheFreeDictionary presents:
Write what you mean clearly and correctly.
Mentioned in ?
References in periodicals archive ?
The controller realized what had happened, and asked the aircraft, "Aircraft X, verify heading 200." The aircraft responded, "Negative, we are heading 297 direct ZZZ." The controller then asked if the aircraft could maintain its own terrain and obstacle clearance, because he was now in an area with a 3700 feet minimum vectoring altitude. The pilot responded, "Affirmative." The aircraft was then issued its clearance and after reaching 3700 feet was cleared as filed.
How we goof with ATC
When off airways, ATC will issue clearances and permit direct routings only if the airplane is in radar contact and the airplane is at or above the minimum vectoring altitude (MVA), the lowest altitude where controllers have reliable radar coverage.
Non-radar IFR: once you're off the beaten path, ATC can't see you or provide the services--like obstacle clearance--we've taken for granted. They're now your responsibility
In the U.S., controllers keep pilots away from obstacles using minimum vectoring altitudes (MVA, used mainly by approach controls) or minimum instrument altitudes (MIA, used by centers).
CFIT on departure
Controllers may be aware of some of those for their airspace, but the one they're most keenly familiar with is the MVA, or Minimum Vectoring Altitude. I mentioned it briefly before, but what is it exactly?
This way or that-a-way
The pilot was asked to confirm he was in VMC and ATC advised the minimum vectoring altitude for the area was 5500 feet msl.
Rockwell international 690B
The MVA is the Minimum Vectoring Altitude for TRACON controllers.
Departures revisited: all departure procedures, regardless of type, help us safely depart an airport on our way to the safety of the enroute structure. but, there are limitations you should know
Minimum Vectoring Altitude (MVA) is the lowest MSL altitude where air traffic controllers can be reliably expected to have all aircraft visible on radar in a given local area.
Departing non-towered airports: when there's no charted departure procedure and the weather's down the tubes, use these tips to do it on your own
At this point, a pilot flying a VCOA procedure would probably be on top of the airport skirting the bases of the clouds, probably below the minimum vectoring altitude and nowhere near an airway.
Vcoa Basics: Are visual climb over airport (VCOA) procedures the wild west of instrument flying, or just a misunderstood maneuver stuck between visual and instrument flight? Yes, they are
In cases where you're flying in a radar environment, ATC may be able to descend you down to what's called a minimum vectoring altitude, which can be lower.
Alternates made easy: When the weather's bad, choosing an alternate airport can be a tricky balance of time, distance, fuel and minimums. It doesn't have to be so hard
After we locate the pilot's IFR flight plan, we then ensure that he's at a safe IFR altitude by verifying he's above our minimum vectoring altitude (MVA) or asking him "Can you maintain your own terrain and obstruction clearance?" from his present altitude up to our MVA.
More than one way: Snagging an IFR clearance at a nontowered airport isn't a big deal, especially when you know the variety of ways to make it happen
Normally, the intermediate segment is at least five miles long, but it can be cut down to three, and if the ceiling isn't lower than 500 feet above the minimum vectoring altitude and the visibility at the airport (or from a Pirep) is at least three miles, it can be even less.
Spoonfeeding the final: getting a vector to the final approach course is the norm at most airports, not the exception. But there are still a few things you need to know
I was cleared to descend to 12,500 feet, the minimum vectoring altitude in that area.
Turbo failure! When a turbo fails, it's time for some quick thinking and a turn toward the nearest suitable airport. Here's one incident that worked out