The use of plane or curved reflecting surfaces for the purpose of reverting, directing, or forming images. An optical surface which specularly reflects the largest fraction of the incident light is called a reflecting surface. Such surfaces are commonly fabricated by polishing of glass, metal, or plastic substrates, and then coating the surface of the substrate with a thin layer of metal, which may be covered in addition by a single or multiple layers of thin dielectric films. The law of reflection states that the incident and reflected rays will lie in the plane containing the local normal to the reflecting surface and that the angle of the reflected ray from the normal will be equal to the angle of the incident ray from the normal. See Geometrical optics

The formation of images in the plane mirrors is easily understood by applying the law of reflection. The illustration shows the formation of the image of a point formed by a plane mirror. Each of the reflected rays appears to come from a point image located a distance behind the mirror equal to the distance of the object point in front of the mirror. The face of the observer can be considered as a set of points, each of which is imaged by the plane mirror. Since the observer is viewing the facial image from the object side of the mirror, the face will appear to be reversed left for right in the virtual image formed by the mirror. The illustration also indicates the redirection of light by a plane mirror, in that a viewer who cannot observe the object point directly can observe the virtual image of the point formed by the mirror. A simple optical device which is based on this principle is the simple mirror periscope, which uses two mirrors to permit viewing of scenes around an obstacle. 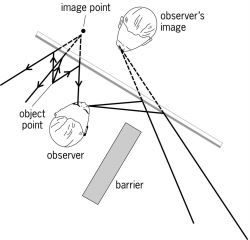 Formation of images by a plane mirror

A curved mirror, either spherical or conic in form, will produce a real or virtual image in much the same manner as a lens, but generally with reduced aberrations. There will be no chromatic aberrations since the law of reflection is independent of the color or wavelength of the incident light. See Aberration (optics), Optical image

A spherical mirror will form an image which is not perfect, except for particular conjugate distances. The use of a mirror which has the shape of a rotated conic section, such as a parabola, ellipsoid, or hyperboloid, will form a perfect image for a particular set of object-image conjugate distances and will have reduced aberrations for some range of conjugate relations. The most familiar applications for conic mirrors are in reflecting telescopes. See Optical prism, Optical surfaces, Reflection of electromagnetic radiation, Telescope

[′mir·ər ′äp·tiks]
(optics)
The science and technology of mirrors which, by means of reflecting rays of light, either revert optical bundles or focus them to form images.
McGraw-Hill Dictionary of Scientific & Technical Terms, 6E, Copyright © 2003 by The McGraw-Hill Companies, Inc.

Feedback
Flashcards & Bookmarks ?
Please log in or register to use Flashcards and Bookmarks. You can also log in with
Flashcards ?
My bookmarks ?
+ Add current page to bookmarks
Mentioned in ?
References in periodicals archive ?
It includes information on mirror optics, index lenses, depth perception, smart displays, compressive displays and focus synthesis, on-axis displays, waveguide displays, diffractive optics, pinlight, and contact-lens supported near-eye displays; more on temporal resolution with 2D and 3D displays and 3D recording and multi-viewer auto-stereoscopic displays; and a new appendix on calibration.
Displays: Fundamentals & Applications, 2nd Edition
In addition, precision mirror optics eliminate chromatic aberrations.
On the spot: two new spot pyrometers from Ametek Land make temperature measurement easy
Damage to extreme ultraviolet (EUV) and x-ray mirror optics due to carbon deposition in vacuum systems is a well-known effect (1).
Method for the characterization of extreme-ultraviolet photoresist outgassing
According to the principles of mirror optics, the reflected landscape appears as if viewed from a different vantage point or as though the observer's eyes were below the surface of the water.
Girls on the Pier: Reflections on Edvard Munch's
Its kid-friendly design (a durable plastic body and base) and 76mm precision mirror optics are perfect for both night-viewing of the sky and day-viewing of Mother Nature.
Celestial skies. (What's New?)
The Eye-Trek uses a "free-shaped prism" that produces superior brightness and is lighter than units using concave mirror optics. The FMDs weigh less than four ounces and can even be worn over glasses.
A Room of Your Own
In compliance with the standard for this laser power class, the welding optics consist of mirror optics with a parabola focusing mirror.
Laser welding alternative for joining exhaust systems