see cellcell,
in biology, the unit of structure and function of which all plants and animals are composed. The cell is the smallest unit in the living organism that is capable of integrating the essential life processes. There are many unicellular organisms, e.g.
..... Click the link for more information. .
The Columbia Electronic Encyclopedia™ Copyright © 2013, Columbia University Press. Licensed from Columbia University Press. All rights reserved. www.cc.columbia.edu/cu/cup/

Specialized organelles of all eukaryotic cells that use oxygen (see illustration). Often called the powerhouses of the cell, mitochondria are responsible for energy generation by the process of oxidative phosphorylation. In this process, electrons produced during the oxidation of simple organic compounds are passed along a chain of four membrane-bound enzymes (the electron transport or respiratory chain), finally reacting with and reducing molecular oxygen to water. The movement of the electrons releases energy that is used to build a gradient of protons across the membrane in which the electron transport chain is situated. Like a stream of water that drives the turbines in a hydroelectric plant, these protons flow back through adenosine triphosphate (ATP) synthase, a membrane-bound enzyme that acts as a molecular turbine. Rotation of part of ATP synthase results in storage of energy in the form of ATP, the universal energy currency of the cell. 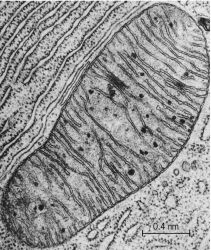 Electron micrograph of a thin section through the pancreas of a bat, showing a typical mitochondrion in profile

Besides their role in energy generation, mitochondria house numerous enzymes that carry out steps essential to metabolism. Defects in mitochondrial assembly or function generally have serious consequences for survival of the cell. In humans, mitochondrial dysfunction is the underlying cause of a wide range of degenerative diseases, with energy-demanding cells such as those of the central nervous and endocrine systems, heart, muscle, and kidney being most severely affected.

Mitochondria are bounded by two concentric membranes referred to as the outer and the inner. This creates two distinct compartments, the matrix and the intermembrane space. The outer membrane consists of a bilayer containing about 80% lipid. It is freely permeable to molecules smaller than about 5000 daltons. The inner membrane is also a lipid bilayer. It is extremely rich in protein (about 75%) and is impermeable to even the smallest of ions. The inner membrane contains the enzymes of the electron transport chain and the ATP synthase, together with a set of transporter proteins that regulate the movement of metabolites in and out of the matrix space. Mitochondria of cells that depend on a high level of ATP production are usually extensively folded to produce structures called cristae (see illustration). These greatly increase the surface area of the inner membrane, allowing many more copies of the enzymes of oxidative phosphorylation.

The intermembrane space contains enzymes capable of using some of the ATP that is transported out of the matrix to phosphorylate other nucleotides. The matrix space is packed with a hundred or so water-soluble proteins that form a sort of semisolid gel. They include enzymes of the tricarboxylic acid (Krebs) cycle and enzymes required for the oxidation of pyruvate and fatty acids, comprising steps in the biosynthesis or degradation of amino acids, nucleotides, and steroids.

Both mitochondria and chloroplasts contain DNA and the machinery necessary to express the information stored there. In both cases, the DNAs are relatively small and simple compared with DNA in the nucleus. While chloroplast DNA tends to be very similar in size in all organisms examined, mtDNA varies widely in complexity, from 16–18 kilobases in metazoa to upward of 2000 kilobases in some higher plants. In the case of higher-plant mtDNAs, some extra sequences appear to have been picked up from chloroplast and nuclear DNAs. MtDNA is generally circular, although some linear exceptions are known among the yeasts, algae, and protozoa.

The information content of most mtDNA is limited. This means that most of the several hundred proteins found in these organelles are encoded by genes located in nuclear DNA. These proteins are synthesized in the cytosol and subsequently transported specifically to the respective organelles. The contributions of the two genetic systems are usually closely coordinated, so that cells synthesize organelles of more or less constant composition.

Recent years have seen a growing interest in human diseases that result from mitochondrial dysfunction. A number of these result from mutations in mtDNA. Others are linked to nuclear genes, whose mutation disturbs oxidative phosphorylation or impairs mitochondrial assembly. Mutations in mtDNA are remarkably frequent and lead to a wide range of degenerative, mainly neuromuscular diseases. Most of these diseases are maternally inherited, but some appear to be spontaneous, possibly resulting from error-prone replication of mtDNA. A striking feature of mtDNA-related diseases is the enormous diversity in clinical presentation. This diversity is attributable to two main factors: (1) Heterogeneity in the mtDNA population. Most human tissues contain many thousands of mtDNA molecules per cell. The severity of clinical symptoms depends on the number of mutated molecules present. (2) Dependence of a particular cell type on mitochondrial function (mainly ATP production). Cells with a high requirement for mitochondrially generated ATP are more severely affected than cells with alternative sources of ATP.

Besides their role in metabolism and energy-linked processes, mitochondria have recently been identified as important players in the initiation of apoptosis (programmed cell death). On one hand, the mitochondrial outer membrane houses a number of members of the Bcl-2 family of apoptosis regulatory proteins. On the other hand, release of certain mitochondrial proteins from the intermembrane space is instrumental in activating specialized proteases called caspases. These catalyze a degradative cascade in the cytoplasm that eventually ends in cell death.

Mammalian mtDNAs accumulate mutations at high rates and evolve correspondingly fast (up to 12–15 times faster than single-copy genes in nuclear DNA and up to 100 times faster for rRNA and tRNA genes). This behavior reflects both a high incidence of mutations and a high probability of their fixation. The first is probably related to oxidative damage to mtDNA by oxygen free radicals produced as by-products of electron transfer through the respiratory chain. The second has been attributed to the lack of efficient DNA repair (mitochondria lack nucleotide-excision repair) and to a relatively high tolerance of many mitochondrial gene products to mutational change.

The rapid rate of sequence evolution of mammalian mtDNAs makes these genomes highly sensitive indicators of recent evolutionary relationships. Unlike their nuclear counterparts, mtDNAs do not undergo recombination during sexual transmission and are strictly maternally inherited. Sequence changes in mtDNA therefore provide a clear record of the history of the female lineages through which this DNA has been transmitted.

(chondriosomes), organelles found in most animal and plant cells. Mitochondria are responsible for cell respiration and the release or storage of energy in a readily usable form. They are absent only in bacteria, blue-green algae, and other procaryotes, in which the cell membrane performs their functions.

Mitochondria are usually concentrated in functionally active zones of the cell. They are round, rod-shaped, or barbell-shaped bodies about 0.5–1.5 microns in diameter. Their shape, number, size, and functional condition change depending on the cell’s environment, its physiological activity, and various pathological processes. The number of mitochondria also varies with the type of cell. For example, a rat liver cell contains about 2,500. Mitochondria are also particularly abundant in functionally very active cells, such as spinal cord motoneurons and skeletal muscle cells. In liver cells the biological half-life of mitochondria (the period during which half their contents is renewed) is 9.6–10.2 days, and in kidney cells, 12.4 days. During the life of the cell the number of mitochondria usually increases, apparently as a result of their division.

All mitochondria have basically the same internal structure. Electron microscope examination shows that the basic substance or matrix is surrounded by a double membrane: a smooth outer one and an inner one that forms involutions called cristae. Most of the enzymes that catalyze oxidation and phosphorylation are concentrated in the mitochondrial membranes, which consist of complexes of proteins and lipids organized in discrete subunits. The outer and inner membranes differ in their content of certain lipids and in their sets of enzymes. For example, the enzyme complexes responsible for electron transfer and oxidative phosphorylation are concentrated in the inner membrane. The enzymes that oxidize monoamines, as well as some of the enzymes involved in fatty acid metabolism, are found in the outer membrane. The matrix contains the enzymes involved in the tricarboxylic acid cycle and the oxidation of fatty acids. The enzyme adenylate kinase, which catalyzes the reversible phosphate transfer from adenosine triphosphoric acid (ATP) to adenosine monophosphoric acid (AMP), is concentrated in the space between the outer and inner membranes.

According to contemporary science, mitochondria are endosymbionts of a cell that has a formed nucleus. They may have originated as a result of the infection of primitive cells with aerobic bacteria-like organisms which subsequently adapted to intracellular existence and assumed the function of respiration.

Feedback
Flashcards & Bookmarks ?
Please log in or register to use Flashcards and Bookmarks. You can also log in with
Flashcards ?
My bookmarks ?
+ Add current page to bookmarks
Mentioned in ?
References in periodicals archive ?
Finally, when dysfunctional mitochondria are not producing optimum energy they go into low energy state called 'hibernation' or 'cell danger response mode' wherein ATPs are not formed through the normal process of electron transport chain.
Mitochondria and our health
converged on the mitochondria as the center of cellular aging, giving
The Mitochondrial Theory of Aging
The researchers hypothesized that the reason the mitochondria of iNs were more impacted by aging than the mitochondria of skin cells was that neurons rely more heavily on mitochondria for their energy needs.
Energy Production Deficit Affects Brain
MitoQ is an exciting advance in antioxidant technology because it attaches a positive charge to the antioxidant part of coenzyme QIO (the mitochondria's own natural antioxidant).
HEALTH BENEFITS OF MITOQ ANTIOXIDANT TECHNOLOGY
The membrane potential was measured in the isolated mitochondria by monitoring changes in the fluorescence of the cationic dye Rhodamine 123, for which fluorescence is quenched as a result of mitochondrial accumulation of the dye [14, 15].
Leptin Modifies the Rat Heart Performance Associated with Mitochondrial Dysfunction Independently of Its Prohypertrophic Effects
So, it appears that healthy mitochondria are critical for our oral health, for our cells' health, and for our existence.
Bacteria, Gum Disease, and Mitochondria: Healthy mitochondria rely on healthy gums
Understanding of mitochondrial malfunctioning in various pathological conditions, genomic background and molecular mechanisms may provide new therapeutic approaches for prevention of diseases associated with the defected function of mitochondria.
IN SITU ANALYSIS OF MITOCHONDRIAL RESPIRATORY CAPACITY --FOUNDATION FOR CELLULAR PHYSIOLOGY/IN SITU ANALIZA MITOHONDRIJALNOG RESPIRATORNOG KAPACITETA --OKOSNICA BUDUCIH ISTRAZIVANJA IZ CELIJSKE FIZIOLOGIJE
The authors discuss the role of mitochondria in the epigenetic modifications on chromatin and highlight the impact of hydrogen peroxide, an important by-product of mitochondrial respiration.
Mitochondria: More than Just "Power Plants" in Stem Cells
After that time, kidney tissue was used for isolation of mitochondria.
Caffeic Acid Phenethyl Ester Reduces Ischemia-Induced Kidney Mitochondrial Injury in Rats
Total RNA was isolated from heart tissues or mitochondria using Trizol reagent (Invitrogen) and treated with RNase-free DNase I for 1h.
Mitochondria Associated MicroRNA Expression Profiling of Heart Failure
Mitochondria are the powerhouse of a cell and provide energy through respiration, and play a crucial part in this process.
The role of mitochondria in determining stem cell fate
Two strains of mice--genetically identical except for the source of their mitochondria, the energy centers of cells--aged very differently, researchers report online July 6 in Nature.
Donor mitochondria could alter aging: mouse DNA study may have implications for 3-parent babies