[′mäj·ə‚lād·ər]
(electronics)
The transmitter stage that supplies the modulating signal to the modulated amplifier stage or that triggers the modulated amplifier stage to produce pulses at desired instants as in radar.
A device that produces modulation by any means, such as by virtue of a nonlinear characteristic or by controlling some circuit quantity in accordance with the waveform of a modulating signal.
One of the electrodes of a spacistor.

(in electronics and telecommunications), a device that produces modulation (control of the parameters of a high-frequency electromagnetic information carrier in accordance with electrical signals of the transmitted message). A modulator is mainly a component of transmitting apparatus for electrical communication and radio broadcasting. The information carrier is usually harmonic oscillations or waves at a frequency of about 104−1015 hertz (which is called the carrier or subcarrier frequency).

A distinction is made among amplitude, frequency, phase, and complex modulation (for example, in single-sideband transmission), depending on the parameter of the harmonic oscillations or waves that is varied; the type of modulator is classified accordingly. In pulse-code modulation the information carrier is a regular sequence of electrical pulses whose parameters (amplitude, width, frequency, or phase of the repetitions) are controlled by corresponding types of pulse modulators. The modulating electrical signals of the message being transmitted may have very different forms: from simple, slow telegraph dispatches in the form of dots and dashes or oscillations in the audio-frequency range for the transmission of speech and music to the complicated, rapidly varying signals that are used in television or multichannel wire and radio-relay communications. Amplification of the modulating oscillations is often included in the function of the modulator.

A necessary requirement for modulation is that the modulating oscillation must vary with time much more slowly than the modulated oscillation. Consequently, in any modulator the interacting circuits of the modulated oscillations or waves are combined with circuits for the lower-frequency modulating signal. The determining element in a modulator is the control element, which permits a signal to act on the parameters of the modulated oscillations or waves. As of 1974 the electron tube as a universal control element had been retained mainly as a modulator in high-power radio transmitting apparatus (“modulator tubes” were especially developed for this purpose). For transmitter powers of up to 0.5 kilowatt, tubes have been successfully superseded by transistors and other semiconductor devices. In addition to semiconductor devices, klystrons and traveling-wave tubes are also used in apparatus operating at superhigh frequencies. (For information on modulators for the optical wavelength range, see.)

In amplitude modulation, the modulator varies the amplitude

Figure 1. Transistor amplitude modulators: (a) base modulator; (b) collector modulator; (um) voltage of the modulated oscillations; (Tr) low-frequency transformer; (C1), (C2), and (L1) capacitors and inductance coil, respectively, of the high- and low-frequency decoupling circuits; (R) and (R1) resistors in a DC voltage divider of the transistor supply circuit; (ec) voltage supplied to the collector of the transistor. The transistor T, together with the resonance circuit composed of the inductance coil L and the capacitor C1 constitutes a controlled amplifier of the carrier-frequency oscillations, whose gain varies with a change in um.

In frequency and phase modulation the control elements used in the modulators are reactive devices, in which the effective capacitance or inductance (or both) is varied by the action of the modulating signal. The reactive device is connected directly to the resonance circuit of the driving oscillator or to subsequent phase-shifting circuits of the radio transmitter. In tube modulators such a device is called a reactance tube; in transistor modulators it is called a reactance transistor. In addition, the phenomenon of phase shift in the generated oscillations, which under certain operating conditions depends on the value of the DC collector current, is used in some transistorized phase and frequency modulators. Extensive use is made of varicaps as the reactive control element in modulators (Figure 2). 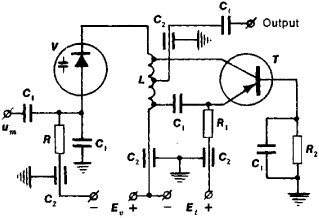 Figure 2. Frequency modulator with a varicap: (V) varicap, which with an inductance coil L forms the resonance circuit of an oscillator using transistor T; (Er) and (E1) voltages supplied to the varicap and transistor, respectively; (C1) and (C2) decoupling capacitors; (R), (R1), and (R2) resistors in the decoupling circuits. The effective capacitance of the varicap is controlled by the modulating voltage um.

In pulse modulation the modulator control element may also be an electron tube or a semiconductor device such as a varicap (Figure 3), which cuts off or opens a microwave channel in accordance with the sign of the modulating pulse trains.

A modulator is sometimes part of amplifiers operating in various frequency ranges, from audio frequencies to superhigh frequencies. A magnetic amplifier has a modulator in the form of a DC saturable reactor, whose inductance is controlled by the current of the amplified signal. In this case it is alternating current of commercial frequency, which is higher than the spectrum of the signals (usually the commands of automatic systems), that is usually being modulated. In a dielectric amplifier the modulator is a nonlinear capacitor that controls the signal voltage by means of its capacitance. A modulator is also a component of some parametric amplifiers.

Any device or circuit by means of which a desired signal is impressed upon a higher-frequency periodic wave known as a carrier. The process is called modulation. The modulator may vary the amplitude, frequency, or phase of the carrier.

The frequency modulator usually changes the effective capacitance or inductance in the frequency-determining LC circuit of the oscillator. However, other techniques can be used. For example, a multivibrator can be used to generate carrier frequencies up to a few megahertz, and the multivibrator frequency can be modulated by controlling the base, gate, or grid bias supply voltage. See Frequency modulator

A unit in which audio or digital signals modulate the carrier waves by varying the amplitude (amplitude modulation) or the frequency (frequency modulation). The signals from the modulator are fed for further amplification to the power amplifier in a simple transmitter.

Feedback
Flashcards & Bookmarks ?
Please log in or register to use Flashcards and Bookmarks. You can also log in with
Flashcards ?
My bookmarks ?
+ Add current page to bookmarks
TheFreeDictionary presents:
Write what you mean clearly and correctly.
Mentioned in ?
References in periodicals archive ?
By combining gene regulation obtained from coexpression data and ceRNAs, we report here an early attempt to unify two systems mathematically while assuming a known modulator, estrogen receptor (ER).
Gene regulation, modulation, and their applications in gene expression data analysis
The transfer function of the modulator can be derived as (1) with the quantizer replaced by its linear model,
A 0.6-V to 1-V audio as modulator in 65 nm CMOS with 90.2 dB SNDR at 0.6-V
(2) Optical modulator: An optical component that converts electrical signals to optical signals.
Fujitsu Laboratories Develops Integrated Silicon Optical Transmitter to Carry Large Volumes of Data between CPUs
Many natural materials inherently do not respond to THz radiation, and many devices operating in this frequency range, such as sources, switches, modulators and detectors, are limited.
Terahertz metamaterial modulators based on absorption
Leading players in the global electro-optic modulators market include Brimrose Corporation of America, APE Angewandte Physik and Elektronik GmbH, Gooch & Housego plc, Photon LaserOptic GmbH, Newport Corporation, Inrad Optics Inc., GLEAM Optics, QUBIG GmbH, Conoptics Inc., and Thorlabs Inc.
Electro-optic Modulators Market 2019 - 2023: Company Profiles, Global Segments, Emerging Technologies, Business Trends, Size, Landscape and Demand
The first piece aimed at solving this problem was the publication [2] concerning the contactless excitation system of ASG on the basis of a cascade three-phase three-phase--voltage modulator in the circuit of two stars (when each of the phases of the rotor winding of the generator is split into two branches, and the 6 branches thus formed are connected in two separate three-phase stars).
REGULARITIES OF ELECTROMAGNETIC PROCESSES OF A CONTACTLESS EXCITATION SYSTEM OF AN ASYNCHRONIZED GENERATOR BASED ON A CASCADE THREE-PHASE-THREE-PHASE VOLTAGE MODULATOR IN A SINGLE-STAR CIRCUIT
Zhang, "Double-layer graphene optical modulator," Nano Letters, vol.
Progress on Waveguide-Integrated Graphene Optoelectronics
Figure 2 shows the launch and received spectra of 10Gb/s optical OFDM signal over 5 km MMF link using an optical I/Q modulator and a direct one.
Extended Reach 10 Gb/s Transmission with an Optical I/Q Modulator Using VCSELs over OFDM-Based Multimode Fiber Link
The directly modulated signal was given to the photo-detector without using external modulator. Both the experiments are compared to infer that the external modulation technique is better than the direct modulated technique based on its high bit rate performance.
Optical millimeter wave generation using external modulation--a review
An alternative configuration based on nonlinear effect of intensity and phase modulators was implemented to generate OFC [9-11].
Broadband Enhancement of Optical Frequency Comb Using Cascaded Four-Wave Mixing in Photonic Crystal Fiber
According to Figure 5, the four parameters of this modulator are simply recognized, namely, [k.sub.m], [U.sub.on], [U.sub.off], and [T.sub.m] x [k.sub.m], indicating the gain of the filter, and [T.sub.m] is the time constant of the filter.
Designing a Control System for an Airplane Wing Flutter Employing Gas Actuators
The rest of this paper is organized as follows: in Section 2, a generalized structure of Sigma-Delta modulator is introduced; in Section 3, the proposed fractional-order Sigma-Delta modulator is discussed; then PSO algorithm for fractional-order Sigma-Delta modulator is presented in Section 4.
A Novel Sigma-Delta Modulator with Fractional-Order Digital Loop Integrator