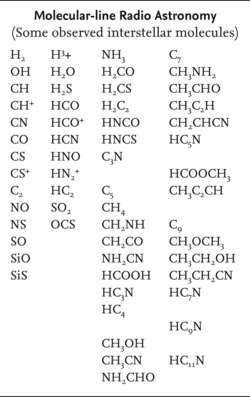 The study of celestial regions containing molecules by means of the radio emissions from the molecules themselves; unlike optical emissions, radio emissions are not obscured by material in the interstellar medium. A radio telescope using a line receiver is best suited to the purpose. Many different molecules have now been detected in the Galaxy in molecular clouds. The first interstellar molecules – CH, CH+, and CN – were detected optically in the late 1930s. This list has been greatly extended by radio astronomy measurements (see table). Most of the molecules are organic, i.e. based on carbon, but some inorganic species, such as silicon oxide (SiO), have also been detected. Many molecules occur in different isotopic forms, e.g. with deuterium rather than hydrogen.

The radio emissions usually come from transitions between different rotational states of the molecule and have wavelengths normally in the submillimeter and millimeter range, i.e. they lie in the gigahertz region of the radio spectrum. Some clouds of molecules appear to emit by maser action (see maser source); for example, the OH line at 1.665 gigahertz in some radio sources is observed to be very narrow and highly polarized: characteristic features of a maser. Molecular-line radio astronomy is especially useful in determining cosmic isotope ratios.