The coexistence of two or more genetically distinct cell populations derived originally from a single zygote. Mosaics may arise at any stage of development, from the two-cell stage onward, or in any tissue which actively proliferates thereafter. The phenomenon is commonly observed in many species of animals and plants and may be caused by somatic mutation or chromosomal nondisjunction. An individual animal or plant may exhibit mosaicism, or it may occur in a culture of a single cell- or tissue-type obtained from an individual.

Chromosome nondisjunction is probably the principal cause of chromosomal aberration, which in turn may lead to the development of mosaicism. During cell division, the two sister chromatids usually separate completely, each chromatid going to opposite poles of the cell guided by the spindle apparatus. In some cases, one chromatid will fail to completely separate, or it may lag behind. This nondisjunction will lead to the presence of both sister chromatids in the same daughter cell instead of one in each of the daughter cells (Fig. 1). Somatic crossing-over leads to the production of a recombinant mosaic where chromosome segments, with their corresponding blocks of genes, are exchanged between homologous chromosomes during mitosis. The occurrence of this process leads to mosaicism, mostly manifested as spots (clones of variant cells) on the cuticle of insects or on leaves, petals, or stamen hairs. See Chromosome 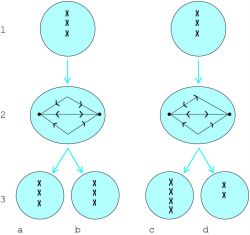 Sex chromosome mosaicism, the presence of a mixture of cell populations with different X and Y chromosome constitutions, is not uncommon and is often seen in individuals with ovarian dysgenesis. The presence of a significant proportion of chromosomally abnormal cells in any such mosaic will tend to lead to a clinically expressed syndrome. The proportion of each constituent clone may vary from tissue to tissue, but is relatively stable in each individual site throughout adult life. Sex mosaics (gynandromorphs) are particularly striking where a difference in the secondary sexual characteristics exists between the normal sexes. For example, in a butterfly with bilateral gynandromorphism, the left side may show the characteristic wing color and pattern of the male, and the light wing, typical female patterning (Fig. 2). See Chimera, Genetics, Sex-linked inheritance

the simultaneous presence in an organism of two or more varieties of homotypic cells differing in genetic structure, or genotype, and (or) in their manifestation of genes in the phenotype. Thus, in mosaicism, characters that are usually mutually exclusive (sex characters, color, biochemical features) appear simultaneously. Examples of mosaicism are bilateral or anterior-posterior mosaic insects or mosaic birds, mottled leaves in plants, red and white facets in the compound eyes of insects, the presence of XX and XY cells in the same individual and other anomalies of certain chromosomal diseases of humans.

Mosaicism results from the following conditions: (1) improper distribution of chromosomes in mitosis, (2) somatic mutations of gene and chromosome-type reconstructions, (3) somatic crossing-over, (4) redistribution of cytoplasmic genetic factors (for example, of plastids in plants) in such a way that they are lost in part of the cells, or (5) the functioning in different cells only of some one or other of the homologous chromosomes or of one of the allelic genes. One differentiates mosaicism based on changes in the genotype (conditions 1, 2, and 3) or plasmotype (condition 4). Phenotypic mosaicism is due to a change in the function of the gene or its dose (condition 5).

[mō′zā·ə‚siz·əm]
(genetics)
The coexistence in an individual of somatic cells of two or more genotypes or karyotypes; it is caused by gene or chromosome mutations, especially mitotic nondisjunction, after fertilization.
McGraw-Hill Dictionary of Scientific & Technical Terms, 6E, Copyright © 2003 by The McGraw-Hill Companies, Inc.

Feedback
Flashcards & Bookmarks ?
Please log in or register to use Flashcards and Bookmarks. You can also log in with
Flashcards ?
My bookmarks ?
+ Add current page to bookmarks
Mentioned in ?
References in periodicals archive ?
Distribution of 3PN embryo Chromosomal status n % Normal (euploid/diploid) 10 33.3 Abnormal 20 66.7 Aneuploidy 3 10.0 Triploidy 13 43.3 Mosaicism 4 13.3 Total 30 100
The Frequency of Chromosomal Euploidy Among 3PN Embryos
On a molecular scale, a selection of the observed long-lived cells contained protein complexes displaying age mosaicism. For example, the primary cilia (hair-like appendages on the outside of cells) of beta cells in the pancreas and neurons contained protein regions of vastly different lifespans.
How Old Are Your Organs? Mix of Young, Old
This was quite surprising since mosaicism in PKS is rarely diagnosed in peripheral lymphocytes.
Pallister-Killian Mosaic Syndrome in an Omani Newborn: A Case Report and Literature Review
The predominant underlying cause of intraorganismal genetic variation was attributed to somatic mutations, and our results highlight potential mechanisms contributing to this genetic mosaicism. Mutation frequency increased in corals of greater size and in those occupying shallower depths.
Somatic Mutation Is a Function of Clone Size and Depth in Orbicella Reef-Building Corals
Mosaicism for a small supernumerary ring X chromosome in a dysmorphic, growth-retarded male: mos47,XXY/48,XXY, +r(X).
The First Case of a Small Supernumerary Marker Chromosome 18 in a Klinefelter Fetus: A Case Report
Linear and whorled naevoid hypermelanosis in a patient with trisomy 4 mosaicism. Clin Exp Dermatol 2015;40(1):45-7.
LINEAR AND WHORLED NEVOID HYPERMELANOSIS WITH DELAYED MILESTONES
According to the company, Dr Chun has identified the first lysophospholipid receptor (1996), first to demonstrate genomic mosaicism in the brain (2001) and its alteration in Alzheimer's disease (2015).
BrainStorm elects Jerold Chun (MD PhD) as chair of new SAB
ligationdependent probe amplification is not suitable for detection of low-grade mosaicism. Eur J Hum Genet 2011;19:1009-12.
Segmental duplication-quantitative fluorescent-polymerase chain reaction: An approach for the diagnosis of Down syndrome in India/Segmental duplikasyon-kantitatif floresan polimeraz zincir reaksiyonu: Hindistan'da Down sendromu tanisina yonelik bir yaklasim
In this situation, the detection of mosaicism is essential.
Combination of Gonadal Dysgenesis and Monosomy X with a Novo Translocation (13,14)
Although IP is mostly a male lethal syndrome, it rarely occurs in males with Klinefelter syndrome or a genomic mosaicism. Gupta et al.
Incontinentia Pigmenti Misdiagnosed as Neonatal Herpes Simplex Virus Infection
The very low-level mosaicism for monosomy 13 (3/117) in this case supports this perspective.
Molecular and Cytogenetic Characterization of a Fetus with Mosaic Ring Chromosome 13: A Very Rare Case
With controlled timing, gene editing was restricted to only the paternal pathogenic mutation, resulting in 72% of all injected embryos having two normal copies of the gene in all cells without any mosaicism. Whole-genome sequencing revealed no additional mutations above the detection limit of the assay.
Opening the door to gene editing?