When the Turks took Constantinople (1453) they used the great Byzantine church Hagia SophiaHagia Sophia
[Gr.,=Holy Wisdom] or Santa Sophia,
Turkish Ayasofya, originally a Christian church at Constantinople (now İstanbul, Turkey) and then a mosque under Muslim rule.
..... Click the link for more information.  as a mosque, and later employed it as a model for Islamic religious structures. To the great open plan of Hagia Sophia with its dominant dome they added smaller domes, half domes, buttresses, and minarets and used Persian tiles and strongly colored painted decoration for interiors. Thus they achieved at Constantinople such superb monuments as the mosque (1550–57) of Sulayman I, the Magnificent, by the architect SinanSinan
, Muslim architect, 1490?–1588?. He is regarded as the greatest of Islamic builders, and his finest achievements lie in his solutions to spatial problems posed by dome-topped structures.
..... Click the link for more information. , and the huge Ahmediyeh mosque (1608–14) of Ahmed I. 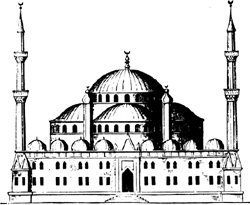 a Muslim place of worship, usually having one or more minarets and often decorated with elaborate tracery and texts from the Koran
Collins Discovery Encyclopedia, 1st edition © HarperCollins Publishers 2005

Feedback
Flashcards & Bookmarks ?
Please log in or register to use Flashcards and Bookmarks. You can also log in with
Flashcards ?
My bookmarks ?
+ Add current page to bookmarks
Mentioned in ?
References in periodicals archive ?
Saudi Gazette quoted the agency as saying that work on the expansion of the mosque would start soon.
Quba Mosque To Accommodate 55,000 Worshippers After Expansion
The authority said work on the expansion of the mosque will start soon.
Over 55,000 worshipers can pray in historic Quba mosque
They then joined thousands of Muslims to perform Aidiladha prayers which was officiated by Imam of the mosque Mohd Khalil Mohd Zari, while the sermon was delivered by the mosque's khatib Datuk Badli Shah Alauddin.
Muslims celebrate Aidiladha with spirit of sacrifice
The expansion is the largest in the mosque's history, following two previous expansions launched by King Fahad and King Abdullah in 1989 and 2008, respectively, costing US$100 billion.
Pilgrims visiting Saudi Arabia to benefit from third expansion of Holy Mosque
Mandhry Mosque was built in 1570, 23 years before Fort Jesus.
Mosque that escaped wrath of Portuguese still standing strong
Why are Muslims visiting the mosques in other parts of the world like Sheikh Zayed Mosque in Abu Dhabi, Putra Mosque and Tuanku Mizan Zainal Abidin Mosque Putrajaya in Malaysia, Hagia Sophia and Blue Mosque in Turkey, Umayyad Mosque in Damascus, Syria, Sultan Qaboos Grand Mosque in Muscat, Oman and many others around the world.
Mosques, shrines nowhere in the religious tourism plan!
DHAKA: A 201-dome mosque in Bangladesh has become the center of attraction for people all around the country.
Bangladesh's 201-dome mosque becomes center of attraction
How come it didn't occur to the mosque management to clean up and spruce up the mosque even on Eid day?
Faisal mosque
In Rangpur, The Keramotia Jam-e-Mosque, Nasirabad Ekramia Jam-e-Mosque, Khasbag Jam-e-Mosque, Satmatha Jam-e-Mosque, Jamtola Jam- e- Mosque, Dhap Jam-e-Mosque, Central Bus Terminal Jam-e-Mosque, Katchari Bazaar Jam-e-Mosque, Kamal Kachna Jam-e-Mosque and many other Mosques remained crowded with Muslim devotees who stayed there for the whole night and offered 'nafl' prayers.
Shab-e-Qadr observed in Rajshahi, Rangpur, Khulna
A truly breathtaking architectural feat, the Sheikh Zayed Grand Mosque is one of the largest mosques in the world, with a capacity for 40,000 worshippers at one time.
5 beautiful mosques to discover during Eid Al Fitr
The opening of the mosque, located at the intersection of Malihah and Emirates Roads, comes just days after 30 mosques were opened in Sharjah ahead of and on the first day of Ramadan, which commenced on 6 May in the UAE.
HH Dr Sheikh Sultan opens Sharjah Mosque on first Friday of Ramadan
The Banja Luka Arnaudija Mosque is the only one of the 15 mosques in this area that were completely destroyed during the war in Bosnia and Herzegovina that has not been reconstructed.
A swastika and a Cyrillic four 'S' on a wall of Arnaudija Mosque in Banja Luka