[′mōd·ər ′end ‚plāt]
(anatomy)
A specialized area beneath the sarcolemma where functional contact is made between motor nerve fibers and muscle fibers.
McGraw-Hill Dictionary of Scientific & Technical Terms, 6E, Copyright © 2003 by The McGraw-Hill Companies, Inc.
The following article is from The Great Soviet Encyclopedia (1979). It might be outdated or ideologically biased.

(also called end plate or motor end apparatus), a structural formation in vertebrate animals and humans on transversely striated muscle fiber at the point where the motor nerve ends. The motor end plate is the basic component of a nerve-muscle junction, which functions as a synapse with chemical transmission; a stimulus is transmitted from nerve to muscle by means of a mediator, and it contracts. The motor nerve loses its myelin sheath at the point of departure of its terminal branch, which forms a number of separate contacts with the surface of the muscle fiber. In the region of these contacts the nerve fiber contains so-called synaptic sacs—mitochondria—and is separated from the membrane of the muscle fiber, which has a folded structure, by a gap approximately 500 angstroms wide. The nerve ending in the region of the motor end plate is surrounded by a Schwann’s cell, which in some sections penetrates the gap between the membranes of the nerve and muscle fibers. (See Figure 1.) 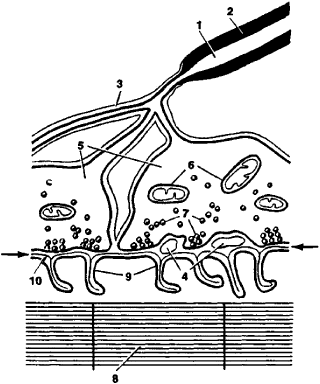