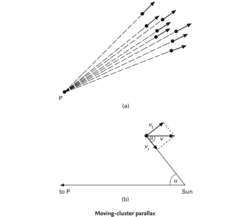 An open cluster, such as the Hyades or the Ursa Major cluster, for which a distance can be derived from the individual radial velocities and proper motions of the member stars. The method is often termed moving-cluster (or expanding-cluster) parallax. The stars in a cluster share a common space motion and, if the system is sufficiently close to Earth, their paths will appear to diverge from or converge towards a point in space (point P in the illustration overleaf). The direction of P is parallel to the space motion of the cluster. Considering each star in turn (illustration B overleaf):
v r = v cos α
v t = v sin α = 4.74μ/p
where v , v r, v t are respectively the space, radial, and tangential velocities of the star in km/s, μ is the proper motion in arc seconds per year, and p is the parallax in arc seconds. Determination of α, μ, and v r for each star gives a value for the parallax of the system.
Collins Dictionary of Astronomy © Market House Books Ltd, 2006
The following article is from The Great Soviet Encyclopedia (1979). It might be outdated or ideologically biased.

where r is the distance to the star expressed in parsecs. If the proper motions of the stars in a moving cluster are measured and thus the position of the radiant determined, then it is sufficient to measure the radial velocity of only one of these stars in order to determine the distance to each star in the cluster. Distances determined in this manner are called group distances. They have considerable accuracy.

Certain star clusters, for example, the Hyades, belong to the class of moving clusters. However, stars of one and the same moving cluster often do not form a noticeable concentration of stars and occupy a large area in the sky. Such moving clusters are detected only as a result of their common proper motions. It is impossible to reveal distant moving clusters since the proper motions of distant stars are very small and inaccurately determined. The most well-known moving cluster is the one in Ursa Major, which includes five bright stars out of the seven forming the dipper and eight fainter stars of the constellation with the same space velocity. It is possible that the Ursa Major group includes yet several dozen more stars (in other regions of the sky), which have proper motions directed toward the radiant of the cluster. The stellar density (number of stars per unit volume) of only those stars that belong to the Ursa Major group is very small: it is many times les-s than the average stellar density in the solar neighborhood. Thus the cluster does not form a substantial spatial concentration.

The coincidence of the space velocities of stars belonging to a certain moving cluster cannot be accidental and indicates the common origin of the stars in the cluster.

[′müv·iŋ ′kləs·tər]
(astronomy)
A star cluster with common motions.
An open star cluster near the sun such that measurements may be made of the individual proper motions of the stars.
McGraw-Hill Dictionary of Scientific & Technical Terms, 6E, Copyright © 2003 by The McGraw-Hill Companies, Inc.

Feedback
Flashcards & Bookmarks ?
Please log in or register to use Flashcards and Bookmarks. You can also log in with
Flashcards ?
My bookmarks ?
+ Add current page to bookmarks
Mentioned in ?
References in periodicals archive ?
Moving object maybe deleted from or inserted into a moving cluster during a period of time.
CC_TRS: Continuous Clustering of Trajectory Stream Data Based on Micro Cluster Life
mooned into difference: now, a re-ordered, moving cluster of light:
Canto 30
It is a little play-acting of the gospel story, often with great care to keep the actual bare feet (sometimes just one foot per person) and the actual water well out of sight, easily done as the washees sit facing the assembly and the washers (the priest and his helpers) make a little moving cluster going from one washee to the next as fast as possible.
Feet first: we kick off the Easter Triduum with a tradition that helps to keep our faith sure-footed
The central five stars of the Big Dipper all belong to the Ursa Major moving cluster also known as Collinder 285.
Plough northwards, to the Big Dipper
The Hyades, a mere 150 light-years from Earth, are often cited as the second-closest cluster following the Ursa Major Moving Cluster (at about 80 light-years).
Touring some nearby star clusters
Instead, it seems more likely that they are slowly separating members of a star cluster known as Collinder 285, the Ursa Major moving cluster. The central five stars of the Big Dipper all belong to this widely spread group.
Grabbing the bear by the tail
Nicknamed the Ursa Major Moving Cluster and formally cataloged as Collinder 285, this sparse grouping probably holds only 17 stars within its weak gravitational grip.
A star-hop in the dipper's bowl
The reason for this is that unlike the 30 or so other similarly moving clusters, S-1 will directly cross paths with our Sun.
Dark Matter Hurricane to storm past earth, say scientists
"Moving clusters within a memetic algorithm for graph partitioning," Mathematical Problems in Engineering, Vol.
Optimization by Simulated Catalytic Reaction: Application to Graph Bisection
The propagation environment contains moving clusters and fixed clusters, which are located in the three regions along the roadside.
Research on Spatial Channel Model for Vehicle-to-Vehicle Communication Channel in Roadside Scattering Environment
Although busy here, the guides are slick, moving clusters of visitors around each artefact, ensuring very little overcrowding.
Greece lightning; Can you cruise the Greek islands in a long weekend break? KEELEY BOLGER gives it her best shot
Reflectance of errors attributable to emerging, splitting, or moving clusters is considered in this approach.
Evaluation of Subspace Clustering Using Internal Validity Measures