mulberry, common name for the Moraceae, a family of deciduous or evergreen trees and shrubs, often climbing, mostly of pantropical distribution, and characterized by milky sap. Several genera bear edible fruit, e.g., Morus, (true mulberries), Ficus (the fig genus), and Artocarpus, which includes the breadfruit and related species. The related hemp family, whose plants do not contain latex, were formerly included in this family.

Fiber plants of the mulberry family include the paper mulberry (Broussonetia papyrifera) and the upas tree (Antiaris toxicara) of the East Asian tropics, where the bast fiber is utilized for rough fabrics and for paper, often after a crude retting process. The latex of the upas [Malay,=poison tree] contains a cardiac glycoside used for arrow poison; the similarly employed strychnine tree of the logania family is sometimes also called upas.

The breadfruit (Artocarpus ultilis) is cultivated as a staple food plant in the Pacific tropics and in the West Indies, where it was introduced from Polynesia in the late 18th cent.; the Bounty was carrying breadfruit plants to Jamaica when the famous mutiny occurred. The compound, high-carbohydrate fruit has a taste when cooked that resembles that of fresh bread or cooked potatoes. The tree's wood, fiber, and latex are also variously utilized locally. The important fig genus includes fruit trees, ornamentals (e.g., the rubber plant), and several species renowned in the religion and legends of India (e.g., the banyan and the bo tree). 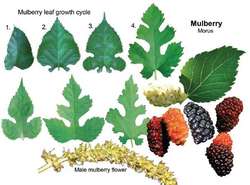 50 ft (15m) Delicious berries have powerful antioxidants, cancer prevention, life extension, cleans blood, strengthens kidneys, hearing, vision, diabetes, constipation, anemia, graying hair. The berries are great for improving vision. The bark is a laxative- leaves are an amalase inhibitor so they block the breakdown of carbohydrates into simple sugars, so it acts as a diet aid by preventing you from being able to absorb the carbohydrates. Root tea is used for tapeworms, urinary problems, bowel problems, diarrhea, dystentery. Sap used externally for ringworm. You can collect the leaves in the fall, dry them and use them as tea. Leaves used for heart conditions, cholesterol, liver problems (cleans liver), cancer, digestive issues. It is said there is almost nothing the leaves, bark, and gum resin boiled as tea cannot help alleviate from the body. The berries are great when dried. Mix with nuts and grind into pulp and make into "candy" balls. Male and female trees required for fruit.
Edible Plant Guide © 2012 Markus Rothkranz

1. any moraceous tree of the temperate genus Morus, having edible blackberry-like fruit, such as M. alba (white mulberry), the leaves of which are used to feed silkworms
2. any of several similar or related trees, such as the paper mulberry and Indian mulberry
3.
a. a dark purple colour
b. (as adjective): a mulberry dress
Collins Discovery Encyclopedia, 1st edition © HarperCollins Publishers 2005

Feedback
Flashcards & Bookmarks ?
Please log in or register to use Flashcards and Bookmarks. You can also log in with
Flashcards ?
My bookmarks ?
+ Add current page to bookmarks
Mentioned in ?
References in classic literature ?
'Sit down, sit down,' said Sir Mulberry; 'I want to talk to you.'
'Not for the world,' rejoined Sir Mulberry. Thus speaking, he leaned over, as if to replace her in her chair; but the young lady, making a violent effort to disengage herself, he lost his balance, and measured his length upon the ground.
Ralph DID shrink, as the indignant girl fixed her kindling eye upon him; but he did not comply with her injunction, nevertheless: for he led her to a distant seat, and returning, and approaching Sir Mulberry Hawk, who had by this time risen, motioned towards the door.
'Do you know me, you old madman?' asked Sir Mulberry.
'Who brought him to you first?' pursued Sir Mulberry; 'and how, without me, could you ever have wound him in your net as you have?'
'Ay, that's the word,' interposed Sir Mulberry, with a laugh.
'Especially as there was nothing to be got by it--eh?' sneered Sir Mulberry.
The eyes of the two worthies met, with an expression as if each rascal felt that there was no disguising himself from the other; and Sir Mulberry Hawk shrugged his shoulders and walked slowly out.
View in context
TED BAKER'S finance boss Charles Anderson has quit after 17 years to join luxury bag brand Mulberry.
Ted Baker's finance chief Charles Anderson bags a role at Mulberry
(Alliance News) - Mulberry Group PLC said Thursday Ted Baker PLC finance executive Charles Anderson will join the luxury leather bags maker as its new finance chief from early October.
Mulberry Hires Ted Baker Executive Anderson As New Finance Chief
Mulberry (Morus alba L.) is native to northern and central China.
Assessment of mulberry leaf as a potential feed supplement for animal feeding in P.R. China
(2013) studied the drying kinetics and quality attributes of mulberry (Morus alba.
COMPARISON OF DRYING PROCESS AND PRESERVATIVES ON DRYING KINETICS, TEXTURE AND ANTIOXIDANTS RETENTION IN MULBERRY FRUITS