[′məl·tə‚plī·ər ′fōd·ō‚tüb]
(electronics)
A phototube with one or more dynodes between its photocathode and the output electrode; the electron stream from the photocathode is reflected off each dynode in turn, with secondary emission adding electrons to the stream at each reflection. Also known as electron-multiplier phototube; photoelectric electron-multiplier tube; photomultiplier; photomultiplier tube.
McGraw-Hill Dictionary of Scientific & Technical Terms, 6E, Copyright © 2003 by The McGraw-Hill Companies, Inc.
The following article is from The Great Soviet Encyclopedia (1979). It might be outdated or ideologically biased.

(also photomultiplier, photomultiplier tube), a vacuum-tube device in which an electron flux emitted by a photocathode upon exposure to optical radiation is amplified in a multiplier structure as a result of secondary electron emission. The electron flux emitted by an illuminated photo-cathode is called a photocurrent. The current in the circuit of the anode, which collects the secondary electrons, is substantially higher than the primary photocurrent, usually by a factor of 105or more. The multiplier phototube was first proposed and developed by L. A. Kubetskii between 1930 and 1934.

The most widely used multiplier phototubes have a secondary-emission coefficient σ > 1. The electron flux is amplified by a system of individual dynodes, that is, individual U-shaped, box-type, or venetian-blind electrodes with a linear arrangement (see Figure 1) or, less often, a circular arrangement. To accelerate and focus electrons, the cathode chamber (which collects the electrons escaping from the photocathode into a beam and directs the beam to the input of the dynode system), the dynodes, and the anode are supplied with specific potentials relative to the photocathode by means of a high-voltage source, which has a voltage of 600–3,000 volts. Electrostatic focusing, magnetic focusing, or focusing in crossed electric and magnetic fields is employed. 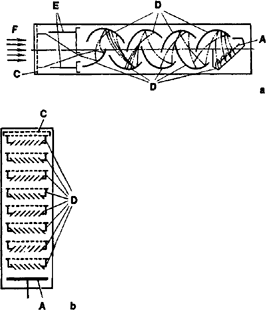 Multiplier phototubes with the multiplier structure in the form of a continuous dynode—either single-channel or multiple-channel—are also used. A single-channel dynode has an active film (σ > 1) on its inner surface and a distributed electrical resistance; a multiple-channel dynode consists of microchannel plates. When a channel is connected to a high-voltage source, an electric field is generated in the channel. The field accelerates secondary electrons, which collide repeatedly with the inner walls of the channel. With each collision, secondary electron emission from the surface of the active film occurs.

The photocathodes of multiplier phototubes are made from semiconductors based on compounds of elements from group I or group III of the periodic system and elements from group V. Such compounds include Cs3Sb and GaAs. Semitransparent photocathodes are usually deposited on the inner surface of the transparent window of a glass envelope. The materials used in the fabrication of individual dynodes include Cs3 Sb deposited as a film on a metallic substrate, the alloys CuBe and CuAlMg, and O2-treated epitaxial films of GaP on Mo. The channels of distributed dynodes are fabricated from glass with a high lead content; after heat treatment in H2, the channels have a surface-layer resistivity of 107–1010 ohm-meters.

Multiplier phototubes are used mainly in nuclear physics (seeSCINTILLATION COUNTER) and in equipment for the study of short-term processes. They are also employed in optical devices, television equipment, and laser devices.

In the 1960’s, a multiplier phototube was developed in which the photocurrent is amplified by bombarding a p-n junction semiconductor crystal with electrons that have sufficient energy to produce electron-hole pairs in the crystal. Such multiplier phototubes are called hybrids.