(nā`dər) [Arab.,=opposite], in astronomy, the point on the celestial spherecelestial sphere,
imaginary sphere of infinite radius with the earth at its center. It is used for describing the positions and motions of stars and other objects. For these purposes, any astronomical object can be thought of as being located at the point where the line of sight
..... Click the link for more information.  directly opposite the zenithzenith,
in astronomy, the point in the sky directly overhead; more precisely, it is the point at which the celestial sphere is intersected by an upward extension of a plumb line from the observer's location.
..... Click the link for more information. , i.e., directly beneath the observer.
The Columbia Electronic Encyclopedia™ Copyright © 2013, Columbia University Press. Licensed from Columbia University Press. All rights reserved. www.cc.columbia.edu/cu/cup/

(nay -deer) The point on the celestial sphere that lies directly beneath an observer and is therefore unobservable. It is diametrically opposite the observer's zenith and with the zenith lies on the observer's meridian.
Collins Dictionary of Astronomy © Market House Books Ltd, 2006

[′nā·dər]
(astronomy)
That point on the celestial sphere vertically below the observer, or 180° from the zenith.
(oceanography)
The point on the sea floor that lies directly below the sonar during a survey.
McGraw-Hill Dictionary of Scientific & Technical Terms, 6E, Copyright © 2003 by The McGraw-Hill Companies, Inc. 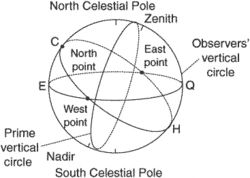 That point on the celestial sphere directly beneath the observer and directly opposite the zenith (i.e., 180° from the zenith, so that the zenith, nadir, and the center of the earth are in one straight line). Also called a nadir point.
An Illustrated Dictionary of Aviation Copyright © 2005 by The McGraw-Hill Companies, Inc. All rights reserved

the point on the celestial sphere directly below an observer and diametrically opposite the zenith
Collins Discovery Encyclopedia, 1st edition © HarperCollins Publishers 2005