Pythagoras (pĭthăgˈərəs), c.582–c.507 B.C., pre-Socratic Greek philosopher, founder of the Pythagorean school. He migrated from his native Samos to Crotona and established a secret religious society or order similar to, and possibly influenced by, the earlier Orphic cult. We know little of his life and nothing of his writings. Since his disciples came to worship him as a demigod and to attribute all the doctrines of their order to its founder, it is virtually impossible to distinguish his teachings from those of his followers. The Pythagoreans are best known for two teachings: the transmigration of souls and the theory that numbers constitute the true nature of things. The believers performed purification rites and followed moral, ascetic, and dietary rules to enable their souls to achieve a higher rank in their subsequent lives and thus eventually be liberated from the “wheel of birth.” This belief also led them to regard the sexes as equal, to treat slaves humanely, and to respect animals. The highest purification was “philosophy,” and tradition credits Pythagoras with the first use of the term. Beginning with the discovery that the relationship between musical notes could be expressed in numerical ratios (see Greek music), the Pythagoreans elaborated a theory of numbers, the exact meaning of which is still disputed by scholars. Briefly, they taught that all things were numbers, meaning that the essence of things was number, and that all relationships—even abstract ethical concepts like justice—could be expressed numerically. They held that numbers set a limit to the unlimited—thus foreshadowing the distinction between form and matter that plays a key role in all later philosophy. The Pythagoreans were influential mathematicians and geometricians, and the theorem that bears their name is witness to their influence on the initial part of Euclidian geometry. They made important contributions to medicine and astronomy and were among the first to teach that the earth was a spherical planet, revolving about a fixed point. At the end of the 5th cent. B.C. the Pythagoreans were forced to flee Magna Graecia when people grew enraged at their interference with traditional religious customs; many were killed. A short-lived Neo-Pythagoreanism developed at the beginning of the Christian era; it borrowed some elements from Jewish and Hellenistic thought and greatly emphasized the mystical element in Pythagorean ideas. 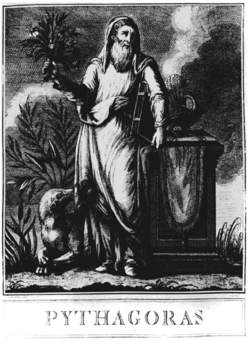 ?580--?500 bc, Greek philosopher and mathematician. He founded a religious brotherhood, which followed a life of strict asceticism and greatly influenced the development of mathematics and its application to music and astronomy
Collins Discovery Encyclopedia, 1st edition © HarperCollins Publishers 2005

Pythagoras is most famous for Pythagoras's Theorem but other important postulates are attributed to him, e.g. the sum of the angles of a triangle is equal to two right angles.
This article is provided by FOLDOC - Free Online Dictionary of Computing (foldoc.org)