nettle, common name for the Urticaceae, a family of fibrous herbs, small shrubs, and trees found chiefly in the tropics and subtropics. Several genera of nettles are covered with small stinging hairs that on contact emit an irritant (formic acid) which produces a skin rash sometimes called urticaria (see hives). The tropical American genus Urera is very powerful and sometimes dangerous, as are some members of the Australasian genus Decndrocnide. Stinging nettles in the United States include species of Urtica, widely distributed, and Laportea canadensis, the Canada nettle or wood-nettle, a characteristic plant of eastern forests. Dendrocnide excelsa, the Australian nettle tree, reaches 90 ft (27.4 m) in height, though it is less toxic than the smaller stinging bush or gympie gympie, D. moroides, which may grow to 10 ft (3 m). Various plants of the family supply fiber, e.g., ramie, or China grass (Boehmeria nivea), native to SE Asia. Its valuable fiber is extremely strong, silky, and durable, but very difficult to extract. Because of the high quality of its various products (e.g., fabric, paper, and cordage) it has been cultivated experimentally in the United States and other countries. The young foliage of many temperate nettles supplies edible greens that are cooked like spinach. Various unrelated plants are sometimes also called nettles, e.g., the Old World nettle trees of the elm family and the prickly horse nettle of the nightshade family. The nettle family is classified in the division Magnoliophyta, class Magnoliopsida, order Urticales.
The Columbia Electronic Encyclopedia™ Copyright © 2022, Columbia University Press. Licensed from Columbia University Press. All rights reserved. 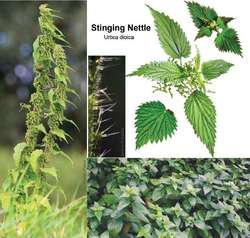 Feedback
Flashcards & Bookmarks ?
Please log in or register to use Flashcards and Bookmarks. You can also log in with
Flashcards ?
My bookmarks ?
+ Add current page to bookmarks
Mentioned in ?
References in periodicals archive ?
In a six-month trial that included 620 men, 81% of men who took stinging nettle reported improved lower urinary tract symptoms compared with only 16% of men who took a placebo (Safarinejad 2005).
Prostatitis and Stinging Nettle: Does it work?
That, admittedly, is small beer compared to the achievements of last year's winner Philip Thorne, who swallowed a record-breaking 104 feet worth of nettles. The Devon athlete is a veritable Pele among competitive plant eaters.
World champs at nettle eating snubbed
Retired school teacher Lindy Rogers, 67, won the women's category by getting through 46ft of nettles.
Man becomes World Stinging Nettle champion after devouring 58ft of the plant; Annual eccentric Dorset contest sees fierce competition among nettle eaters - with a few secret winning techniques
During spring in 2018, a host of stinging nettles U.
Problems for the Yellow Admiral butterfly Vanessa itea at Notting Hill, Victoria
Stinging nettles are thought to be able to reduce the amount of histamine in the body caused by allergies.
Deliberately stinging yourself with nettles will stop hay fever, sufferer says; Stinging nettles are thought to be able to reduce the amount of histamine in the body caused by allergies
"We actually had to bring the nettles into our polytunnels so we could grow them in the winter, which is quite unusual to do."
Alnwick brew carries a sting; NEW BEER IS MADE FROM NETTLES
Genetic testing of samples revealed differences in some of the sea nettle jellyfish.
Atlantic Sea Nettle Jellyfish Found To Be Two Distinct Species
One final thing to remember is that the nettle can spread rapidly.
Taking the sting out of nettles; YOU PLAN YOUR TIME TOGETHER With Janet Tansley For most of us, nettles are something to be feared - especially if we are wearing shorts - but JANET TANSLEY suggests we look at how useful they really are
A number of structural classes have been reported from extracts of nettle and selected examples are shown in Fig.
Lipophilic stinging nettle extracts possess potent anti-inflammatory activity, are not cytotoxic and may be superior to traditional tinctures for treating inflammatory disorders
DAVID TANIS NYT SYNDICATE AT the market the other day (a rather chilly spring day), a vendor had gorgeous bunches of wild stinging nettles in addition to a farm-grown bok choy, mustard, pea shoots, dandelion and young chard.
Farro pasta with nettles: Recipe worth the trouble
(4 oz.) lightly packed stinging nettle leaves or baby spinach
What's in season nettles