nitrogen cycle, the continuous flow of nitrogen through the biosphere by the processes of nitrogen fixation, ammonification (decay), nitrification, and denitrification. Nitrogen is vital to all living matter, both plant and animal; it is an essential constituent of amino acids, which form proteins of nucleic acids, and of many other organic materials.

Although the earth's atmosphere is 78% nitrogen, free gaseous nitrogen cannot be utilized by animals or by higher plants. They depend instead on nitrogen that is present in the soil. To enter living systems, nitrogen must be “fixed” (combined with oxygen or hydrogen) into compounds that plants can utilize, such as nitrates or ammonia. A certain amount of atmospheric nitrogen is fixed by lightning and by some cyanobacteria (blue-green algae). But the great bulk of nitrogen fixation is performed by soil bacteria of two kinds: those that live free in the soil and those that live enclosed in nodules in the roots of certain leguminous plants (e.g., alfalfa, peas, beans, clover, soybeans, and peanuts). Among the free-living forms are species of Clostridium, discovered c.1893 by Sergei Winogradsky, and Azotobacter, discovered c.1901 by M. W. Beijerinck. Both Clostridium and Azotobacter are generally present in agricultural soils, and both are saprophytes, i.e., they use the energy from decaying organic matter in the soil to fuel soil processes, including nitrogen fixation.

Bacteria that live in the roots of legumes are of the genus Rhizobium, first isolated c.1888 by Beijerinck. These rod-shaped bacteria enter the roots chiefly through the root hairs and then work their way to the inner root tissues. There they stimulate the growth of tumorlike nodules. Within the nodules the bacteria develop into forms called bacteroids, which live in a symbiotic (mutually beneficial) relationship with the green plant. The bacteroids take carbohydrates from the plant for energy to fix nitrogen and synthesize amino acids; the plants take the amino acids elaborated in the nodule to build plant tissue. Animals in turn consume the plants and convert plant protein into animal protein. Rhizobia can be found free-living in the soil, but they cannot fix nitrogen in the free state, nor can the legume root fix nitrogen without Rhizobia.

The exact biochemistry of nitrogen fixation within the nodule is not yet understood. It is estimated that more than 300 lbs of nitrogen per acre (340 kg per hectare) can be fixed by fields of alfalfa and other legumes. After a harvest legume roots left in the soil decay, returning organic nitrogen compounds to the soil for uptake by the next generation of plants. For this reason crop rotation in which a leguminous crop is rotated with a nonleguminous one is a common practice for maintaining soil fertility.

Other Aspects of the Nitrogen Cycle

Decomposing animal remains and animal wastes also return organic nitrogen to the soil as ammonia. Many different kinds of decay microorganisms participate in ammonification. The nitrifying bacteria of the genus Nitrosomonas oxidize the ammonia to nitrites, and Nitrobacter oxidize the nitrites to nitrates. The nitrates can then be taken up again by the green plant. The cycle of fixation-decay-nitrification-fixation can proceed indefinitely without any nitrogen being returned to a gaseous state. But still another group of microorganisms, the denitrifying bacteria, can reduce nitrates all the way to molecular nitrogen. Denitrification occurs only in the absence of oxygen and is not common in well-cultivated soils.

Nitrogen fixation can also be accomplished artificially by various methods (see nitrogen). Humans annually fix vast amounts of nitrogen for industrial purposes and for use as fertilizer. Unfortunately, large-scale legume cultivation and artificial fixation may be upsetting the natural nitrogen cycle in the biosphere. There is some question whether natural denitrification can keep pace with fixation. For one thing, run-off of nitrate fertilizer can cause eutrophication of lakes and streams (see water pollution) and can foul drinking supplies. Another environmental problem is that inorganic fertilizers tend to depress legume fixation. As a consequence, root tissue remaining after harvest is poorer, and thus more fertilizer must be applied the following year.
The Columbia Electronic Encyclopedia™ Copyright © 2022, Columbia University Press. Licensed from Columbia University Press. All rights reserved. 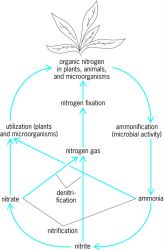 Diagram of the nitrogen cycle

Nitrogen exists in nature in several inorganic compounds, namely N2, N2O, NH3, NO2-, and NO3-, and in several organic compounds such as amino acids, nucleotides, amino sugars, and vitamins. In the biosphere, biological and chemical reactions continually occur in which these nitrogenous compounds are converted from one form to another. These interconversions are of great importance in maintaining soil fertility and in preventing pollution of soil and water.

An outline showing the general interconversions of nitrogenous compounds in the soil-water pool is presented in the illustration. There are three primary reasons why organisms metabolize nitrogen compounds: (1) to use them as a nitrogen source, which means first converting them to NH3, (2) to use certain nitrogen compounds as an energy source such as in the oxidation of NH3 to NO2- and of NO2- to NO3-, and (3) to use certain nitrogen compounds (NO3-) as terminal electron acceptors under conditions where oxygen is either absent or in limited supply. The reactions and products involved in these three metabolically different pathways collectively make up the nitrogen cycle.

There are two ways in which organisms obtain ammonia. One is to use nitrogen already in a form easily metabolized to ammonia. Thus, nonviable plant, animal, and microbial residues in soil are enzymatically decomposed by a series of hydrolytic and other reactions to yield biosynthetic monomers such as amino acids and other small-molecular-weight nitrogenous compounds. These amino acids, purines, and pyrimidines are decomposed further to produce NH3 which is then used by plants and bacteria for biosynthesis, or these biosynthetic monomers can be used directly by some microorganisms. The decomposition process is called ammonification.

The second way in which inorganic nitrogen is made available to biological agents is by nitrogen fixation (this term is maintained even though N2 is now called dinitrogen), a process in which N2 is reduced to NH3. Since the vast majority of nitrogen is in the form of N2, nitrogen fixation obviously is essential to life. The N2-fixing process is confined to prokaryotes (certain photosynthetic and nonphotosynthetic bacteria). The major nitrogen fixers (called diazotrophs) are members of the genus Rhizobium, bacteria that are found in root nodules of leguminous plants, and of the cyanobacteria (originally called blue-green algae).

the natural circulation of nitrogen by living organisms. Nitrates in the soil, derived from dead organic matter by bacterial action (see nitrification, nitrogen fixation), are absorbed and synthesized into complex organic compounds by plants and reduced to nitrates again when the plants and the animals feeding on them die and decay
Collins Discovery Encyclopedia, 1st edition © HarperCollins Publishers 2005

Feedback
Flashcards & Bookmarks ?
Please log in or register to use Flashcards and Bookmarks. You can also log in with
Flashcards ?
My bookmarks ?
+ Add current page to bookmarks
Mentioned in ?
References in periodicals archive ?
(2006), this paper aims to evaluate the level of human interference on BLPB's nitrogen cycle due to biological nitrogen fixation (BNF) in cropland and pastures, use of fertiliser in agriculture and anthropogenic depositions (N[O.sub.y] and N[H.sub.x]) derived from consumption of fossil fuel, biomass burning and losses of nitrogenous fertiliser.
Nitrogen cycle and ecosystem services in the Brazilian La Plata Basin: anthropogenic influence and climate change/Ciclo de nitrogenio e servicos ecossistemicos na Bacia do Prata Brasileira: influencia antropogenica e mudancas climaticas
Most of the manure nitrogen can be returned to the soil, thereby completing the nitrogen cycle.
Subterranean fixation
Although carbon dioxide may get more press, "the nitrogen cycle has been altered more than any other basic element cycle," says John Abet, vice president for research and public service at the University of New Hampshire.
Global nitrogen: cycling out of control
Non-mycorrhizal uptake of amino acids by roots of the alpine sedge Kobresia myosurioides: implications for the alpine nitrogen cycle. Oecologia 108:488-494.
SEASONAL PARTITIONING OF NITROGEN BY PLANTS AND SOIL MICROORGANISMS IN AN ALPINE ECOSYSTEM
But the ER-2 observations detected much lower levels of nitrogen oxides ([NO.sub.x]) than scientists expected, suggesting they had overemphasized the importance of the nitrogen cycle. The measurements also showed higher-than-anticipated levels of chlorine monoxide (CIO), known to play a key role in destroying ozone in the polar regions.
Ozone layer succumbs to assault
While we do not know what the full effects of changing the nitrogen cycle will be, we performed experiments all over the world and believe that these changes will be global in extent," said Beman.
Rising greenhouse gases could have significant impacts on ocean life
Ecosystem analysis of the tallgrass prairie: nitrogen cycle. Ecology 63:1342-1351.
Ungulate vs. landscape control of soil C and N processes in grasslands of Yellowstone National Park
"This report that ocean acidification decreases nitrification (the amount of nitrogen) is extremely important because of the crucial role of the nitrogen cycle in biogeochemical processes-processes that take place throughout the oceans," said Garrison.
Ocean acidification alters nitrogen cycling in world seas
Mostly mediated by bacteria that live in legume plant roots and soils, nitrogen fixation and other components of the nitrogen cycle weave and wind through the atmosphere, plants, subsurface plant roots, and soils; the nitrogen cycle involves many natural feedback relationships between plants and microorganisms.
Ecosystems overloaded with nitrogen, courtesy humans
Litter decomposition is a major component of the nitrogen cycle and varies among species (Melillo et al.
Litter decomposition and nitrogen dynamics in aspen forest and mixed-grass prairie