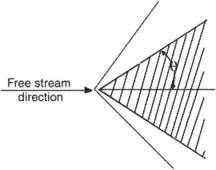 When ball is in the center, it means that the aircraft is level. If the aircraft is inclined to either side, the ball will be not be in the center anymore.
A shock wave that forms on a sharp-pointed object moving through the air at a speed greater than the speed of sound. Air passing through an inclined shock wave is slowed down, but if the wave angle is less than about 70° it still will be supersonic. The area bounded by the sides of an oblique shock wave forms the Mach cone. Also known as an oblique shock. 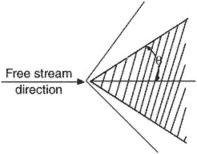 Feedback
Flashcards & Bookmarks ?
Please log in or register to use Flashcards and Bookmarks. You can also log in with
Flashcards ?
My bookmarks ?
+ Add current page to bookmarks
Mentioned in ?
References in periodicals archive ?
The 14-X B model lower surface was designed based on the two-dimensional compressible flow (oblique shock wave relationships) and expansion wave (Prandtl-Meyer theory), considering the simplest case, that is, no viscous flow, calorically perfect air ([gamma] = 1.4), and scramjet engine with power off [11].
The static pressure measurements at the lower surface of the 14-X B model are compared with the static pressure evaluated at the same freestream conditions via no viscous flow, calorically perfect air ([gamma] = 1.4) oblique shock wave relationships, and computational fluid dynamics (CFD) simulations using the ANSYS FLUENT software (Figure 9).
Experimental Investigation of Brazilian 14-X B Hypersonic Scramjet Aerospace Vehicle
Oblique shock waves, expansion waves and shock wave interactions are mainly considered.
Design and investigation of hypersonic scramjet inlet for mach number of 10 and its performance at various flight regimes
The compression ramp is designed to create a series of oblique shock waves.
A numerical study for flow excitation and performance of Rampressor inlet considering rotor motion
In a 26-inch fully retracted aft position, at the design cruise Mach number of 3.2, an oblique shock system exists with the lead shock stretched between the cone's apex and the nacelle lip, to yield a maximum total pressure recovery of 40:1.
Powering out of trouble
Readers should have background in basic shock wave concepts, including the equations for an oblique shock in a steady flow of a perfect gas.
Shock wave dynamics; derivatives and related topics
Subsequent chapters address steady one-dimensional flow, normal shock waves, oblique shock and expansion waves, compressible flow equations, similarity rule, and two-dimensional compressible flows, among other topics, ending with chapters on ramjet, and jets.
Applied gas dynamics
If the exit pressure is slightly less than the back pressure, then oblique shock waves occur at the nozzle exit as shown in figure 2.
A comparative study of pitot tube measurements and CFD results for supersonic nozzles employed for gas atomization of liquid metals
Oblique Shock waves and normal shocks are very small regions in the gas where the gas properties change by a large amount.
Effect of variable shape ramp in ramjet engine diffuser
It can be seen from Figure 4(a) that an obvious oblique shock formed at the first fuel injection orifice, and then it was followed by a long shock train.
Parametric study of fuel distribution effects on a kerosene-based scramjet combustor
Among the titles are the periodic and quasi-periodic motion of point vortices, vortices in superconductors, vortex dipole coordinates on spheres, the interaction between longitudinal vortices and normal and oblique shocks, and typical vortex phenomena in flow fields past space vehicles.
Vortex dominated flows; a volume celebrating Lu Ting's 80th birthday