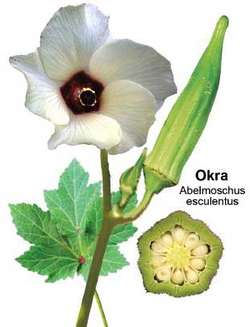 Also called Ochro, Okoro, Quimgombo, Quingumbo, Ladies Fingers and Gumbo. Hibiscus-like flowers and seed pods that are delicious when picked young and tender. Eat raw, steamed of cooked.. Ripe seeds have been used as a substitute for coffee and can be dried and powdered for storage. In Mallow family so its very mucilaginous, meaning it emits a slimy goo when cooked. Very good for you, high in fiber, unsaturated fats, oleic and linoleic acids.
Edible Plant Guide © 2012 Markus Rothkranz
The following article is from The Great Soviet Encyclopedia (1979). It might be outdated or ideologically biased.

(Hibiscus esculentus), an annual plant of the mallow family. Height to 1.5 m; it is similar to the cotton plant in its outward appearance and flowers. It is native to East Africa. The unripe, podlike fruits are used for food as vegetables, rough fibers are extracted from the stalks, and a coffee substitute is prepared from the seeds. It is cultivated in tropical and subtropical countries, North America, and southern Europe. In the USSR it is grown in the Transcaucasian region.

Feedback
Flashcards & Bookmarks ?
Please log in or register to use Flashcards and Bookmarks. You can also log in with
Flashcards ?
My bookmarks ?
+ Add current page to bookmarks
Mentioned in ?
References in periodicals archive ?
The residual value of acetamiprid in eggplant and okra are given in Table-2.
Assessment of Imidacloprid and Acetamiprid Residues in Okra and Eggplant Grown in Peri-Urban Areas and their Dietary Intake in Humans
The temperature was measured in the topsoil with a portable digital thermometer in the morning, between 10 and 11 hours, before irrigation, in the canopy region of okra.
Organic fertilizer and irrigation in changes the chemical properties of a Fluvent and okra production
aureus without okra crude polysaccharides administration; P1, P2, P3: okra crude polysaccharides doses 25, 50, 75, and 100mg/kg BW, respectively).
Crude Polysaccharides from Okra Pods (Abelmoschus esculentus) Grown in Indonesia Enhance the Immune Response due to Bacterial Infection
'Parbhani Kranti', a yellow vein mosaic-resistant okra. Hort Science., 1986; 21(6) : 1470-1471.
Screening of Okra [Abelmoschus esculentum (L.) Moench] Genotypes for Yellow Vein Mosaic Virus (YVMV) Resistance Under Natural Diseases Pressure Condition
High purity bio-methane gas was calculated with pure okra shell and okra shell when mixed with orange peel, in an acidic medium under mesophilic conditions.
Design a mechanical- biological system for treatment biological wastes (orange peels, peel peas, okra shell) with optimization and qualification for liberal and residue products
However, the stimulating effect of lower doses of gamma irradiation on growth of okra plants might be due to stimulation of cell division and processes that affect synthesis of nucleic acids [38].
Effects of Gamma Irradiation on Agromorphological Characteristics of Okra (Abelmoschus esculentus L. Moench.)
The global okra seeds market is segmented on a regional basis into Asia Pacific, North America, Europe, and the Rest of the World.
Okra Seeds Market 2019 Share, Trends, Growth, Industry segments, Production and Consumption Analysis, Brands Statistics and Overview by Top Manufacturers 2023
Nine okra varieties were tested to evaluate the physico-morphic characters imparting resistance or susceptibility to H.
Relationship of Physico-Morphic Characters of Okra Cultivars with their Resistance to Helicoverpa armigera
'I have been working on Okra for two and a half years and my mission is to make sure that every single person on this planet has access to energy 24/7 so that they can live modern, technology driven lifestyles.
Cheap, clean and efficient: The firm leading Cambodia's solar revolution
Given the above, this experiment aimed to evaluate the production and quality of okra fruits produced with mineral and organic fertilization.
Production and quality of okra produced with mineral and organic fertilization/Producao e qualidade de quiabo produzido com adubacao mineral e organica
The Choctaw Native Americans gave us file, dried sassafras leaves; okra came to us from Africa; and sausage was an OldWorld addition.
gumbo ya-ya: Colder weather means the time is right for getting out the gumbo pot
Okra's immature fruits (green pods), which are consumed as vegetables, can be used in salads, soups and stews, fresh or dried, fried or boiled and in making pickles.The pods have a mucilaginous (sticky) consistency after cooking.
Growing, eating super food okra