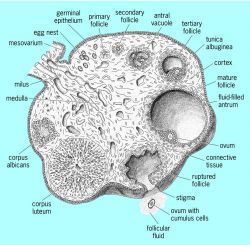 [‚ō·ə′jen·ə·səs]
(physiology)
Processes involved in the growth and maturation of the ovum in preparation for fertilization.
McGraw-Hill Dictionary of Scientific & Technical Terms, 6E, Copyright © 2003 by The McGraw-Hill Companies, Inc.